Serendipity: The Story of Building a Dream Ship

Harvard Law School must not be as hard as they say. At least Peter Murray had the time and energy, while a student there, to build an entire 30-foot schooner. Before launching he’d even passed his Massachusetts bar exam.

Credential in hand, he sailed off to Maine with his wife, subsequently passed another state bar exam and then began work as a law clerk to the federal judge in Portland.

So it’s obvious that Murray’s a very smart guy. What you may not know at the start of this fascinating account is the state of the boatbuilding world in 1965, when he entered law school and began his ambitious project. Wooden boats had been built everywhere for centuries, of course, but by the 1960s the many skills that a builder needed to have were rapidly becoming extinct as fiberglass and other synthetics replaced wood, canvas, cotton caulking, bronze and other traditional materials.

“Sourcing” these things to build his boat, in fact, took up lots of Murray’s time as he learned the law at Harvard. He had to learn about steam-bending from books and absorb lessons in caulking from an old hand on the Portland waterfront. He got to know lumber suppliers from Boston to Maine, was obliged to scour ship chandleries up and down the coast for scarce fittings, make endless phone calls to track down hundreds of items, many of them only obtainable in small quantities from companies that were near bankruptcy as traditional boatbuilding not-so-slowly collapsed.

He persevered, working from a design he’d seen in a paperback magazine: “20 Boats You Can Build.” The boat that caught Murray’s eye was Nimble, designed by Vere B. Crockett of Camden. He struck up a correspondence with Crockett, who assured him it would be “feasible for an amateur to build the little schooner.”

Serendipity—the name of Murray’s schooner as well as the book’s title—is staggeringly detailed. Some readers may be put off by his descriptions of drilling the hole for his propeller shaft or how he fabricated some of the fittings for his spars; how he, his wife, and friends steamed and bent the hull’s ribs; what’s involved in bending the sides of a small yacht’s cabin; the ingenious way he hoisted his little diesel engine aboard.

The book is filled with these descriptions—which together tell the story of how a really dedicated amateur and his family-and-friends crew planned and executed a very complex project. What’s also notable is Murray’s sense of the wooden boat world then and now—how a whole industry nearly collapsed but then, thanks to WoodenBoat magazine and a growing appreciation of wooden boatbuilding as a craft worth celebrating and preserving, it is again thriving.

More than once Murray looks back on a particular operation that looked daunting at the start as “a piece of cake” once it was finished, and it’s tempting to conclude that building Serendipity in the years since the wooden boat revival would be the same thing. At least he’d have more places and people to turn to as he searched out supplies for his project.

Serendipity the book doesn’t list a publisher, so I emailed Murray to ask where to get a copy. He responded that Serendipity “was published by Bookbaby.com, an online semi-self publisher. They will fill orders for the book, have it available on their website, and have it on Amazon. The retail price of the edition you have is $15.95.  It is also in stock at Print Bookstore in Portland.

I do not fill orders directly myself, but refer people who want it to Amazon or Print. If another bookstore wanted it, I would be glad to make sure that it can get it from Bookbaby.”

(Note for sharp-eyed readers: like some other self-published books, Serendipity apparently didn’t go through a rigorous copy-edit, and it’s marred here and there by misspellings and typos.)

Murray, now a Portland attorney, has sailed Serendipity far and wide over the past 50 years, and moors her off Cushing Island in Casco Bay.

David D. Platt is the former editor of The Working Waterfront. 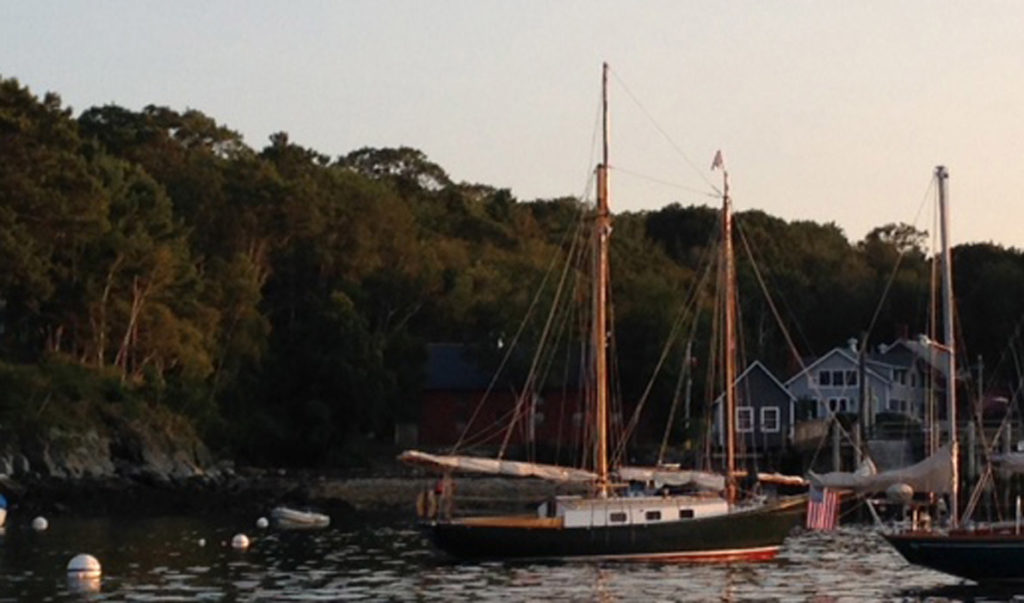 Serendipity at her mooring.