When Bertha was a mere teenager, she started working with Dr. North’s family in Montclair, N.J., mostly to help take care of the Norths’ five children. She stayed for the rest of her working life, taking on the work of cooking and serving. Married to Chester Turpin, she came to the North’s house daily excepting for the usual days off, uniformed, her hair in a net, and a crisp white apron tied around her tiny middle.

The Norths entertained quite a lot, and it was largely Bertha’s cooking that made it possible.

The oldest North daughter, Anna, learned quite a bit about cooking from Bertha, and eventually married, the only one of four sisters to do so, while younger brother Charlie also married to form a household of his own. Anna made her own home eventually in Connecticut after living at a series of Naval bases around the country as her Navy pilot husband Pete was transferred here and there. Anna was a very good home cook, still capable of making her own supper until she was about 104. Her three sisters continued to live at their childhood home, Bertha still in the kitchen.

I, myself, learned quite a lot about cooking from Anna, and have a clutch of recipes I use that I picked up from her over the 30-odd years of friendship. I even had the opportunity to visit the North kitchen in Montclair when diminutive Bertha still held sway, but was just a few years from retirement. I don’t remember my first encounter with the spoon, but it seems I have always known about it.

When Anna’s last remaining sister died, the Montclair house was sold and the contents shuffled off to various relatives and an auction house. Anna, already in her early 90s by then, collected a few items of personal significance to keep, including Bertha’s spoon. Whenever I visited with Anna over the past decade or so, I would see the spoon in one of her kitchen drawers, deeply touched by the wear on it from years of cooking.

I imagine Bertha coming to work in the morning and picking up the spoon to use and not setting it back down again until she was ready to go home. The spoon, which beat countless cakes, stirred thousands of puddings, pancakes, and sauces, mixed dressing into salads, stuffed turkeys, combined meatloaves, added milk to biscuits, made gravy and goodness knows whatever else, shows the wear of decades of constant use. When Anna died this past fall at age 106, I asked if I could take Bertha’s spoon as a memento of Anna, and my memories of cooking with her.

Bertha was right handed, and her spoon hit the side of bowls, pots and pans at a gentle slant for so long that it has a flat edge, which is curled slightly inward from constantly striking another surface, while the opposite edge is smooth. When held against the flat surface of a frying pan, say, it is apparent that the spoon could scrape up any little stuck-on bits and nearly serve as a spatula. Held in a bowl, tipped to ease beating, the spoon meets the bottom and side of the bowl almost perfectly. The top, leading edge reaches into the angle between the sides and bottom of a pan. Bertha turned the spoon into a perfect kitchen tool.

Bertha’s spoon has sent me into my own kitchen to see what, if anything, someone could learn about my cooking habits from the tools I have used for the 45 years or so that I have cooked. The knives show the greatest change—a small chef knife now has a notably narrower blade, and dear old Little Brown Knife is now razor thin with a sliver of a blade that I just know will one day snap off.

I use wooden spoons for stirring instead of metal ones, and all three of the favorites show the same flattening side that Bertha’s spoon has. A favorite three-tined fork I bought new has a wooden handle that has softened from a rectangular to oval shape. Nothing I own shows the relentlessly constant use that Bertha’s spoon shows.

Since the spoon belonged to the Norths and she left it behind there when she retired, I wonder how Bertha cooked at home in her own old age without her spoon, or did she have a spoon of her own that she used? Was the spoon that I now call Bertha’s so firmly associated in her mind with her work at the North’s house that to pick it up placed her firmly in work mode, as a favorite pen might inspire a writer, or a certain saw ease a carpenter into the day? Or was Bertha, in fact, glad to lay that spoon down and leave it behind her the last day of her lifelong employment? Maybe she didn’t even think about it as much as I have thought about it.

I probably won’t ever beat a cake with it, but I treasure Bertha’s spoon as one connection to a dedicated home cook. After all, when I hold Bertha’s spoon, I feel like I am holding her hand. 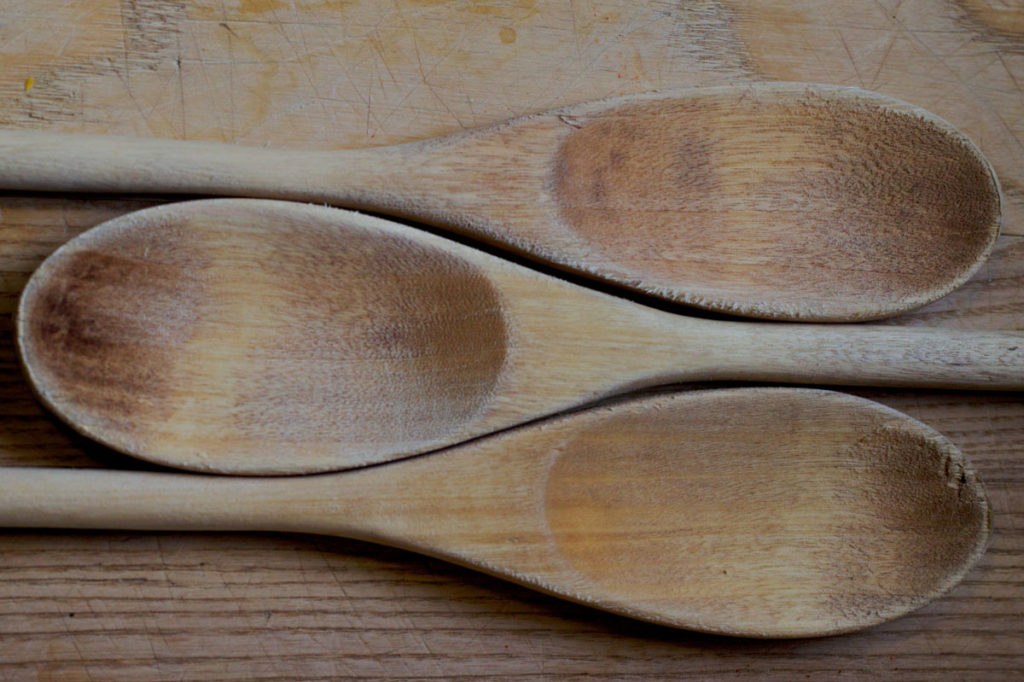