Maine’s wild blueberries started out 10,000 years ago as a scrappy survivor in the nutrient-deficient sandy plain left behind by receding glaciers.

Today, the wild blueberry is a signature Maine product. Growing naturally in fields and barrens that stretch along the Downeast coast, the blueberry is adapted to Maine’s naturally acidic, low-fertility soils and challenging winters, and require minimal management.

The barrens, in vibrant magentas and purples, are a stunning sight. The tasty product, smaller than cultivated blueberries found elsewhere around the world, is packed with flavor. Long known as a staple for jams and pancakes, blueberries in recent years have gained cachet for a growing suite of value-added products, from wine to chutney to skin cream.

The sweet success of Maine’s wild blueberry goes back to early Native American history, said Dr. David Yarborough, the wild blueberry specialist with the University of Maine’s Cooperative Extension and professor of horticulture in the School of Food and Agriculture. Native Americans used the tiny berries, both fresh and dried, for their flavor, nutrition, and healing qualities. They also were useful as meat preservatives, thanks to their naturally occurring antimicrobial compounds that inhibit bacterial growth. Blueberry growth was first encouraged by Native Americans by periodically burning over fields.

In the early 1800s, European colonizers gathered berries as a public privilege on the blueberry barrens of Washington County. Blueberries were canned and shipped to the Union troops during the Civil War in the 1860s. A century later, technology for “individually quick frozen” berries was developed, followed by computer color-sorting technology. In the late 1990s, the industry began promoting blueberries as “Nature’s Antioxidant SuperFruit,” according to information available through the cooperative extension.

On the production side, early commercial growers realized that blueberry yields were higher when the fields were burned every few years. Rocks were pulled and fields leveled to allow for mechanical mowers and harvesters. Berries today are grown on a two-year cycle: Each year, half of a grower’s land is managed to encourage vegetative growth and the other half is prepared for a wild blueberry harvest in August. After the harvest, the plants are pruned to the ground by mowing or burning, using straw or oil burners.

All of those inputs, Yarborough said, resulted in higher yields per acre, and therefore fewer acres in production. In the 1950s, 150,000 acres produced 10 million pounds of wild blueberries. In the 1970s, 60,000 acres produced 20 million pounds. According to a June release from the Concord, N.H.-based New England Field Office of the USDA’s National Agricultural Statistics Service, harvesting in 2016 took place on 23,100 acres, resulting in production of 101.84 million pounds, up 25 percent from production a decade ago, and up 10-fold from the 1950s.

“We’ve improved productivity by, instead of just burning and coming back in two years, controlling weeds and pests, we have fertilizers, we add supplemental bees for pollination, and some fields have irrigation systems,” said Yarborough. “So we’re able to produce blueberries at a lower price.”

Although production is high, Maine’s share of the international blueberry pie has fallen.

In the 1950s, said Yarborough, Maine was the largest producer of blueberries, both wild and cultivated, in the nation.

Wild blueberry production occurs in a geographically distinct area that includes Maine, the Maritime provinces, and Quebec province. The harvest begins the third or fourth week of July and runs through the second or third week of September, with peak production in August.

British Columbia is the largest producer of cultivated blueberries, at 170,000 million pounds, followed by California, Washington, and Oregon.

The success of Maine’s wild blueberry has resulted in challenges. According to the New England Field Office, Maine wild blueberry growers saw a decrease in value of the 2016 wild blueberry crop. The price growers received for processing berries in 2016 averaged 27 cents per pound, down 19 cents from 2015 and 33 cents lower than 2014. Overall, growers in 2016 earned $27.3 million, down 41 percent from the previous year and down 66 percent from a decade ago.

The increasing challenges the industry faces from global oversupply of cultivated berries and steeply declining prices prompted the USDA, earlier this summer, to approve up to $10 million to purchase surplus frozen Maine wild blueberries for distribution to food banks and other charitable institutions.

Production is likely to grow, thanks to an unexpected culprit—climate change.

“We already have seen changes,” said Yarborough. “We’ve seen Quebec production increase. They would have a frost every two to three years and production would crash. But it isn’t crashing anymore. Even though it’s still more erratic than Maine production, their production areas in  the north are improving and expanding. Even places in Maine, where the blueberry crop was not reliable because of frost, can now grow blueberries.”

Still, he said, climate change could pose challenges if it gets too hot for blueberries, or if it brings more pests and disease from southern areas.

“But at this point in time, we have a net advantage with the longer growing season.” 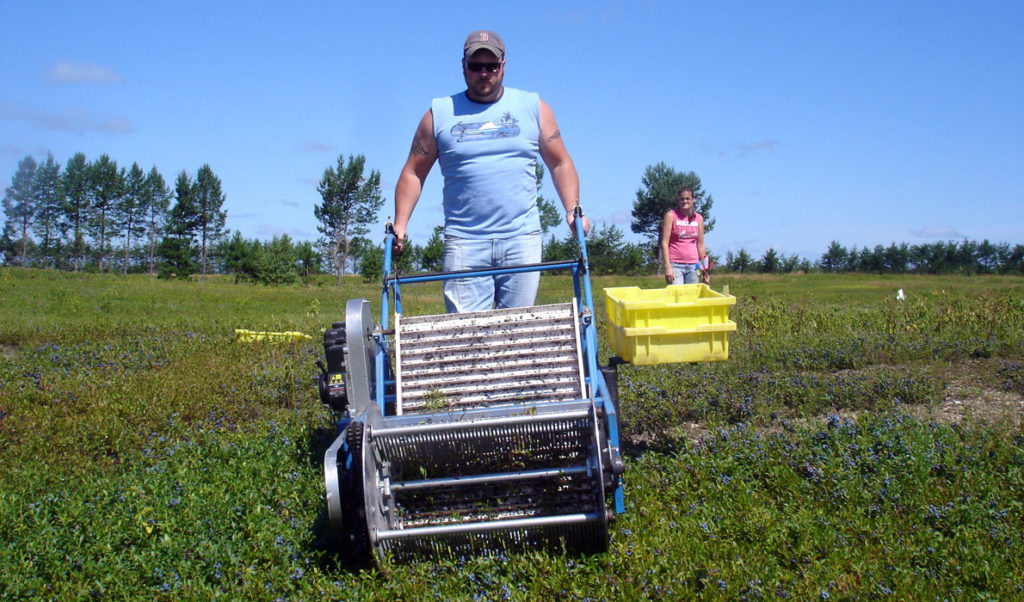