Schoodic Point and its acres of pristine shoreline and deep woodlands dodged a bullet more than a century ago when plans by John Godfrey Moore to develop the pristine property were derailed by his premature death.

Moore, the son of a Steuben sea captain, made his fortune in the telegraph industry and on Wall Street. He gained fame in 1893 by successfully suing the U.S. government to stop the new income tax, delaying its implementation by 20 years.

Among Moore’s investments once he achieved great wealth was assembling a more than 2,000-acre estate on the Schoodic Peninsula. His dream for the land included a luxury hotel, grand homes, and a summer resort equal to those in nearby Bar Harbor.

The coastal property offered panoramic views across Frenchman Bay to Cadillac Mountain and stunning sunsets from the vantage point of sea-swept Schoodic Point. Among Moore’s great pleasures was standing atop Schoodic Head, from where he could see his hometown to the east.

But those Gilded Age reveries ended when Moore died suddenly in1899 at the age of 51. His family did not share his vision for Schoodic Point. Visits to the area by his wife, Louise, and their children became less frequent.

In 1922, Louise spoke to George Dorr, credited as the father of Acadia National Park, about adding the Moore property to holdings on Mount Desert Island that had already been set aside as a national park.

In the late 1920s, the Schoodic property joined what would later be christened Acadia National Park and represented about five percent of the park’s total acreage.

The two distinct portions of Acadia National Park would become connected in other ways as well, with the relocation of the Otter Cliffs Radio Station.

Otter Cliffs was established on Mount Desert Island in 1917 as a strategic listening station for the U.S. Navy. It was considered among the best radio sites along the East Coast because of the lack of man-made noise within many miles and the unobstructed water between there and Europe.

Otter Cliffs could receive signals from Europe when no other station in the United States could. It had been invaluable in World War I when radio receivers were rather primitive. By 1930, the station also began to track weather reports from Iceland and Newfoundland, and emergency traffic from Europe, when atmospheric conditions were muddled.

Over the years, the deteriorating Navy buildings at Otter Cliffs became an eyesore. More importantly, Otter Cliffs was in the path of the Park Loop Road planned by John D. Rockefeller and other philanthropists.

The Navy told Rockefeller it would relocate the radio station if a suitable alternative could be found on the coast and within 50 miles of the existing site. 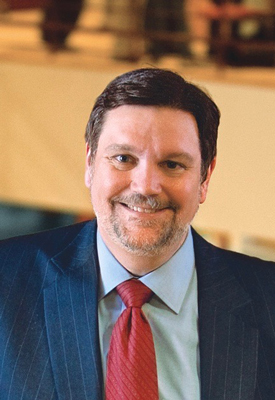 Big Moose Island at the tip of the Schoodic Peninsula and across the mouth of Frenchman Bay was determined to be that ideal location, and an agreement was reached between the Navy, the Interior Department, and Rockefeller.

Rockefeller retained Grosvenor Atterbury, the New York architect who designed Acadia’s gatehouses on Mount Desert, to design buildings at the new listening station in Winter Harbor that would be compatible with those Atterbury designed for the park on Mount Desert Island.

Atterbury’s plan included a stately hall similar to Rockefeller’s residence at Seal Harbor. That building, along with the adjacent power station, also designed by Atterbury, were listed on the National Register of Historic Places in 2013.

The Navy moved to Schoodic Point in 1935. Its eerie looking Wullenweber Antenna Array and Classic Wizard antennas, dubbed by locals as the “Elephant Cages” for their ring shape and tall antenna poles, worked with satellites to triangulate the location of foreign warships. This also enabled what was later known as Naval Security Group Activity to provide ships equipped with cruise missiles with a means of over-the-horizon targeting.

As the station expanded to meet the demands of World War II and the Cold War, the Navy base grew to 35 buildings and 350 Navy personnel.

By 2001, the Navy prepared to close the base with plans to turn the land back to the National Park Service. The Foc’sle Galley at the facility served its last meal on Sept. 28, 2001.

When the Navy officially closed the base in 2002, it was a major economic blow to the community, leaving vacant housing in town and dramatically reducing the school population.

A group of interested year-round and summer residents was formed to plan for the future of the property. What emerged from those discussions is what is known today as the Schoodic Institute at Acadia National Park. 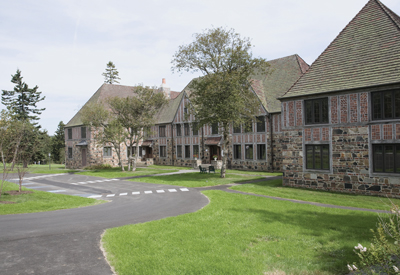 Students and citizen scientists join hands with seasoned researchers at Schoodic Point in examining environmental change, the human response, and how this affects the national parks, communities, and society as a whole.

The bird ecology program carries out year-round studies that enlist professional ornithologists, citizens, Acadia National Park visitors, and students of all ages. The forest ecology program focuses on understanding the dynamic natural world and developing effective stewardship responses to global change threats. In the same way, the marine ecology program recruits support from academics to students in understanding the mechanisms driving patterns of change in Acadia and the Gulf of Maine’s dynamic intertidal system.

“We want to do everything we can to learn about the ecology and environment and the many ways it is changing and to preserve and protect these natural wonders,” he said. “And we want to engage others in that learning. Importantly, we seek to excite young people about our natural world and the thrill of science.”

“We have a unique location within some of the most pristine parts of the park, extending from woodlands to shoreline and into the Gulf of Maine,” Elwood said. “We have a close, dynamic, mutually beneficial relationship with the park. We have a campus that is well suited to both doing great science and hosting groups of visitors from high school students and educators to scientists and research fellows, to park visitors and many more.”

Schoodic By the Numbers

2,266 —Acres on peninsula that are part of Acadia National Park

514 — The year-round population of Winter Harbor, the town that hosts the Schoodic portion of Acadia National Park

The challenge, he said, is to attract even more exceptional scientists while recognizing that the research must be circumscribed.

“We cannot do everything. We must focus on those ideas which take full advantage of our unique assets and add real value to the park and the world. And like most start-ups, we need to establish a stable and reliable economic model.”

Ellwood’s interest is personal as well as professional.

“I am fond of saying that my soul resides here,” he said. “Schoodic Institute offers an amazing opportunity to learn so very much about this amazing natural wonder, but equally important to be at the forefront of introducing the insights of what is happening here to new generations. And in learning and sharing, we have the chance and the responsibility to see what we can do to be effective stewards of this wonderful place.”

Jacqueline Weaver is a former reporter for the Reuters news service and the Ellsworth American. She lives in Winter Harbor. 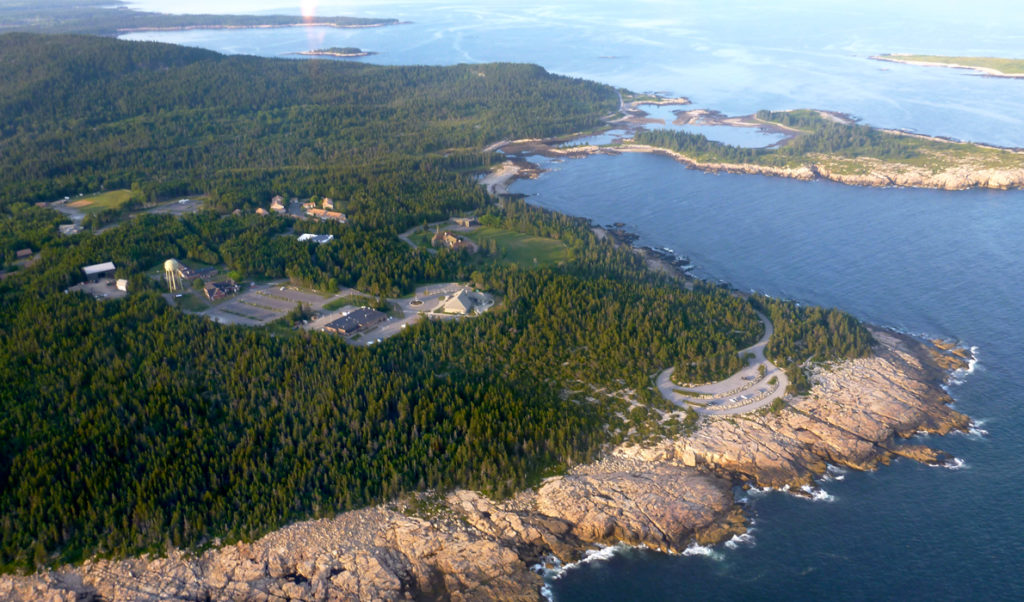 An aerial view of the tip of Schoodic Peninsula.