The Cranberry Isles get a ton of visitors in July and August. And why not? The islands are a beautiful place to wander and wonder about. It is not unusual to be asked, “Do you live here year round?” Most of the time a positive response is followed by the question, “What’s it like in the winter?” My answer is usually, “Very quiet and very beautiful. Though it can get stormy, and sometimes boats are canceled because it’s just too dangerous to go across.”

Living amidst possible danger in a beautiful setting sounds like we live in the middle of a fascinating novel, doesn’t it? I feel like that. After living here year-round for 39 years, there are still times I pinch myself to make sure it’s not a dream, but the operative word is “living.” Not visiting, not vacationing, but day-to-day “living.”

Crossing the water to come and go is an accepted part of island living, but the aspects of the challenge change with the seasons. I’m curious why tourists never ask what it’s like being a year-round resident in the summer when island populations quadruple, the mailboat is full to capacity, and there is so much more traffic on Mount Desert Island.

Like winter travel to the mainland, there are preparations to be made before going off-island in the summer. As islanders walk from the boat to the parking lot in Northeast Harbor, they are carrying coolers rather than snow shovels. Delay caused by the time it takes to chip ice and clear snow from one’s windshield is replaced by the delay that springs from driving in circles in Bar Harbor to find a parking spot at Hannaford’s.

Many of us have our iPads or laptops with us for a stop in the library when island Internet speeds are slowed by the increase in users. As I left the island on a Monday morning, my neighbor Cindy was on the boat. She said she had just been off on Friday, but that she needed to go back off island to pick up her new eyeglasses. Apparently, the optometrist had called her on Friday to say they were ready, but she didn’t get the message until she was back home on the island.

Neither of us gets a cell signal at our house, meaning we don’t tend to leave a cell number at a doctor’s office because if they called us on the cell at home we wouldn’t know it. So, here she was going off again, on a boat filled to capacity to pick up her glasses and do some other errands.

She was about as excited about it as I was heading off to an appointment in Bar Harbor.

During the summer, island residents want to get to the dock earlier than usual for the 10 a.m., noon, or 2 p.m. boats, because there are often more passengers than the ferry will hold. Fifteen minutes before leaving, the captain usually allows the island residents to board first, before the day visitors. (Just don’t show up five minutes before departure and expect someone to get off to let you on. It puts the captain and crew in an awkward position and it’s bad manners.)

The need to get to the boat early adds stress to a day of fitting in as many off-island errands as possible. We don’t want to have to go off island again any time soon.

So, why aren’t we ever asked what it’s like to “live” here in the summer? Probably because the visitors and vacationers see what our summer-weary eyes have forgotten to notice in the midst of our August agitation and angst:

Take a deep breath, fellow islanders. The month of August flies by, and a little crowding in our favorite spot is a small price to pay for ten months of quiet beauty. 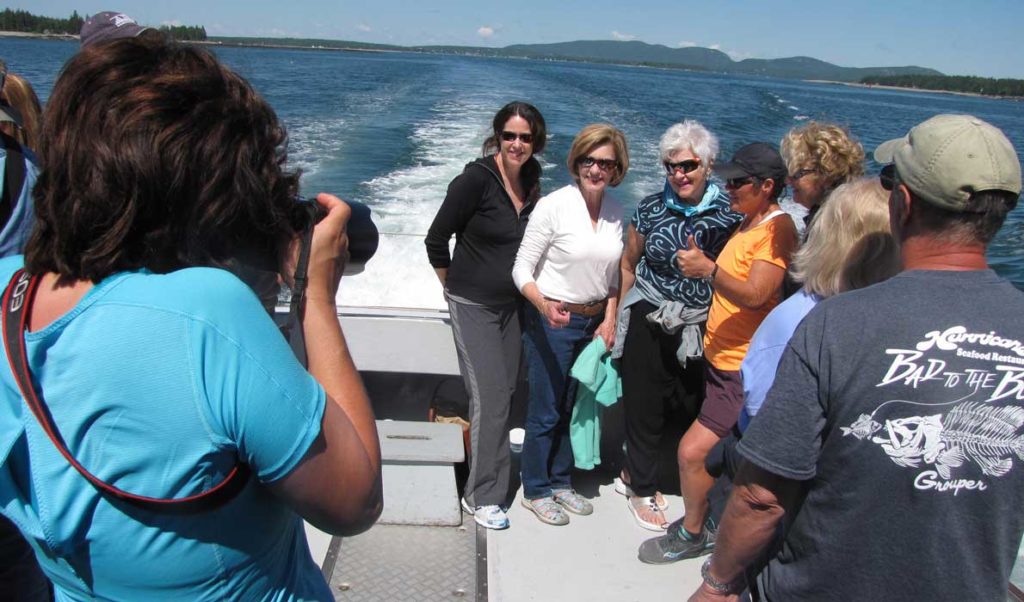 The boats to and from the Cranberry Isles are crowded in summer.