Four years ago, having just moved to my new home in Lubec, I went to work immediately on a vision I had nurtured for some time: Let’s stage a marathon here.

Not just a modest marathon. An international marathon that would be spectacular. One that connects the adjoining communities of Lubec and Campobello Island, New Brunswick. A marathon with two countries, one bridge, one border and four lighthouses.

Working with a committee that eventually had as many as 18 around the table, what resulted in June 2013 was the first Bay of Fundy International Marathon. We drew 500 runners for that first marathon, plus another 300 runners in a same-morning 10K. They came from 36 states and six Canadian provinces.

The fourth running of the marathon took place on June 26. It has become (nearly) everything it was intended to be. I say this proudly, although I also say this from a distance. I stepped away from the committee after the first year, served as an honorary co-chairwoman for the second year, wasn’t even in town on marathon weekend for the third year, and showed up on the morning, camera in hand, as a mere spectator for the fourth year.

The marathon presents the perfect mix of the best of both places. It starts and finishes in Lubec, but most of the miles unfold on Campobello. It’s easy on the eyes, with runners passing vistas of bays and fields of lupines. They report sightings of eagles and whales. But it’s not so easy on the legs, because the 20 miles (up-and-back) on Campobello are little else but undulating hills.

Getting to Campobello, and back, represents what became the marathon’s original challenge: How do you move 500 runners (or slightly fewer, in recent years) through the international border, twice?

Race director John Hough, who has been in charge of race logistics since 2013, set the plan in place after multiple meetings with border authorities from both the United States and Canada. Those meetings are renewed every year.

Registration cuts off one month in advance of the race, allowing border agents on both sides to approve passports. Come race day, marathon runners pass through without slowing at all: Their bib numbers contain high-tech chips that send electronic signals. Their bibs actually serve as their border-crossing documents on the day.

Now firmly set on the last weekend each June, the marathon brings an annual abundance of goodwill and good economics to the area. The most obvious measurement is that beds from Machias to Eastport to Calais, and across all of Campobello, are all full for two or three nights around the race. Eight hundred runners and their supporting family members do that. They also fill restaurants, buy souvenirs and spend on gas.

The race itself isn’t a money-spinner. The budget comes largely through runner registration fees and a handful of local sponsors. Most of the budget ends up back in the hands of community groups. About $2,000 is raised directly by runners for the race’s “charity of choice,” which alternates between Campobello and Lubec nonprofits each year.

There is no bling in this marathon. It is homespun, and likely always will feel that way. For getting the work done, as many as 300 volunteers from both communities come forward on the weekend. For awards, a Lubec artist has crafted pottery with themes of herrings, right whales and harbor seals. For the medals that go to all marathon finishers, an Eastport artist has casted medallions of scallops, sea urchins and starfish native to Passamaquoddy Bay waters.

The marathon features more than its share of quaint qualities, but it’s not missing out on any national running trends. A half-marathon distance—America’s most popular race distance—was added in 2015. Runners continue to come from more than 35 states and several provinces: Such a field reflects well on the 4,000-member 50-States club, for those intent on running marathons in all 50 states.

If they have to run a marathon in Maine, they may as well head for the Bay of Fundy. After all, it is probably the world’s only marathon that, for the pre-race dinner, serves lobster alongside pasta.

This marathon is international and Downeast all at once. For me, as its founder, it’s a pleasure to see both the exceptional experience for runners from afar, and also the tremendous exposure for our local places.

Katherine Cassidy, who lives in Lubec, has traveled to write about marathons in 43 countries. 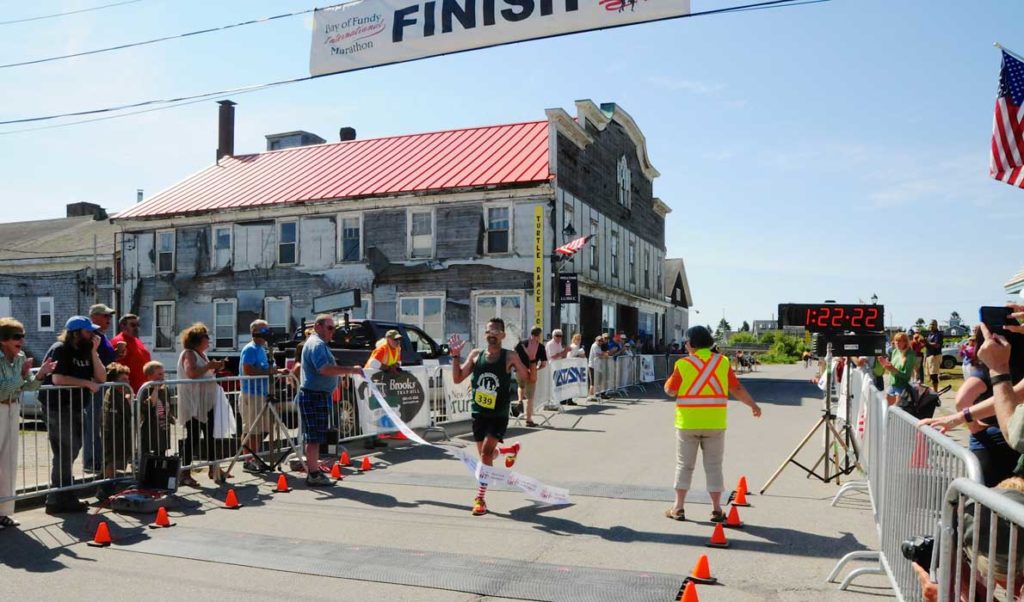 A runner crosses the finish line in Lubec.