The ocean is a place for the senses. Living in the city, amidst the frenzy and the noise, the operative function is contra-sensual, a mix of cacophony and nonsense. We are blinded by the lights, insensitized by the feel of the urban space, and deafened by the chaotic mix. We long for the ocean and move there and vacation there in pursuit of freedom.

There is a massive internal migration in the United States from the heartland to the coast. By mid-century, more than half the population will have moved to the edges, mostly into the density of large urban and suburban regions in search of work and social engagement.

We will be running out of shoreline—assumed by wealthy estates, water-dependent and marine-related industries, vestigial public spaces like parks and beaches, and remnants of coastal wetlands that have been protected from the constant pressure of development. There is a terrible irony in the statement that the ocean is the last great wilderness when in fact its access is becoming more and more limited by human settlement, its value compromised by intensity of use.

The wheel turns, as the American heartland, once wild, then civilized by the business of agriculture and fossil fuels, is now slowly abandoning to the wild as inhabitants move elsewhere.

And then there is the ever-perplexing implication of climate change, extreme weather, and sea level rise that will impact coasts and coastal communities exponentially in ways already demonstrated by recent hurricanes, floods, resultant erosion, and eutrophication of inshore waters.

What, senselessly, will be lost? Here are some things at risk:

Vision
Sight and insight, clarity and purity in a changing palette of colors, all spectral possibilities, from light to dark, from deepest blue, to purest white, to furious black as the front rolls through. Depth and dimension: the two-dimensional frame of the ocean view; the three-dimensional depth to beyond the horizon and into the sky and space where there is no limiting shore; the four-dimensional extension of time as history of human achievement connecting from the beginning across the open sea.

Audition
Hearing the sound of resonance, the rolling mellifluous rhythm of waves, relentless, changing, rising and falling, reverberating, mixed with the incomparable overlay of wind. Calls and cries of sea birds. Grating of pebbles and shells on the beach. Fine choral harmonies of blowing sand and sea grasses. The poetry of the wind reciting expressive lyrics of solace, lament, fury, and joy.

Gustation
The tastes of water and salt, bits of grit and seaweed, of beach fare—chips and vinegar and sandy sandwiches, hot dogs grilled, sharp mustard, clams and mussels steamed, lobster with so much drawn butter, sweet corn, of shared plates at a family picnic, of maybe a kiss—each a stimulus for association and times passed, the tastes of youth and age, of memories.

Olfaction
The smell of wind, changing with direction, off-shore, in-shore, around the compass, riding in and away to places somewhere else beyond our knowledge, the smell of rain and fog, driftwood fire smoke, sweat and sunscreen, of the past mixed into the present and into intimations of the future.

Sensation
The touch of your companion’s hands, your children’s embrace, the sun on your skin, the water when you first enter, the cold rising, the decision to slowly immerse or dive right in, the salt in your eyes, the swallowed sea unwelcome in your lungs, the feel of some strange marine creature crawling, swimming by.

Creation
Our voices. The shape of speech inherent in our thoughts as we ponder self, selfishness, selflessness, the confessions between us, the laughter of playing children, the shouts of exhilaration and defiance, the words of friendship and love, the words we don’t have the courage to speak.

All these things aggregate into movement—a dynamic as temporal as swimming away or dancing on the beach, as psychological as personal inquiry, awareness, and analysis—a search for equilibrium and location in time and space.

The ocean is the best therapy, the most powerful place for expression of the human spirit and connection, the source of who we are, thus what we do, thus meaning. We are grateful.

Peter Neill is director of the World Ocean Observatory, which produces weekly radio essays heard on WERU-FM, 89.9, on podcast at apple.com/us/podcast/world-ocean-radio/id425361249, and at http://www.worldoceanobservatory.org/world-ocean-radio. He lives in Sedgwick. 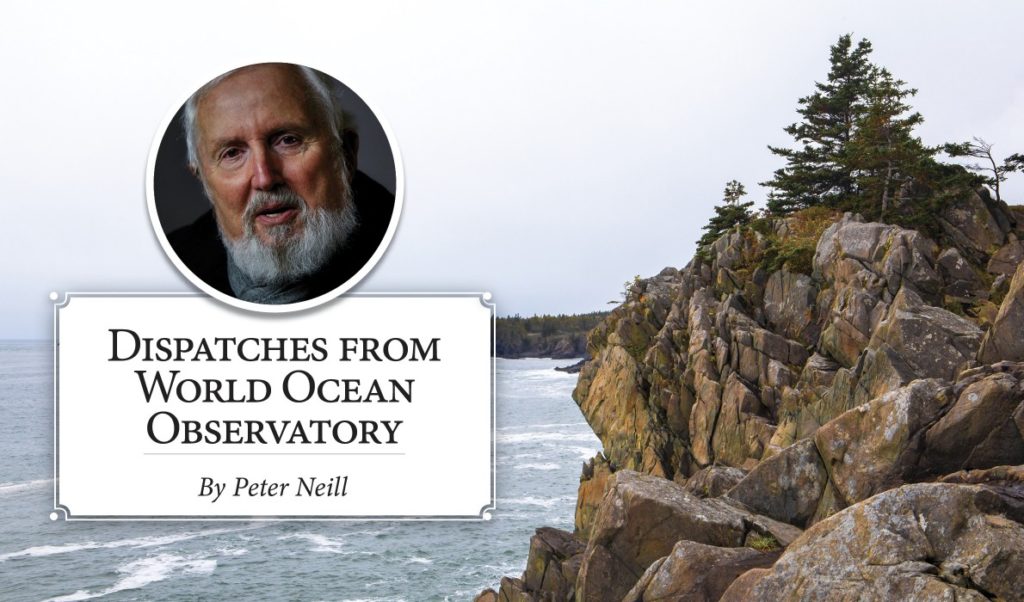