Tourists in the Known World: New and Selected Poems

The ocean is unsayable, like a lot of the natural world. The night sky is unsayable. The energy in a seed. The sacrality of a maple leaf. The full moon. The mind of snow. The inter-complications of beauty and death.

It turns out some poets’ aim at these unhittable targets is truer than others, and Kristen Lindquist is among the former. In between her former job at the Coastal Mountains Land Trust and present board membership at the Merryspring Nature Center in her hometown Camden, and frequent excursions as a well-known birder and birding guide in Maine, Lindquist has spent many years having meticulous, deeply considered runs at saying what cannot be said about the natural world and our place in it. The result has been really edifying, encouraging and sometimes chilling poetry, among the most evocative being written in Maine here in the early 21st century.

Her new collection, Tourists in the Known World: New and Selected Poems, is a trip through much of the best of her poetry written over the past roughly 20 years, and is a mix of straight-up nature writing along with polished insights into the nature of our peculiar connections to the world and each other.

In these poems, the natural world is ever-present, and sacred. “Angels around me, o ospreys, I pray/for those white wings catching light/above waves and sails,” opens “Invocation to the Birds” early in the book. The sense of nature’s sacrality emerges time and again throughout, in animals, bodies of water, places, and mountains; “On South Branch Pond, Baxter State Park” begins:

I say it’s because they create their own weather, so we can only

imagine what’s going on up there under the veils of clouds.

The poem then runs through a rich description of mountain flora and fauna, a night and morning on the trail, and finally the hikers “lay across stream-washed ledges/and let the icy water flow over our bared flesh, every atom/in our bodies ionized by the spray, charged, waiting/for the mountain’s green hand to reach down and lift us up.” The natural world interlocks with its human participants in virtually unsayable ways. This  homes as close as it gets in poetry.

In “November 6,” the speaker of the poem is simply sitting at a picnic table waiting for Paul to bring cheeseburgers from the take-out stand, when the beauty of late autumn overtakes her: “My gloved hands clasp my bottled water./My joy feels something like prayer.”

Especially in her later poems, the voice in many takes on a less formally ruminative air and becomes more speech-like, casual and chatty, yet simultaneously more emotionally penetrating. “Apocalypse” is a funny but really quite dark narrative on a fantasy of the end of the world at the gym. When the speaker of the poem, trundling along on her treadmill, notices the TV screen overhead has gone blank, she jokes that “maybe the rest of the world had just blown up.”

A man doing arm curls laughed aloud at the idea

that of all places our little town in Maine would be spared,

but why not? We’re the hand at the end of the country’s

Canada. Surely no one would bother bombing us.

The lightheartedness of this seemingly throwaway moment is different from the reverent atmosphere of the pure nature poems, but its irony and humor are in some ways closer to the surface we tend to live on. The speaker goes on to plumb the sensibility: “I kept running on the treadmill, because, after all,/you want to be in good shape for the apocalypse.” We take a little trip around the gym of gossiping women, a “bulked-up guy” doing curls, a skinny teenager in a tight T-shirt, and soon the routineness of it all pushes her thoughts “away from end times,” and we’re left with a plain-spoken contrast between the comfortable everyday and the all too real understanding that wholesale death’s distance is, maybe, probably, less a laughable irony and more an illusion: “How quickly thoughts turn away from end times/when there’s the question of what to make for dinner.”

We are, nonetheless, exactly where we are, and even though this apparently tranquil domesticity has an edge we all eventually tip over, it is extraordinarily beautiful in itself.

“On the Island” is a song on the acute, practically unsayable pleasure of summer vacation; “not an escape but a return,” to jump in the ocean, stay up too late reading, collect periwinkles and beach stones, eat too much, and ultimately “think only of birdsong, and tides, their ebb and flow.”

The niches and blazes of the interrelationships between nature and human are expressed in these poems about as accurately as it’s possible to say, if you ask me. This is gorgeous, deep-well poetry.

Lindquist’s poems have appeared widely in literary and local Maine publications, and have been read on National Public Radio’s Writers Almanac. She writes a monthly nature column for the Penobscot Bay Pilot website and keeps a blog, “Book of Days: A poet and naturalist tries to find poetry in every day.” Her website is at www.kristenlindquist.com.

Dana Wilde lives in Troy and writes the Backyard Naturalist and Off Radar columns for the centralmaine.com newspapers. His recent book is “Summer to Fall: Notes and Numina in the Maine Woods,” available from North Country Press. 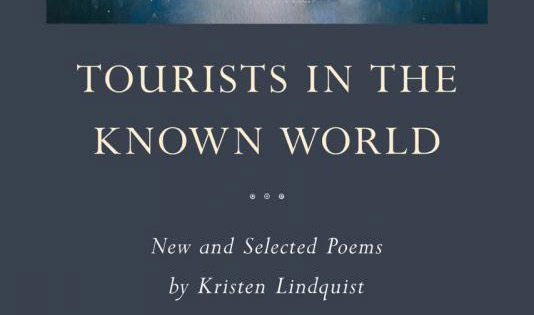