Located literally halfway between Cape Elizabeth and Cape Small, Halfway Rock not only marks Casco Bay’s midpoint, but also its outer limits. When you hear mariners say they are going fishing “outside,” you know they are headed out beyond “the Rock.”

On July 26, as part of the Chebeague Island Historical Society’s Ellsworth Miller Memorial Lecture Series, Ford Reiche captivated more than 70 islanders with the story of saving the 150-year-old Casco Bay landmark that is Halfway Rock, including the daunting tasks of buying, restoring, and documenting the work.

Since childhood I have been fascinated with Halfway Rock. I could see the flash of the light from my grandmother’s porch and was often lulled to sleep by the sound of its foghorn. While eating lunch on my father’s lobster boat, he shared stories that he had heard from some of “the old people,” Chebeaguers who worked on the initial construction of the lighthouse.

Back in the 1990s, I was pleased to learn that Peter Ralston, Sen. Olympia Snowe, and others created a path to save Maine’s endangered lights from crumbling into the sea. Certain lighthouses, including Halfway Rock, were offered to nonprofits for free. Six nonprofits looked at Halfway Rock, and they all reached the same conclusion—it was an impossible task.

Cliff Islander Roger Berle and I had a brief conversation about trying to combine community resources to take on the project, but we quickly gave up the idea.

A project like this needed a champion who had knowledge, skill, resources, perseverance, and most important, passion for a project that so many had said couldn’t be done. Those of us who hold Halfway Rock dear are thrilled that someone with that passion and can-do spirit stepped forward—Ford Reiche.

Reiche grew up around Casco Bay, and his resumé is rich. He has a law degree and has enjoyed a distinguished business career. He also has served on several non-profit boards. While all of this was helpful, nothing prepared him for the challenges that he faced restoring the lighthouse.

An engaging and energetic speaker, Reiche knows his subject. His research is meticulous and expansive, and accessed 26,000 pages of material in the National Archives along with a collection of maps going back to the 1600s and scores of historic photographs.

Reiche and his father had checked out Halfway Rock in 2013 and were concerned that it could have been dismantled or become a cell tower. The lighthouse has been unstaffed since 1975, was named to the Register of Historic Places in the 1980s, but it had also been identified as one of Maine’s most endangered structures.

The interior had been stripped, windows were missing, and the granite tower was crumbling. Ford called his cousin, Earle Shettleworth, who at the time was the Maine State Historian as well as the head of the Maine Historic Preservation Commission, the agency that oversees buildings on the National Register.

Somehow Reiche, who had created the nonprofit Presumpscot Foundation a few years earlier, had missed the news that the federal government was giving away lighthouses. By the time he spoke to Shettleworth, the opportunity had expired. He learned that Halfway Rock was on a list of surplus property and would soon go on the auction block to the highest bidder.

The auction’s starting bid was $5,000. Initially six bidders registered but by the time the bidding ended—99 days later—it was down to two, Reiche and a billionaire. Ford later wrote that he continued the effort because “I had in my mind that the lighthouse needed me, that I was the only bidder who had pure intentions to act in its best interests.”

The other bidder purchased Boon Island in York County and abandoned his effort to buy Halfway Rock. On Sept. 4, 2014, Reiche “won” Halfway Rock with a bid of $283,000, the most anyone ever paid for a Maine lighthouse.

But that was just the beginning of the challenges, which included discovering a deed error made in 1871, which took an act of the Maine Legislature to resolve. The logistics of transporting and erecting staging around the lighthouse to reset and repair crumbling granite blocks was daunting, the interior had to be restored to a historic period, and the boat ramps had to be rebuilt.

While Reiche was overcoming obstacles on Halfway Rock, he was writing its history and chronicling the process of acquiring and preserving the lighthouse. Halfway Rock Light Station is a well researched, beautifully written account of a lighthouse and a man’s commitment to restore it. It is available on Amazon for $30. 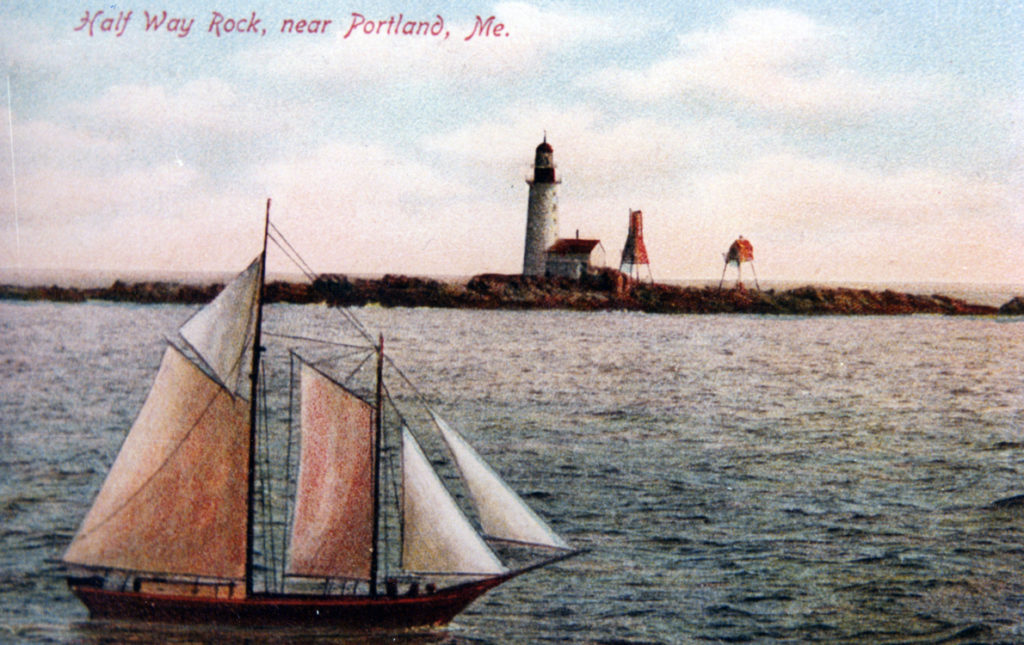