An 18-wheel tractor trailer truck is parked near Rockland’s fish pier on a hot day in late June. In the trailer, a couple of men are sliding empty plastic lobster crates toward the back door, where a fork lift operator waits to lift and set them down on the side of the road.

Another 18-wheeler parks nearby. A few other men begin to slide crates full of lobster from the refrigerated trailer to the rear, and the fork lift sets them on the roadside.

The lobster were caught by Vinalhaven fishermen, sold to the “smack boats” that travel to the island from the mainland, then hauled back to Rockland. Some are going one direction, some another, and so they are being repacked.

This is the lobster market in action.

Emily Lane, who handles marketing for the Vinalhaven Fisherman’s Coop and also international sales for Calendar Islands Maine Lobster, says a lobster caught in Penobscot Bay is going to meet a lot of people in the next few days.

“This lobster gets handled at least five or six times, from the time you catch it to the time it sits on someone’s plate for $50.” And at each stop, there are risks.

“People talk about the lobster market like it’s one market,” says Annie Tselikis, marketing director for Maine Coast Co., a firm based in York, and part-time director of the Maine Lobster Dealers Association. “It is a very complex and nuanced process,” she says of the decision-making matrix.

In fact, the market looks like a map of the Boston T system.

Once caught, things get complicated for lobster, as they travel to restaurants near and far and to processing plants. When that lobster caught off Vinalhaven finally ends up on that $50 plate, as either a live-cooked meal or in heated-up frozen parts, it will have passed through many hands.

“I always tell people, ‘This industry is inefficient by design,’” Tselikis says. The inefficiency comes with the diverse options—processed fresh, processed frozen, shipped by truck, by airplane, sold live, and on and on. Those options provide a broader, deeper market, which benefits fishermen.

As you read this in July, some 80 percent of the catch has recently molted—what used to be called soft-shell, but has been rebranded as “new shell” and touted for its sweet meat by the Maine Lobster Marketing Collaborative. Some new shell doesn’t survive shipping live well, Tselikis says. That meat will end up at processing plants.

Here are scenarios Tselikis offers for lobsters caught by an islander:
“Joe Fisherman sells his lobsters,” maybe a couple thousand pounds, “to Wharf A,” in a community where there is more than one buyer. The lobster is stored in floating crates overnight, then graded as new shell, hard shell and selects. The crates are then trucked, via ferry, to the mainland, where they are stored in tanks.

“Lobsters always need to get a drink along the way,” Tselikis explains. Concrete tank facilities, capable of holding 50,000 to 100,000 pounds of lobster in refrigerated water, are part of the industry “which nobody sees,” employing as many as 50 people in season.

“There’s a ton of infrastructure in the industry that you’ll never see,” she adds.

Company A’s lobster may go to Maine Shellfish, a distributor with offices in Ellsworth and Kennebunk, or to Harbor Fish Market in Portland, or directly to retail outlets, to Canada—where it may be sold live to restaurants there or processed—or exported to Europe, Asia or states outside of New England. The export market is reached by air transportation.

“The vast majority of lobster, at some point, gets on a plane,” Tselikis says. “You can’t truck it to California.”

The international and outside New England markets mean the product is converted from “crate freight to box freight.” Live lobster is kept chilled with frozen gel packs, and packed with wet newspaper or seaweed.

“There’s a lot of work required to be able to do this,” she says of shipping by air. “It’s not just the waving of a magic wand.” TSA approval must be sought for much of the handling and packing.

And lobster is, of course, a very perishable product.

“The second a lobster leaves the water, the clock starts ticking,” with a 48-hour count-down.

If the lobster that had been crawling on ocean bottom off Vinalhaven is shipped to Europe, it might land in Spain or Portugal, Tselikis says, and be quickly plopped into a tank, “because they need to get another drink of water.” From there, the lobster might go to a grocery chain, a fish market or a restaurant.

If our representative lobster ends up in a processing plant, there also are several paths for it to follow. There is high-pressure processing which pasteurizes the meat to preserve it and ensure easy access for diners. It can be cooked and picked, then frozen.

“Sometimes, tails are frozen raw,” but there also is a regional market for fresh tails, Tselikis says. And there is a market for frozen or fresh claw or knuckle.

And of course, there are value-added processors, companies that manufacture frozen lobster ravioli and other such foods.

Ironically, the glut of lobster landed in Maine in 2012 which cursed fishermen with historically low prices has helped grow the market for processed meat. That lobster had to go somewhere, and much of it ended up being processed and frozen, which whet appetites in new places.

Lane, who has been in the seafood marketing business for almost 25 years, says Calendar Islands has partnerships with four different processing companies in Maine.

And some of the state’s lobster ends up in Asia. Lane says South Korea and China are key markets. In fact, during our phone conversation for this story, Lane has to take another call from a “Tony from China,” who is looking for Jonah crab, and frozen and whole raw lobster. The Asian market is large but competitive.

“They’ll negotiate right up until you send the order,” she said.

It’s no wonder that explaining the lobster market isn’t easy.

“It’s taking a very expensive item and selling it in a commodity market,” says Lane. “It’s a luxury item that gets traded like sugar and flour.”

But at the end of the chain, lobster is a food, unlike sugar and flour, that diners connect with intimately.

“You have to put it in the pot yourself,” Tselikis says. “You have to tear it apart yourself.” That relationship between customer and product confers value to the lobster, and triggers expectations from consumers about harvesting practices and the health of the animal, which the industry believes play to Maine’s strengths. 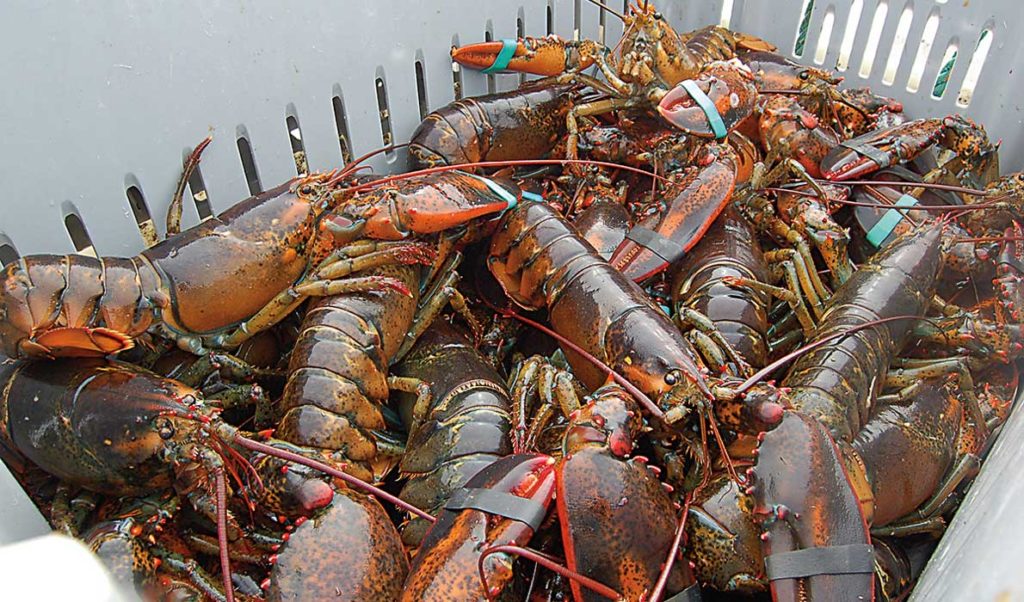