When it comes to the working waterfront, there always seems to be someone with a big idea that doesn’t quite fit with existing ordinances and practices. Recently, a pair of hotel proposals had residents of Boothbay Harbor and Portland wrestling with the endless challenge of trying to balance the interests of those who needto be on the waterfront with those who just want to be.

In Boothbay Harbor, what Paul Coulombe—who insists he is a philanthropist, not a developer—wanted was for the town to relax its maritime/water-dependent district zoning on the east side of the harbor so that he could renovate and expand a hotel there. The marine district, which runs down Atlantic Avenue from the footbridge across the harbor to the Carousel Marina, is already a de facto mixed-use zone lined with hotels, motels, and restaurants that co-exist with a handful of piers serving some of the Boothbay region’s 100 or so fishing boats.

A Lewiston native, Coulombe sold his family’s White Rock Distilleries line of Pinnacle Vodka in 2012 for $605 million. Since then he has built a $30 million mansion for himself in nearby Southport and has spent close to $100 million purchasing dozens of properties around Boothbay Harbor in a personal quest to turn the town into a swanky resort.

When folks along the Maine coast perceive threats to the state’s marine industries, they most often take their cases to local and state regulators and then to the courts. In Boothbay Harbor, however, people concerned about protecting the east side working waterfront from tourism are resorting to the power of purchase.

“As an organization, we believe that the only way to preserve and protect working waterfront is to own it,” said Deanne Tibbetts, a schoolteacher and lobsterman’s wife who helped organize the Boothbay Region Maritime Foundation, “and that is where we have put all of our efforts.”

The town already owns Fish Pier. Last year, in response to Coulombe, the Boothbay Region Maritime Foundation found donors to purchase Sea Pier from local lobsterman Douglas Carter. The buyers have pledged to sign the property over to the foundation and Carter agreed to reduce the asking price for the pier, which serves some 30 fishermen, in exchange for a deed restriction mandating Sea Pier remain in marine use.

Another group calling itself Friends of the Harbor has entered into a purchase and sales agreement on Cap’n Fish’s Motel in order to protect working waterfront and increase public access.

Boothbay Harbor’s marine district was created in 1987, the same year Portland passed a five-year ban on non-marine development, a move that stifled all development along the waterfront. Boothbay Harbor now finds itself where Portland was in 1992 when that city began relaxing its waterfront zoning.

On Jan. 9, the Boothbay Harbor planning board voted unanimously to forward to the select board an east side rezoning plan that would keep 23 percent of the marine use district as is and allow limited commercial development in the other 77 percent. A letter signed by 65 local business owners supported the rezoning scheme.

“Boothbay Harbor has to decide,” said Deanne Tibbetts, “whether it wants to be identified as an upscale resort community or be identified by its maritime heritage and culture.”

There are condominiums, restaurants, retail shops, and offices all along Portland’s working waterfront, which consists of about a dozen wharfs on the south side of Commercial Street, but there are no hotels. A proposal by local developer David Bateman to build a four-story, 96-room hotel with parking garage and office building had folks in Portland once again concerned about fishermen being pushed off the waterfront. Bateman previously redeveloped the Fort McKinley artillery base on Great Diamond Island as an island resort.

Bateman’s hotel, along with several other major projects—redevelopment of the 10-acre Portland Company industrial complex for retail, residential, and restaurant space and a hotel, construction of the new headquarters building for pay management company Wex across from the Ocean Gateway Pier, and development of the Rufus Deering Lumber Yard as a hotel-office-residential complex to be called Hobson’s Landing—led fishermen late last year to circulate a petition seeking a new referendum on waterfront development. In response to the threat of a referendum, the city council enacted a six-month moratorium while it studies its waterfront zoning.

“We wrote rules in the depth of a depression,” explained Portland’s waterfront coordinator Bill Needelman. “We are now well into a historic development boom. This is a good time to re-evaluate them.”

Commercial Street was built over old piers and filled land in the 1850s to accommodate the railroad. Motorists had to dodge trains for most of the 20thcentury as the tracks were only dug up in 1988. That was just one year after Portland voters passed the five-year moratorium on non-marine development on the waterfront by a margin of 2-to-1.

The proximate reason for the 1987 moratorium was the construction of Chandler’s Wharf condominiums by developer Michael Liberty. Nobody was happy about condos on the waterfront except for the people who built them and the people who bought them. The moratorium put the kibosh on Liberty’s plan to build a hotel on the docks as well.

Ironically, condos and hotels were exactly what was envisioned in 1981 by the American City Corporation, a planning firm the city of Portland hired to help redevelop its waterfront. City officials endorsed the idea until city residents rejected it.

The 1987 moratorium referendum succeeded in stopping non-marine development along Portland’s waterfront, but it also created what has been called “zoning-imposed market failure.” Wharf owners found there were not enough marine uses to fill vacancies along the waterfront.

When the moratorium ended in 1992, Portland began a series of zoning revisions designed to balance marine and non-marine uses. At first the city allowed some non-marine use within 35 feet of Commercial Street, but in 2010 a major waterfront zoning change expanded the allowable non-marine use to 150 feet. Under the new rules, 45 percent of ground floors on wharfs can be devoted to non-marine uses as long as the vacancy is advertised first for marine use. Any new construction requires that 5 percent of project costs be devoted to maintaining the marine infrastructure.

Even though zoning restrictions have been relaxed, residential development on Portland piers is still prohibited. The door has been left open a crack, however, to hotels, if approved by the city council as a contract zone. There is a slew of new hotels in Portland’s Old Port and on the landward (north) side of Commercial Street, but so far no one has managed to build one on a wharf.

In 2009, local developer Eric Cianchette, who had previously transformed a National Guard armory in the Old Port into the Portland Regency Hotel, proposed a hotel on Maine Wharf, but he ultimately gave up in frustration when he was unable to get the project permitted.

David Bateman’s proposal to build a hotel-office-retail-parking garage complex in front of the Chandler’s Wharf condominium complex was just the latest hotel scheme to knock on the Portland zoning door.

Fishermen were not having it.

“Mr. Bateman’s hotel is far too large a non-marine project to be that close to a working wharf,” said lobsterman Keith Lane. “Just the amount of people involved invites conflict.”

Lane helped organize the referendum petition drive that led Portland to declare the new waterfront moratorium. He has been lobstering since 1960, but after close to 60 years on the water he is in danger of becoming the last fisherman in Portland. Of the 80 to 85 lobstermen who work out of Portland Harbor, Lane is one of the very few—perhaps 10 percent—who actually live in the city.

FINDING A BALANCE ON UNION WHARF

“How does Maine choose industry over gentrification? And does it want to?” asked Monique Coombs, seafood program director of the Maine Coast Fishermen’s Association. “That’s a scary question.”

As municipal officials, residents, property owners, and fishermen in Boothbay Harbor, Portland, and elsewhere along the coast seek to accommodate both water-dependent and water-desired uses, Coombs suggested Portland’s Union Wharf as “a model of what all the wharfs could do.” Keith Lane agreed, calling Union Wharf “thebest-run wharf in the city.”

“The fishermen feel they are being pushed out, but that’s not true on our pier,” said Charlie Poole, president and wharfinger of Proprietors of Union Wharf. “Our mission is to keep this a commercial working waterfront property.”

Poole is the sixth generation of his family to own and operate Union Wharf, which was originally built in 1793.

Union Wharf is home to some 20 businesses and a dozen lobster boats. Most of the wharf is devoted to marine uses such as a bait company, lobster dealers, scallop dealer, ship’s agent, marine spill clean-up company, marine electronics firm, and the harbor pilots, but there are also architects, a financial services company, a realtor, and a restaurant at the head of the wharf.

“Because we have a diverse base on the pier, we can afford the repairs,” said Poole. “If it were just lobster boats, we could never maintain it. That’s the success of zoning.”

Poole is serving, as is Keith Lane, on the ten-member waterfront working group charged with recommending changes to Portland’s waterfront zoning during the six-month moratorium.

On Jan. 11, in response to the moratorium and mounting opposition, David Bateman dropped the hotel from his waterfront development plan that still includes offices, retail space and parking.

As to the loophole that might have allowed a hotel on the south side of Commercial Street, the Portland city council has signaled an intent to eliminate it once and for all.

“That door,” agreed Poole, “needs to be closed.”

Boothbay Harbor is a tourist town and Portland is a trendy little city. In Boothbay Harbor, they are buying piers surrounded by hotels to make sure fishermen have the water access they need. In Portland, they are using zoning regulations to prevent hotels and condominiums from displacing fishing boats. What both town and city are preserving when they seek to protect working waterfront is a little bit of the authenticity that makes them attractive in the first place. 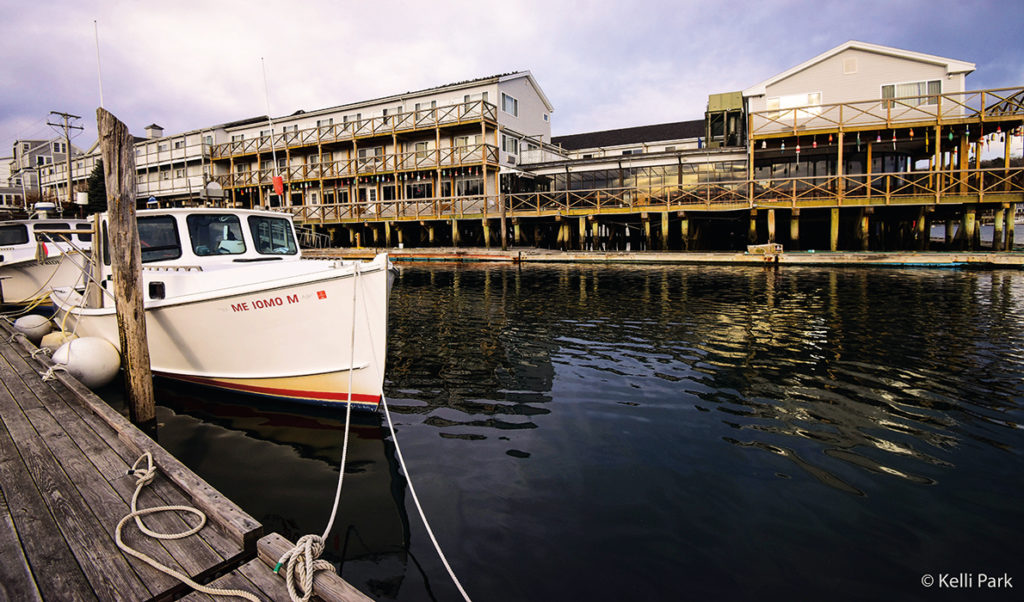 Mixed use or conflicting uses? An early winter scene in Boothbay Harbor captures the fishing industry’s presence along with nearby tourism-related buildings.