The April issue of The Working Waterfront featured two photos from the Library of Congress depicting the self-described Maine Hermit, who lived in Freeport. Terry Sue Allen, also of Freeport, noticed the photos and interviewed her father-in-law, Nathan Allen Sr., who lived across the street from the hermit.

Here is what she learned:

Charles Coffin, the hermit, was born in 1894 and died Nov. 15, 1941 at the age of 47. Allen wasn’t sure if Coffin was from Freeport, “but his parents, John and Florence Coffin, lived further up in the woods behind where Charles lived, so there is a good chance he was from the area. There are lots of Coffins in the Freeport area,” she said.

“He lived in a shack on the Desert Road across from the Leonard and Marion Allen farm,” where her father-in-law grew up. “He was a musician and singer, and he played the piano, organ and an instrument called a ‘sweet potato,’ also called an ocarina,” Allen said.

“And he was an artist. He painted on canvas, rocks and tree mushrooms. At the time he lived there, the Desert of Maine was a very popular tourist attraction,” she continued. “The cars would be bumper to bumper going to the Desert and would get backed up, so the Allens decided to earn some money off the backed up traffic and built a cabin for Coffin,” where he would play music and sell trinkets. Admission cost 15 cents.

“My father-in-law remembers how robustly he would sing and play, especially when performing ‘The Old Rugged Cross’ and when playing songs like ‘Casey Jones’ on his ‘sweet potato’ instrument.” 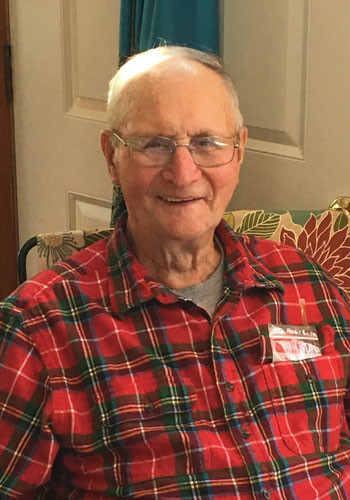 Her father-in-law said he remembers the Hermit telling him, “It’s harder to stay out of work than to just go to work.”

The Freeport Historical Society is mounting an exhibit that opens on May 15 featuring past Freeport artists, and work by Charles Coffin, The Maine Hermit, will be included.

The Working Waterfront thanks Terry Sue Allen for sharing the story with us.