It may look the same from the surface, but the Gulf of Maine is changing faster than nearly all other ocean bodies. We’ve all heard about the rate of warming sea temperatures, but the seafloor is also undergoing major shifts.

The seaweeds that grow on the bottom, the very base of coastal Maine’s “food pyramid,” are more abundant now than they were a decade ago. In fact, what we are seeing now on the seafloor may more closely resemble pre-1900 seaweed populations.

Prior to the boom and bust of the urchin fishery in the 1990s, “urchin barrens,” or large expanses of urchins, were common on the seafloor and most seaweeds were largely absent. With the population of their large groundfish predators vastly diminished, urchins were actually very abundant in the Gulf of Maine. But when Maine fishermen caught wind that Japanese buyers were paying top dollar for urchin roe, the urchin fishery boomed. Unfortunately, it went unregulated for too long, resulting in a scarcity of urchins.

Many (certainly not the urchin fishermen) may say “good riddance” to urchins, which are often considered a nuisance by lobstermen as they cling to their traps. However, urchins are the primary herbivore in the Gulf of Maine, and thus, are important to maintain a balanced ecosystem.

“Not all seaweeds are created equal,” says Thew Suskiewicz, a PhD candidate at Laval University in Quebec and former research technician at UMaine’s Darling Marine Center. “Some provide excellent habitat for baby crabs and others for adolescent lobsters,” but scientists have not done a good job of characterizing seaweed communities.

With funding from Maine Sea Grant, Suskiewicz and researchers from the Darling Center including Bob Steneck and Doug Rasher, conducted dive surveys this past summer to compare the composition and abundance of seaweeds today to surveys done in 2004.

In 2004, Suskiewicz surveyed over 100 sites from York to Machias. This summer, the dive team focused on the outer coast, from the mouth of the Sheepscot River up to Jonesport. At every site at both survey depths (15 feet and 30 feet), they found an increase in the abundance of Chondrus crispus, a red alga commonly known as Irish moss, and at nearly every site, more kelp (brown algae including primarily horsetail kelp, winged kelp and sugar kelp) compared to what they found at the exact same places 12 years ago. And as for urchins, none.

“In 2004”, Suskiewicz remembered, “all the Downeast sites were urchin barrens. This summer they were all seaweed and we didn’t encounter a single urchin.”

For example, at a site off of Petit Manan that was an urchin barren in 2004, they collected as much algae by weight as their most algal-rich site off of Damariscove Island, near the mouth of the Damariscotta River. In Jonesport, his team encountered a lobsterman who had a line caught up in his prop. While the research divers helped cut him free, the lobsterman reported that even just five years ago he was getting urchins coming up on his traps, and these days they never see urchins.

So, with urchins all but gone, we are in a very kelpy state, and one Suskiewicz predicts may get even kelpier. This shift to seaweed is good for both lobster and crabs. Kelp is a great habitat for adolescent phase lobsters, and Irish moss actually increases the survival of baby crabs.

Crabs don’t select habitat the way lobsters do. They settle indiscriminately. Their larvae just rain down from the sea surface. When they land in seaweed beds with a dense understory, like that provided by Irish moss, they actually have much higher survival than if they landed in urchin barrens. With more Irish moss around, more baby crabs can grow up to be juvenile crabs a few years later.

But crabs happen to eat juvenile sea urchins, making it harder for baby sea urchins to survive and repopulate. Thus, the seafloor seaweed continues to expand.

Now that they have measured the seaweeds, Suskiewicz and his team are exploring how these changes might have influenced juvenile crab populations.  They are getting a boost from Rick Wahle at UMaine and the American Lobster Settlement Index. Wahle has spent the past two decades carefully measuring the crab and lobster populations throughout the state.

Suskiewicz suspects that seaweed cover will continue to increase, particularly east of Penobscot Bay, where urchin declines occurred more recently. What is certain is that the seafloor ecosystem is fundamentally different from what it was in the 1990s, and it is continuing to dramatically change, even in the last 12 years.

This seaweed state could be good for ecosystem productivity in general. Crabs and lobsters may well be benefiting. But it’s important to remember how we got here, which is a testament to how much and how quickly humans can impact marine ecosystems. 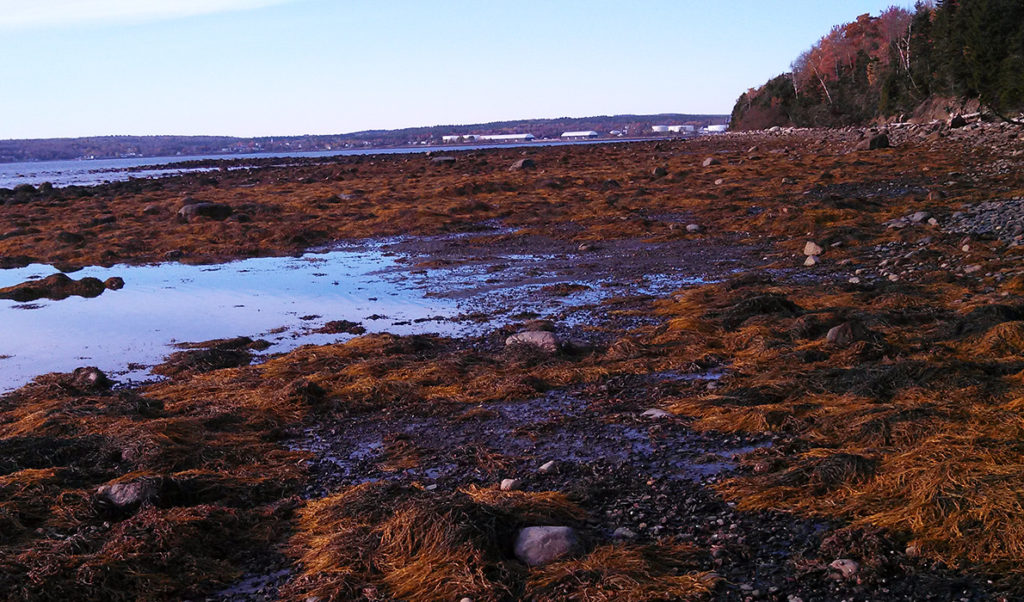 Low tide on the west side of Sears Island in Searsport.