The Death and Life of the Great Lakes, by Dan Egan;

The federal budget that President Trump proposed to Congress in March of this year reduces funding for practically everything in it except the military. And among federal departments, the largest reduction Trump recommended is to the Environmental Protection Agency: He wants to cut its funding by 31 percent. This would result in—among other things—a 97 percent reduction in financial support for the Great Lakes Restoration Initiative.

If you want to know what disasters this would be likely to unleash, read Dan Egan’s new book, The Death and Life of the Great Lakes.

Lakes Ontario, Erie, St. Clair, Huron, Michigan, and Superior hold about 20 percent of the freshwater on the Earth’s surface, and until about 200 years ago, they were an essentially isolated ecosystem, with the complicated, delicate balances characteristic of the Earth’s incredible biological diversity. Then, things started to change.

The first round of trouble got invisibly under way with the opening of the Erie Canal in 1825. Egan tells in fascinating historical and anecdotal detail how the sea lamprey, which was first spotted in Lake Ontario in 1835, is believed to have traveled from East Coast rivers into the lake through feeder canals. When the Welland Canal linking Lake Ontario and Lake Erie at Niagara Falls was expanded in the 1880s, it’s believed, the lampreys took advantage of the improved upstream flow; in 1921 they were found in Lake Erie. It was all uphill from there, as it were.

Sea lampreys are a particularly gruesome kind of parasite, latching their circle of teeth into the flesh of other fish and even humans. Lacking natural predators in the lakes, they were soon decimating fish populations. In 1936 they were found in Lake Michigan; in 1937, Lake Huron; in 1938, Lake Superior. By 1950, lake trout, whitefish and cisco populations had virtually collapsed. One fisherman who used to take 6,000 pounds of lake trout in an outing one day returned with six fish.

A wildlife biologist on a mission figured out in the late 1950s how to poison sea lampreys without killing everything else in their habitat, and still today, about $2 million a year is spent killing them. But the sea lampreys were just the first problem to come up the canals. River herring, aka alewives, made their way into the lakes by the late 1800s, most likely with either witting or unwitting human help. As the sea lampreys wiped out the lake trout, the alewives moved in, too small for the lampreys to bother with.

By the mid-1960s they were outcompeting practically everything else for food, swarming Lake Michigan. By 1967 they had pushed the ecological balance over the edge and suffered massive die-offs in which enormous rotting slicks of them clogged the water and shore. Divers saw 6-foot-high mounds of alewife carcasses on the lake bottom. There were so many dead fish fouling so much water and shoreline that officials hesitated to burn them for fear of polluting the air.

About the same time, wildlife officials decided to replace the vanishing lake trout with chinook salmon. Suddenly the salmon fishing got really good, but the introduced fish upset the ecosystem that was already upset by alewives, and in the late 1980s the salmon population crashed. Meanwhile the alewife population busted so precipitously that in the 1990s Wisconsin stopped the commercial alewife harvest. Their numbers are still declining.

That’s just the story of a few fish. Next Egan tells us what happened when the St. Lawrence Seaway, a massive, lock-building project intended to create an international shipping channel straight into the middle of North America, opened in 1959. It didn’t pan out very well, for a variety of Three Stooges-like reasons, but it did succeed in attracting relatively small ocean-going cargo vessels into Great Lakes ports. The cargo vessels brought with them ballast water from overseas and discharged it in the lakes. In the ballast water were—among other unpleasant things such as bacteria and viruses—zebra mussels and quagga mussels.

With no natural predators in the lakes, the mussels thrived and soon infested huge swaths of lake bottom, combing nutrients out of the water, starving much of the other lake life that depends on plankton, and growing so prolifically that they clog industrial and sewage pipes. Communities and companies shell out millions of dollars trying to keep them at bay.

Then there was the battle over the Chicago Sanitary and Ship Canal which connects Lake Michigan to the Mississippi watershed, where the mussels can get out of the lakes and destructive Asian carp, mistakenly cultivated in the South, can get in.

The future doesn’t look good, either. As severe droughts result from global climate change (yes, it’s real), nasty political battles are brewing over who can use the Great Lakes for drinking water, because contrary to the ignorant fantasies of Trump supporters like Newt Gingrich, lake water, like disappearing Western aquifers, is not inexhaustible. (Gingrich in 2005 told a Michigan chamber of commerce gathering, “’Do you know how hard it is to be ideologically so out of touch with reality that you’ve concluded Michigan could run out of water?’”, Egan reports. “Nobody in the room that day,” Egan says, “… made mention of the Aral Sea, the Ogallala Aquifer or Waukesha’s once ‘bottomless’ mineral springs.”) Already, Egan shows in some detail, people who live just a few miles from Lake Michigan have been denied use of lake water in their drying-up communities.

One obvious take-away from this well-written, absorbing and timely book: Humans made this mess, so it’s our responsibility to clean it up. Obvious, that is, if you have any moral conscience whatsoever. If, on the other hand, the Trump administration succeeds in gutting the Great Lakes Restoration Initiative, along with hundreds of other critically important environmental programs, then you can just read The Death and Life of the Great Lakes as an introduction to the ways a big mess will get worse. A lot worse.

Dan Egan, twice a finalist for Pulitzer Prizes, lives in Milwaukee, Wisconsin, where he is a reporter for the Milwaukee Journal Sentinel.

Dana Wilde of Troy is a columnist, editor, Fulbright scholar and former college professor. His collection of writings on Maine’s natural world, Summer to Fall, is available from North Country Press. 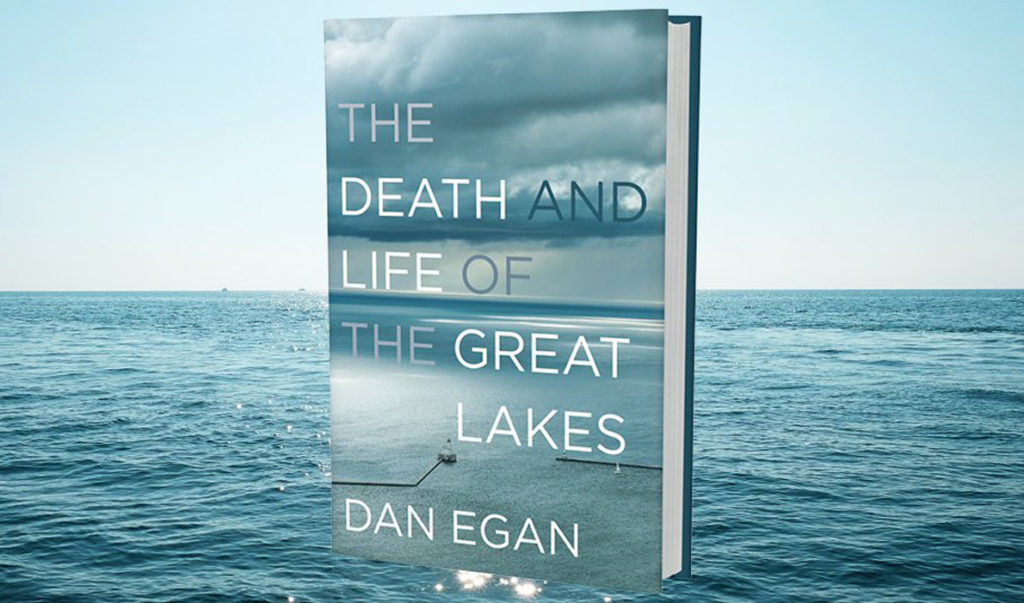