When Beverly Johnson and David Hill founded Chebeague.net, Chebeague Island’s internet provider, their primary goal was to provide islanders with a faster alternative to dial up. Little did they know it would become an important tool for lobstermen.

Lobstermen use the internet to call home, receive lobster orders, check the weather, and pin down lobster prices. And for Chris Rich, a search engine was integral in his quest to rebuild a 30-year-old boat engine.

Rich, 57, a life-long island resident, is a gifted generalist who can do just about anything from speaking Icelandic to building a house and a lobster boat.

He began working on engines when he was about ten, dragging old lawnmowers home from the dump, taking them apart, and putting them back in working order. He remembers wanting to use one of these motors to make a go-kart. His father, Herb Rich, a clever man in his own right, took the crank from an old-fashioned ice cream maker and transformed it into a differential. The idea worked and the boy had his go-cart.

Over the years, Rich has replaced gasoline marine engine parts and worked on his own diesel engine, but he had never rebuilt a diesel engine from scratch.

Boatyards serve as island grapevines, so it’s not surprising that Rich was at the Chebeague Boat Yard when he heard that David Miller was replacing his 30-year-old engine. Having been told that parts were impossible to find, Miller feared the engine might fail during shedder season, so he reluctantly decided to replace his Isuzu 6BD1 diesel.

Despite knowing that finding replacements for the faulty parts would be tough, Rich decided to buy the engine because it was the same model as his, and it had perks such as stainless steel in places where his engine had cast aluminum. But challenges lay ahead.

With a well-worn copy of The Workshop Manual that he bought on eBay—filled with diagrams and information about the Isuzu 6BD1—Rich soon found that even lobstermen are the victims of planned obsolescence. It seemed that the mechanic was right, parts were not just lying around waiting to be discovered. When he entered the engine model number in Google on his paint splattered Iphone, he never imagined the parts would be found all over the world.

His first quest was a general rebuild kit. That took him to Rudy’s Diesel in California. Next, he searched for an oil pan. A place in Connecticut quoted $790 for the Japanese-made part, which Rich thought was pretty steep, so he went back to his iPhone. The same part, also made in Japan, was found in the Netherlands for $500 Euros (about $550). This included shipping and a significant value added tax, but the savings was $240.

The crank, idle timing gears and camshaft were ordered from Guangzhou, China, but arrived by way of Hong Kong. The crankshaft was ordered from NKR, a Florida company. NKR could have also provided the valve springs, but Rich didn’t want to wait seven weeks for it to arrive, so he returned to the internet and found the same part in Australia, and it was delivered in half the time.

Rich soon discovered he needed additional tools to complete the job. He was able to buy a liner puller in North Carolina, and through his iPhone, discovered he could even buy some tools here in Maine. A China-made shop press was purchased in South Portland, and he bought an engine hoist in Portland.

But David Miller’s mechanic was right. Some parts and tools could not be found. Rich set aside his iPhone, but not his quest. He drove down the road to Chebeague’s own master mechanic, Chris Burgess, who was able to fabricate what was needed to finish the job.

Although Rich successfully rebuilt the engine, he hopes the Isuzu currently in his boat will last this season. He plans to install the rebuilt engine next winter when things are slower. But he knows that if the old one dies during shedder season, his boat Stelias (named for his sons Stephen and Elias) will only be out of service for a few days.

Thanks to mechanical ability, ingenuity, and a willingness to navigate the web, Rich’s “new” 30-year-old Isuzu 6BD1, complete with parts from Chebeague to Australia, starts on the first try and runs like a charm. 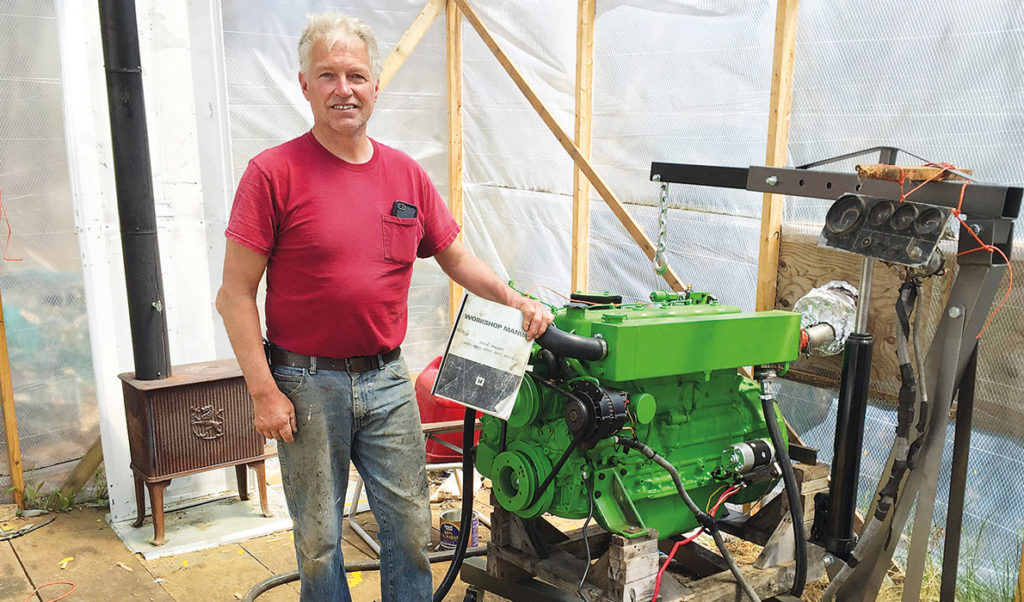