Wildes, 28, is tasked with the oh-so-important job of helping reverse two of Maine’s biggest demographic challenges—its stagnant population growth, and its oldest-in-the-nation population status. Both impact the state’s ability to have a growing, thriving economy.

Earlier this year, Wildes was named executive director of the organization Live+Work in Maine, which makes the pitch that life here can be rich and fulfilling, and that rewarding employment opportunities are here to be seized.

At its most basic, Live+Work is a website with a job board. But as Wildes explains, the concept marries a quality of life component to the postings. His generation—the millennials, born between 1980 and 1998—don’t want to live to work. Rather, they want challenging, enriching work days that allow them to easily transition into an afternoon snowboarding, an evening catching a band at the local pub, or kayaking on Saturday morning before ending the days with dinner at a new bistro.

“Your living and your working, it’s a package deal,” Wildes says.

The website offers users the opportunity to match employment with lifestyle, he explains, a unique approach to the important effort of growing Maine’s work force. Alongside job postings is information about quality of life amenities in the area the job is located.

Maine has billed itself as Vacationland since the 1930s, and it enjoys a robust tourist economy, but as Wildes notes, today’s pressing need “is people to live and work here.”

In recent years, the state’s tourism strategy has touted some of the same qualities that Live+Work in Maine is promoting—attractive small towns with good restaurants, coffee shops, brew pubs, and easy access to outdoor recreation and the salt water—thereby dovetailing well with the live and work here pitch.

In fact, Wildes presented information about Live+Work at a recent statewide tourism conference.

Maine’s cachet outside the state is that it offers quality and value for visitors, but too many think it’s a state full of lumberjacks and fishermen, Wildes says.

“They don’t know there are jobs here to get them here,” which is the conundrum.

Wildes’ own story reveals some of Maine’s weaknesses as a draw.

He grew up in Cumberland, which he says offered good public education, and then attended the University of Maine, which provided the same.

But, like many ambitious young adults, he first aimed to attend a prestigious out-of-state college, believing it would better launch him on his career path. Rethinking that bias actually informed the admission application essay he wrote for UMaine, which traced the evolution of this thinking to finally conclude that the in-state public university was a good choice.

Sadly, he says, the culture at UMaine among faculty and staff often encourages career paths that lead away from the Pine Tree state. High school guidance counselors also fail to dispel the notion that good careers don’t exist here, he said.

And so, like many others, Wildes left, taking an internship with then-Sen. Olympia Snowe.

Then, it was a two-year stint in Cincinnati as a consultant, a job that, ironically, came through his affiliation with a UMaine-based organization. He and his now-wife returned, though, and live in Bath.

Live+Work intentionally does not promise to be all things to all job seekers. Winter is long, so if you hate the cold, well… Our biggest city has a population of 65,000, so we really can’t offer an urban experience.

Will you make less money in Maine than in Boston or San Francisco? Yes, but you’ll have easy access to beaches and skiing. And your rent payment in the big city might equal two or three-monthly mortgage payments in Maine.

“If the spreadsheet is all you care about, you’re going to be unhappy in Maine,” he says. So the question is, “Do you want what we have to offer?”

Millennials are a likely target, he concedes, but there is no magic bullet. International immigrants must be part of the mix, too. Even if everyone graduating from a Maine college stayed, there will not be enough, Wildes says.

Live+Work was founded as a private company by Ed McKersie in 2015, and Wildes wanted to volunteer to help, but McKersie offered him a job.

The state Department of Economic and Community Development provides Live+Work with $100,000 in annual funding, a small amount when compared to the $16 million spent on tourism marketing, he observes. Employers also fund the effort, with a dozen kicking in $12,000 each. Five-hundred employers have profiles on the site.

But Live+Work in Maine is not a recruitment firm, Wildes stresses, but rather an economic development tool, one that is overdue.

“The competition is global,” he says, citing similar efforts in other states. The good news is that “We’re starting with good bones,” with a reputation for hard-working, individualistic people, a clean environment, and human-scaled communities.

But Mainers have, at times and in some places, been hostile to new arrivals.

“We don’t have to change our character,” he says, “but we have to be loud and proud” about what Maine offers. “If we don’t turn up the volume on what we’ve got in Maine, we’ll have no one here to be skeptical about,” he wryly notes. 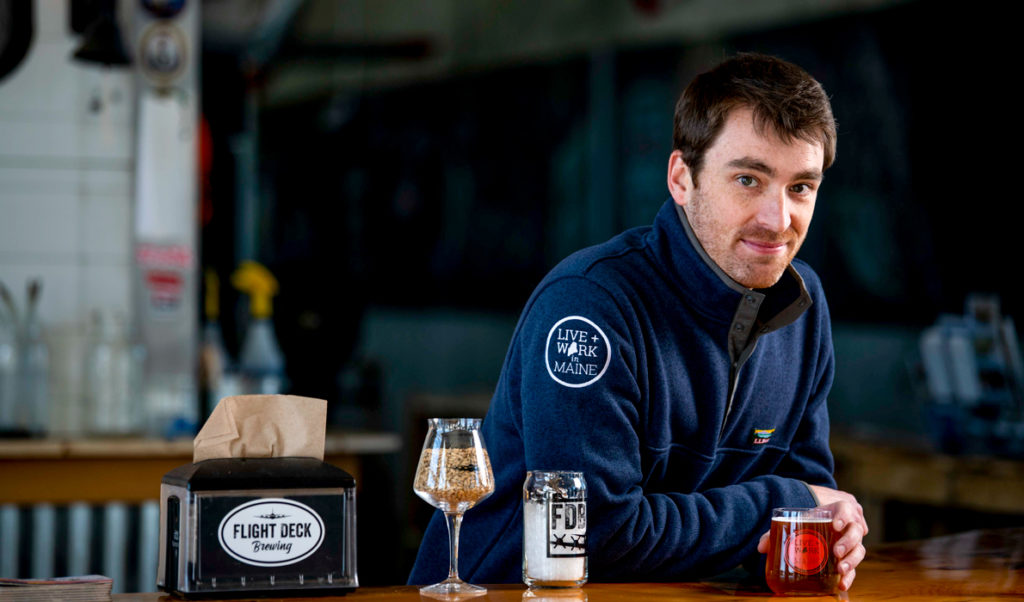