In a small, once-isolated Maine community like Mount Desert Island, before it became a destination resort, boatbuilding was a necessity. Everyone lived on an island; roads were few or nonexistent; water was the way to get around the island or reach the mainland. A boatbuilder who could adapt to new technology and be mindful of the changing needs of his customers could do well.

On MDI at least, boatbuilding tended to run in families: Stanleys, Riches, Spurlings, Bunkers, Grindles, Sargents, Butlers, Hinckleys and others. Most of these boatbuilding families date from the island’s early settlements at the end of the 18th century, although a few builders came “from away” to marry into local families, join existing firms or learn from older craftsmen willing to pass along their skills.

Schreiber’s style is chatty and entertaining as she visits the shops or sits in the living rooms of various active and retired builders, teasing out their stories and then following narrative threads that lead her all over MDI and beyond. She has an ear for Downeast language and dialogue; reading these stories, we hear their tellers clearly. Chapter after chapter, these tales are fun to read.

This is a book about people, first and foremost. Boats are part of it of course, but it’s their builders that Schreiber (who is a regular contributing writer to The Working Waterfront) seems most interested in. Thumbing through the book before I began to read it seriously, I turned to the people I knew, featured in a chapter near the end: Farnham Butler and Cyrus Hamlin, inventors of the reverse-sheer Controversy yachts they produced at the Mount Desert Yacht Yard in the 1950s. Someone in my family had heard about Butler and Hamlin, and we chartered one of their boats in 1954. One of my earliest sailing memories is crewing with Cy Hamlin aboard Guidon, a Controversy 26, in that year’s Monhegan Race. We didn’t do particularly well as I recall, but Hamlin had at least learned how well his design would perform in a long race.

Our charter extended on into August of that year, meaning we had charge of Guidon during Hurricane Carol as she dragged her mooring and banged on the bottom, fortunately without major damage. Glued-strip construction had been laughed at by other builders, but it proved itself in the hurricane.

Schreiber’s at her best when she lets her subjects tell stories about themselves and each other. Here’s Richard Stanley, a son of boatbuilding icon Ralph Stanley who’s profiled in the book, on brothers Frank and Uly Rich: The brothers were Jehovah’s Witnesses, Stanley tells her: “If they built you a boat, they’d give you a Bible, too.” Then Schreiber, warming to her divine subject, goes on to discourse on Elias Rich Sr., an ancestor of many boatbuilders named Rich, who was known as “Heavenly Crown” for his faith. If you wonder what it all has to do with boatbuilding, don’t worry about it—this book’s about a lot more than craftsmen or the sea.

Boatbuilding has its traditions, but they haven’t stopped change. Wars, particularly the 20th century’s two world wars, brought new demands and opportunities for builders of small craft: those who could adapt to mass production on accelerated timetables could do well on government contracts for minesweepers, PT boats and landing craft, and Schreiber recounts oft-told tales of negotiations with representatives of the Army and Navy, some of whom knew more about boats than others.

Then there was Prohibition and the opportunities it presented for anyone who could produce a really fast boat. “During Prohibition,” Schreiber writes, Chester Clement “built speedy boats.” There was the Maybe, 80-feet long with three engines, with “armor plate by the steering section.” The Maybe got through one Coast Guard inspection by pretending she was a fishing boat, but was caught later on “with a load from offshore.”

The biggest challenge faced by MDI’s boatbuilders came in the 1960s, as fiberglass became the accepted standard. Some builders shied away from it, particularly in the early days. Others—Hinckley comes to mind—embraced fiberglass and thrived.

One last story, told by Hank Hinckley about his father, Henry, who was laying up a small outboard boat. Bink Sargent, his partner, had to go home for Sunday dinner. “So Dad said, ‘I’ll finish up. You leave the beer.’ Dad sat down and had a beer, then finished up, then sat back down and had a couple more beers, then tried to get up. He was stuck. His pants were stuck down—he’d had so much to drink he didn’t feel the warmth. He had to cut his pants. That’s the kind of thing that went on in that back room.’ “ 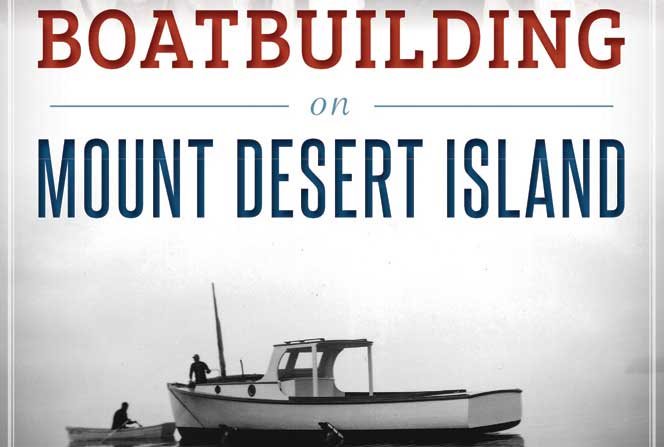