Donna Wiegle turns the concept of time on its head.

Many of us would demur if asked to serve on a committee or take on a volunteer project, saying we’re too busy.

The Island Institute, publisher of The Working Waterfront, awarded her with its Community Champion Award at the organization’s annual Waypoints Forum in Portland on Feb. 8.

Wiegle, 59, is the paid, but part-time director of Swan’s Island’s Mill Pond Health Center. That job, she told the newspaper in 2013, means everything from taking blood from a lobsterman for a diabetes test at the crack of dawn, to cleaning the toilets and mowing the lawn.

And, owing to a serious health issue, Wiegle also faces diminishing time in another sense.

“About three years ago, I was diagnosed with an advanced stage ovarian cancer,” she told the audience of about 200.

“It came as quite a shock to my husband and myself. I started chemotherapy and I lost all my hair, and the usual things that happen. And I did some soul searching,” she said.

In fact, she explained, what made the most sense was to continue her community service work.

“I do the things I do because I love people. I want to help my neighbors.” And the reward is greater than the effort, she said.

“I need to do the work that I do because it’s so fulfilling for me, and I’m grateful for every opportunity that I’ve been given in my life. I will continue to work hard for my own community as well as the coast of Maine.”

Wiegle’s resumé also includes her work on the island as writer and photographer for its newsletter; designing websites; doing photography for the fire department; serving, in the past, on the historical society and garden club boards; and being named the Mount Desert Island area YWCA’s Hancock County woman of the year 2015.

And she serves on the Island Institute’s board of trustees.

“All of you who live on islands volunteer for 20,000 jobs a year, and everybody knows how demanding that is. There isn’t an island, or a village, or a town, or a city that wouldn’t love to have (Wiegle) as a resident.”

Wiegle echoed the view that she had many peers, saying: “There are many community champions sitting here today.” 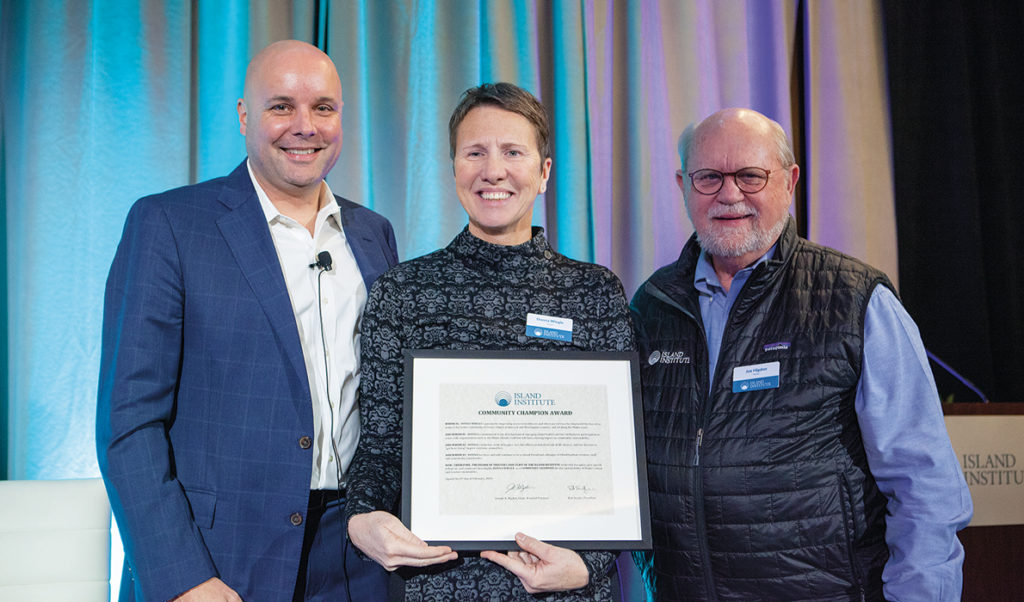