Lesley and Leah Ranquist of Swan’s Island, sisters in their early 20s, were first introduced to fishing when they were mere kindergarteners. Now they are among the 4 percent of women currently holding commercial fishing licenses in Maine.

Lesley and Leah’s story isn’t just noteworthy because they’re young women making a good living in an industry dominated by men; their introduction to lobster fishing started with a grandfather who fished with only two fingers and a thumb.

In 1959, Ricker Ranquist was working on a power line when he suffered an electrical shock, tragically losing one arm just below the shoulder as well as two fingers on the opposite hand. A man of extraordinary determination, before long he was not only skillfully repairing his own lobster traps, he was building new ones.

When his granddaughters Leah and Lesley were four and five, he invited them to climb onboard. By age 11, apprentice licenses in hand, the girls were hauling between 25 and 50 traps alone in the family skiff.

“Our grandfather taught us the meaning of hard work,” Leah says. “Above all, never once did he imply we girls couldn’t do man’s work. I have a college education, but this is where I want to be—chasing lobsters off Swan’s Island.”

In the summer, she sets more than 400 traps with hopes to expand to 600 (the amount allowed in their conservation area) in the next few years. Lesley, preferring her own pace, has every intention of catching up soon.

Leah, 23, captains her own boat, a 32-foot North Shore, while Lesley, 16 months older, shares her 36-foot Osmond Beal with her father, Les Ranquist.

“My dad would much rather be a lobster dealer in the summer and drag for scallops in the winter,” Lesley explained, “so this arrangement works well for us.”

On a foggy Saturday, Leah and Lesley each took me out on their separate boats to check on the day’s catch. We ventured south towards Sally’s Ledges aboard Leah’s Surprise, then on Lesley’s Water Girl, hugging the southern shore of Swan’s towards Little and Big Bakers.

The two synchronized their movements so gracefully it reminded me of a well-rehearsed ballet. Leah’s sternman had the day off so Lesley obliged; it was apparent they had spent thousands of hours together, navigating, hauling, sorting and tossing back berried females. Not one instruction was necessary as they shared how challenging it was to find good stern man willing to work with a female captain, how important it was to respect the rules of the game, and above all, and despite the challenges, how much they both loved fishing for lobster.

“Our father and grandfather taught us well,” Leah said admiringly. “We’re aware of the risks, yet we’re also experienced. If you’re smart and willing to work hard, you can make a good living.”

She’s right. According to the Department of Marine Resources, in 2015 more than 121 million pounds of lobster worth over $500 million were landed.

There are few boundaries for women in the lobster fishery beyond history and tradition. It is grueling work physically, yet more and more women are embracing the challenge. On Swan’s Island alone, there are currently ten women who have commercial fishing licenses. As long as there’s enough lobster to go around, the numbers are apt to increase with the demand.

“I’m proud of my girls,” Les Ranquist said of his daughters. “They’ve done well in a man’s world. They hold their own, both are hard workers, wise to the sea, and fearless. That’s pretty unusual.” 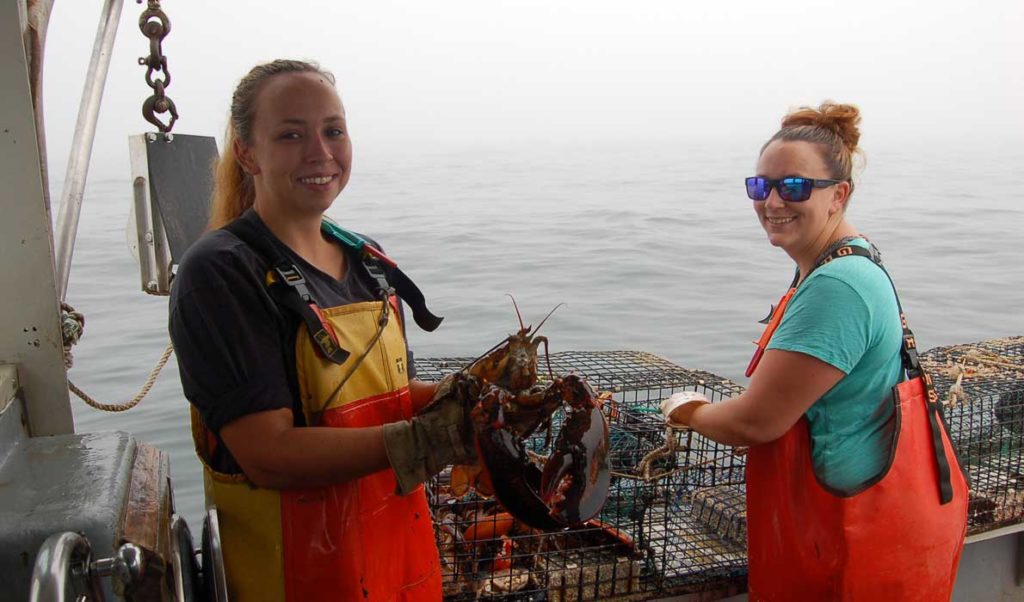