Swan’s Island residents Sonja Philbrook, Charlie Wiegle, Debbie Staples and Tammy Tripler had prepared for the special town meeting. They had slides, timelines, recommendations and everything else they might have needed to convince residents it was time for a new ambulance.

But first responders on an island know to expect the unexpected. So when an emergency call came just an hour before the ambulance service crew was scheduled to make the pitch for a new ambulance, the EMTs didn’t think twice. The priority was helping whomever was in danger.

“In the end, it turned out to be a routine call,” said Wiegle, the island town’s emergency management director and an EMT. “An electric appliance making a lot of smoke. But anytime that call comes in, you get ready to face anything.”

The EMTs were able to present to the town meeting as originally planned. Indeed, it may have been a blessing in disguise for that call to come through when it did.

“You come walking in to do the presentation smelling like smoke and all jazzed up from a call,” Wiegle said, “Well, you know, that helps.”

The meeting at which town approval was given to spend $110,000 for the new ambulance was in January. By early summer, the ambulance was on-island.

The spending for the new ambulance represented more money than either the ambulance service’s or fire department’s annual budget, but the ambulance is expected to last for many years. Its predecessor served Swan’s Island for 21 years.

When the old ambulance broke down on a call last year, the department knew its time had come. It would take almost 18 months of research, discussion and persuasion until a new ambulance would arrive.

Service director Staples, along with Tammy Tripler, Jil Lewis, Wiegle and Philbrook, worked with Professional Vehicle Corporation of Rumford to build an ambulance that met the island’s needs.

The nearest hospital is a 40-minute ferry ride plus a 15-mile drive away. It was imperative that the new ambulance have improved patient (and EMT) comfort for what could be extended time in a confined space. A new ambulance would need to maintain full medical functionality even if its engine—as is required on the ferry—was shut off. A new ambulance needed higher ground clearance to navigate the ferry ramp during the lowest of tides. And the town wanted a manufacturer willing to travel to the island for service if it couldn’t be driven off island.

Perhaps most important, it needed to ensure privacy for the patient.

“If the ambulance is waiting for the ferry, sometimes you have people peeking into the windows, knocking on the glass,” said Philbrook, so the new ambulance was given tinted windows.

Annual ambulance calls hover around 45, with roughly half of those resulting in transports—via the ferry or LifeFlight helicopter—to Mount Desert Hospital.

The new ambulance arrived on-island in July and was quickly put to the test: in its first four days there were four calls. In the months since, there have been 17 calls resulting in ten transports to the mainland.

And while EMTs expect the usual drop in calls over the quieter fall and winter months, the ambulance is proving to be up to the task. So much so that, according to lobsterman Kenny Lemoine, the EMTs “Better start fundraising for the next one the way they’re using this one.”

For now, both EMTs and residents are comforted knowing the new ambulance is on the job.

Gideon Davidson is an Island Fellow on Swan’s Island through the Island Institute. He works with the island’s emergency services departments to provide community outreach, education, volunteer recruitment, training and retention and to research the latest technology and standard operating procedures. Davidson is a graduate of Stanford University with a degree in English. 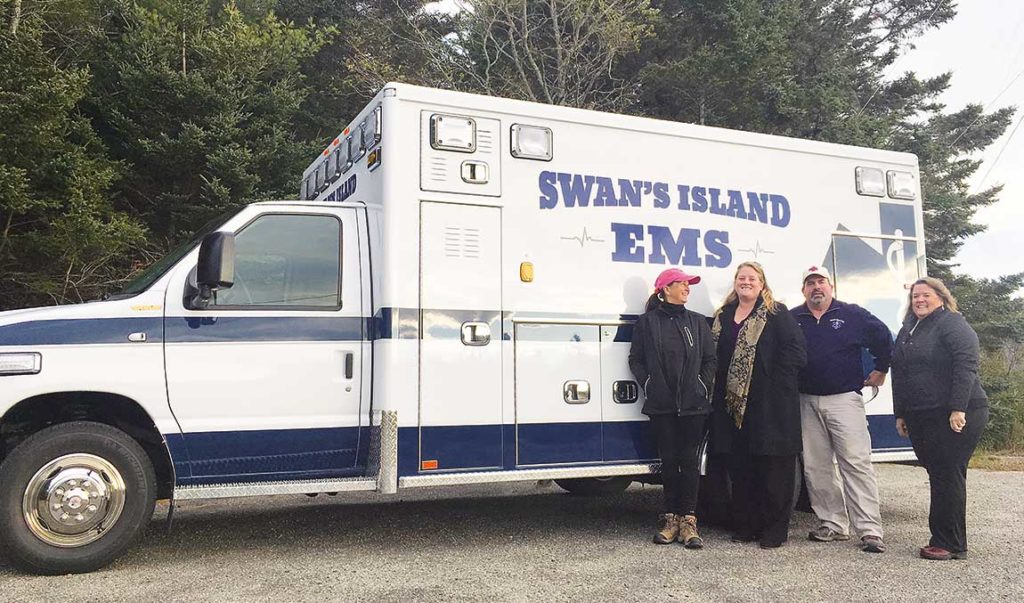