The advantages of attending a small, island school are many. But often, educators must work to combat the insularity and isolation of those schools.

For the Swan’s Island School, a ticket off the island to the larger world came through Educational Passages, a long-established program that helps students learn about ocean currents.

“When I came to Swan’s Island, I thought, ‘This will be perfect here,’” said Michelle Whitman, who is in her first year at the island school, teaching 15 students in grades 6-8. A veteran teacher, she was familiar with the program when she was teaching at a middle school in Holden, near Brewer.

Educational Passages provides schools, for a cost, with 5-foot-long plexiglass boats that are equipped with GPS tracking devices. The boats are launched along the East Coast and most of the time, they are carried by the Gulf Stream and North Atlantic Drift currents to Europe.

“We have one boat,” Whitman explained, and she and her students visited Maine Maritime Academy’s training ship State of Maine in late April to deliver it. Academy students then launched the small boat near Charleston, S.C., where it should be carried by the current north and then east.

“The goal is to get it out into the Atlantic current,” she said.

In all, Educational Passages provided 34 boats to classrooms in seven different countries, along with the U.S., this spring. The program, started by Belfast resident Richard Baldwin, aims to teach “ocean and environmental literacy,” according to the group’s website.

The boats are built by students in the Rockland-area technical school.

“We name it, paint it and decorate the outside,” Whitman said. The students dubbed their vessel Black Rock, a reference to a ship on the TV show Lost.

The island students decided to include samples of rock, sand and shells from the island in their boat’s waterproof container. There’s also a document with a link to a website on which is posted a video about life on Swan’s Island for those who may find the boat in Europe or even Africa. Producing the video, which entailed interviewing people in the community, was part of the project.

“The kids worked really hard on the interviews,” she said. “I bet we interviewed 30 or 40 people.”

More real-world skills are learned if the boat gets hung up somewhere. If Black Rock gets into trouble, students will have to contact the U.S. Coast Guard, NOAA or fishermen.

“The fun really comes now,” she said, as the boat makes its way across the ocean. Based on past data, “We suspect it will land in Spain or Ireland,” Whitman said, but it might also run ashore on the coast of Africa, or turn east into the Mediterranean Sea.

The battery-operated GPS sends out two “pings” a day, reporting its location. The battery is expected to last up to 1,000 days. The island students will learn about ocean currents as they track the boat, and could discuss the cultures and geographic features of the countries it passes.

Directions on how to contact the island middle school students for those who might find the boat on the other side of the Atlantic are written in Portugese, Spanish, French and Irish, she said. If the boat is damaged, parts could be sent to repair it.

Whitman imagines her students learning how to email people and groups in Europe, a communication skill that builds confidence, and provides them with connections across the ocean.

“It’s problem solving in the real world,” she said.

If found in Europe, the boats are relaunched offshore, with the hope that they will be carried back to the U.S. by the winds and currents.

Delivering the boat to Maine Maritime Academy also was a learning experience. The captain of the State of Maine, Leslie Eadie, brought the students onto the ship’s bridge and explained what the academy students would learn on the training voyage, which Whitman noted suggested career options to her young students.

For more information about the program, see: EducationalPassages.com. 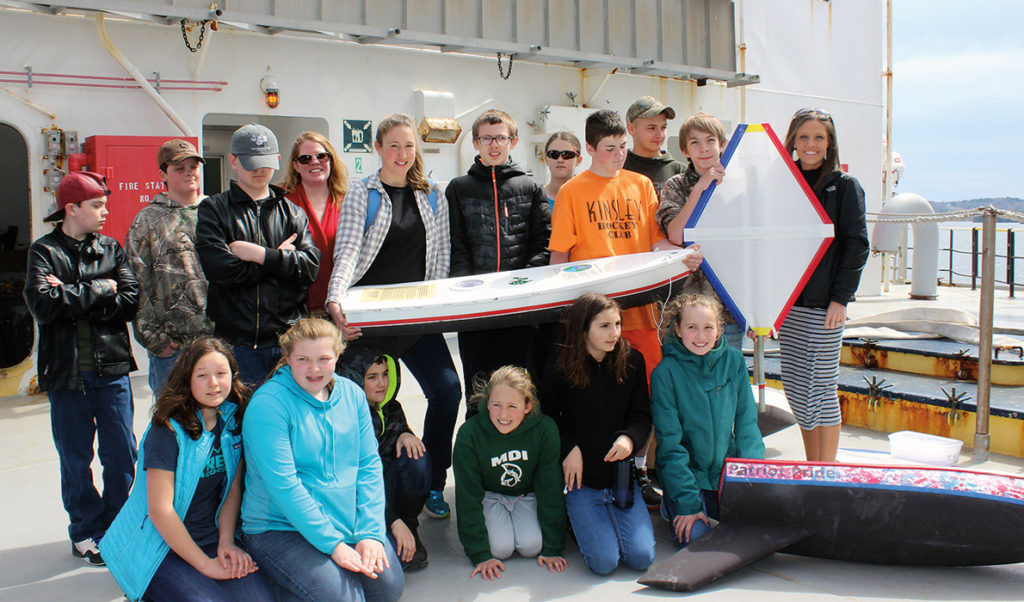