The obstacles and challenges that come with being the principal of two island elementary schools are many. But those jobs also come with something educators like Heather Webster long for—deep community support.

Webster, 42, lives in Bar Harbor with her husband and two children, but commutes to Swan’s Island Elementary School and the Ashley Bryan School on Islesford (Little Cranberry Island). The Swan’s Island post, which she’s held for five years is 60 percent of full-time, and the Islesford post, where she’s been for four years, is 30 percent.

“It’s a lot of scheduling and prioritizing,” she says of managing the transportation and time challenges, and indeed, to arrange our interview, she sent an email listing her locations and meetings for the coming week, and they were many and all over the map.

“My office is my backpack,” she says.

“It’s practically impossible to be on both islands on the same day,” she added, because in addition to the hours spent in island schools, there are meetings with the superintendent and business manager in Bar Harbor. The island schools are independent but also rely on services through the district based in Bar Harbor.

Making it all work means relying on staff, Webster says.

“The key is delegation, but in small schools, delegation isn’t really possible,” she said. Staff already wear many hats, often on short notice.

“I was the substitute lunch lady the other day,” Webster said, and other staff dive into similar role changes. 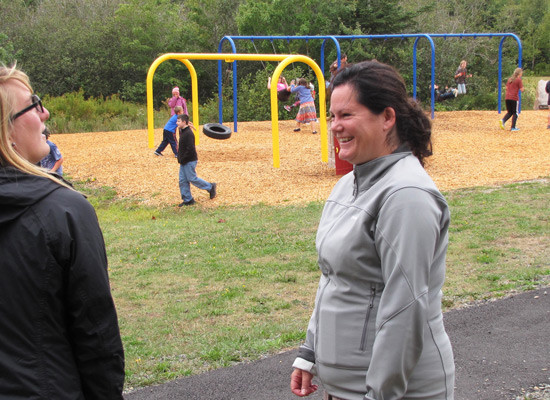 The K-8 Swan’s Island school has 37 students this month, with four full time teachers and a handful of support staff, including educational technicians. Art and music teachers travel to the school a day or two each week.

The Bryan school on Islesford has 17 students (none in grade eight this year, so it’s a K-7 school). Two full time teachers and one full time educational technician make up the staff.

“We still have to abide by all the rules,” Webster said, but teachers are given conditional certification in some subject areas. Hiring staff means looking for more than educational skills.

“It has to be the right person for the job, someone very flexible in their thinking,” she says. And often, the work continues hours after the school doors close.

Along with the flexible and dedicated staff, the community pitches in ways unimaginable in most mainland schools.

The Swan’s Island building, now 20 years old, experienced some water problems the previous week, and Webster was off island. A couple of phone calls later, four people from the island were in the school, checking out the situation. Another example she gives of the community pitching in: a parent returning from the mainland will volunteer to bring pickup the milk to bring to school.

“Our parental and community support for the school is unbelievable,” she says. School events that bring out every child’s parent are not unusual. During basketball season, classes end at noon and almost everyone on the island comes to the game.

“It’s their school,” Webster explains. Islanders work hard to pay for the building and staff and understand that such sacrifice keeps their children and grandchildren at home through 8th grade. (Most commute to Mount Desert Island High School for grades 9-12).

“Everyone has that common goal. They want to keep the kids on the island and they want them to be the best,” she says. “The community wants the school to succeed. It really shows.”

Islesford has a much smaller winter population than Swan’s, Webster notes, but the community works to sustain that school, too.

On Great Cranberry Island, residents of the Cranberry Isles municipality (which includes Islesford) have committed funds to renovate the Longfellow School, another example of community support. That work should be complete by the end of November, she said. The renovated school prompts educational questions, she said: Should children attend on their home island? Should the buildings be used segregate by age?

“They’ve gone to school together for nine years,” Webster said of the students. “Most of them are cousins or otherwise related.”

Field trips help expose the children to the wider world, and the school works to make connections with mainland and island middle school. The Island Institute Teaching and Learning Collaborative, or TLC program, also helps bring the children together with peers.

But the closeness is also a benefit. Standing on the playground during recess, Webster points out a 7th grader pushing a 2nd grader on the swing.

Along with the community support, what’s satisfying to her?

“I know all the kids. It’s great to come in and know something about all the kids.” Sometimes, maybe while climbing down a ladder onto a boat for a late night trip back to MDI after a school event, Webster will shake her head about the vagaries of the job, but it’s with a smile, she said.

“I’ve never had two days that were exactly the same.”

Before landing the principal jobs, Webster taught 2nd and 5th grade classes at Hancock Grammar School. She earned her bachelor’s degree at the University of Maine at Farmington, a master’s degree at Drexel University in Philadelphia and is now working a PhD through Northeastern University in Boston. 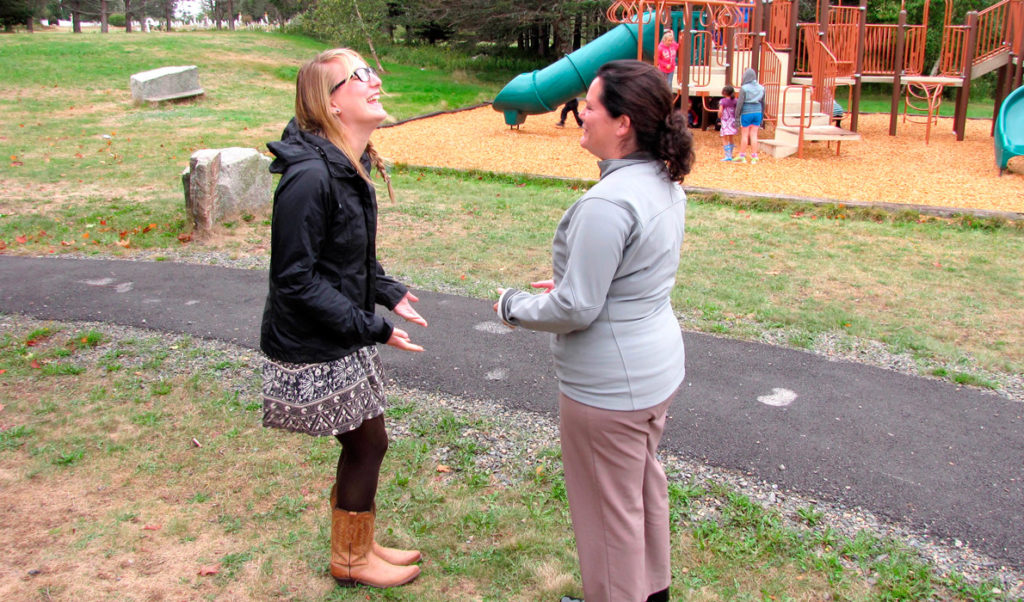