The theme that emerged from among several speakers at a ribbon-cutting ceremony on Dec. 2 marking the linking of the Down East Sunrise Trail with High Street in Ellsworth was “sharing.”

The trail, which follows a former railroad bed from Ellsworth to Pembroke, and eventually to Calais, will be enjoyed by snowmobilers and ATV riders as well as by hikers and bicyclists.

The “Share The Trail” signs along the route, said Sue Ellen Bordwell of the East Coast Greenway group, “mean something different than they do in Florida or D.C.”

The Down East Sunrise Trail is part of the effort to create a pedestrian pathway linking Calais and Key West, Florida, and as such, is the longest continuous off-road trail in the greenway, she said.

Bordwell also complimented the local group for seeing its work in a two-county context.

“You look at this as a regional issue,” she said. “And you’ve branded it that way.”

But other speakers were more inclined to see the completed trail in the context of economic development.

The effort to convert the dormant rail line into a trail began in 1987. The Sunrise Trail Coalition formed later to allow users and other stakeholders to have a voice in the plans, Stephen Rees, the coalition board president said. The two goals were to provide a place for healthy outdoor recreation and to spur economic development.

The 85-mile section from Hancock to Pembroke opened for use in 2010. It was constructed with funds from the sale of the rail steel, as was the last leg.

John Phillips, Ellsworth’s mayor, said the completion of this leg—from Washington Junction in Hancock, to High Street in Ellsworth—would bring more people and more spending to the city. He also hailed the inclusion of motorized transportation, as a self-described “avid snowmobiler and a person who uses ATVs.”

The state Department of Transportation was a partner in the project. DOT Commissioner David Bernhardt also highlighted the multiple use component.

“I’m sad that I didn’t bring my truck with the four-wheeler in it,” he said, joking that he should have canceled his meetings in Augusta.

“This is truly part of Maine’s transportation network,” Bernhardt continued, and predicted it would encourage people to visit the city’s restaurants, stores and lodging businesses.

He also praised the contractor, Lane Construction, for “a job well done.” The last leg includes a 2-mile paved pathway that parallels the stretch where the rail remains. The work cost $1.3 million. A seasonal excursion line run by volunteers still uses that section of track.

“You really had to field-fit a lot things here,” Bernhardt said to the Lane Construction crew.

He also said the project served as a model.

“No one entity today can make things like this happen,” he said, and praised the trail’s early proponents for gathering stakeholders “and leveraging money, and leveraging knowledge.”

Walter Whitcomb, commissioner of the Department of Agriculture, Conservation and Forestry contrasted the rail trail with carriage trails in nearby Acadia National Park. The Down East Sunrise Trail now begins adjacent to Route 1 and hotels, he noted.

“Recreation is an industry, an industry that touches Maine people,” Whitcomb said. The different users of the trail are “integral to our culture, and not even all of Maine understands that. We can coexist on our trail systems.”

“This is a catalyst and this will help,” he said.

Rep. Louis Luchini, D-Ellsworth, spoke about non-motorized use.
“I grew up running this trail,” he said. “Now I won’t get in trouble for running on the rails,” he joked.

Erik Da Silva of the Bicycle Coalition of Maine said the trail would provide a safe place for bicyclists to develop skills and confidence. He said bicyclists were “big spenders” on their trips to such trails.

Fundraising is underway to establish information kiosks and picnic tables along the route. A primitive campsite already has been established at mile 32 of the trail.

DOT will continue to own the corridor. The state Bureau of Parks and Lands managed the construction work and will maintain the trail.

Among the groups supporting the project are: 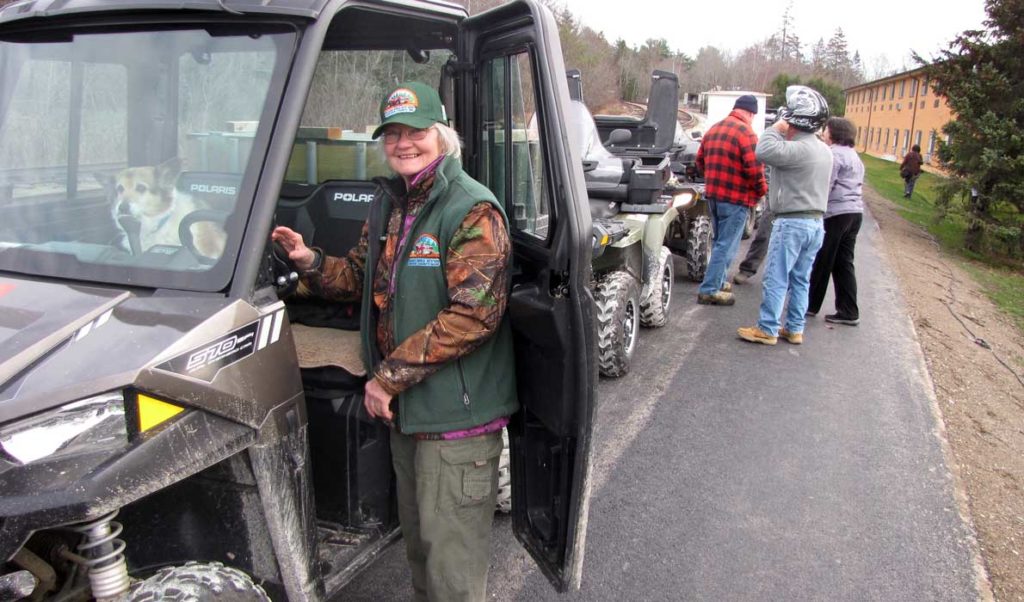 Muggsy Britts and her dog prepare to start her ATV. Britts is a member of the Acadia Area ATV club.