Henry James famously wrote “Summer afternoon—summer afternoon; to me those have always been the two most beautiful words in the English language.”

Summer afternoon. Out in the garden, the peach trees laden with ripe fruit, about to fall off, or turn into a blob of mold. Yes, you can grow peaches in Maine if you have Reliant or Red Havens, and live on an island where winter temperatures are somewhat moderated by the surrounding water.

I stand in the midst of the tree and smell nothing but peach, and the kitchen table is overflowing with bowls and pans of peaches. Some have a few soft spots, and earwigs crawling out of the pits. A cloud of fruit flies hover. I scald the fruit and slip their peels off, cut them in quarters and slide them gently into pint jars. In January, when I open the jars, I smell a summer afternoon.

Summer afternoon: The Sewing Circle Fair is tomorrow, and we island ladies have spent the morning unpacking dozens of plastic tubs of socks and scrubbies, napkins and placemats, stuffed toys and bales of pillows. Now we are in our kitchens making egg salad and ham and cheese sandwiches for the luncheon part of tomorrow’s fair.

We are baking pies, bread, cookies and the bravest of all of us are making fudge. A summer afternoon in August can be hot and muggy, not prime weather for making fudge which can become granular or refuse to set solidly at all. (Oh, fudge, I just made chocolate sauce again.) Some people have an unerring knack for fudge; we hope they will make a double batch because our public seems to have an insatiable appetite for the stuff.

Tomorrow afternoon, the fair will be over. The White Elephants will be half price, or even “best offer,” and any remaining cakes or cookies will be marked down, too. Anything at all, just so we don’t have to pack it all up again and take it home or back to the Circle building, because we exhausted women who have been on our feet since early morning have little interest in spending the rest of a summer afternoon hauling, lugging and stowing any more than we absolutely have to.

Summer afternoon: Islanders finish up cleaning or landscaping jobs, or prepping dinners for summer folk, and go home to pull a clean white shirt out of the dryer, maybe even iron it, find the neat black pants or skirt, shower and dress and head back out for a long evening of passing hors d’oeuvres, waiting on table, mixing drinks, cleaning up after the party. Maybe there was time for iced tea or a beer, while perched on the back steps for a few moments.

Summer afternoon: I’m hot and sticky, and have a couple of deer fly bites that itch. I spent the morning in the garden while it was relatively cool, and am covered with dust from hilling potatoes and corn. I fantasize about spending the afternoon in an Adirondack chair (which I don’t own) with a view of the bay (which I don’t have) reading a novel and letting myself drift off to sleep.

But afternoon is for work indoors where it is cool, where the house needs tidying and cleaning, and there’s laundry to run, dishes to wash and deadlines to meet. All winter long I wonder how I will make the time next summer for planting and harvesting, painting the south end of the barn and scrounging for a few Ben Franklins. Now it’s summer and my neighbors and I observe that it doesn’t involve lawn chairs, views and novels.

Summer afternoon: Let’s try for a very late summer afternoon, closer to the equinox, after the hubbub of July and August. Let’s hunt for a place where there are waves surging and swirling up against rocks, turning green, white, then darkening again. How restorative to watch, for just an hour, sea water heaving as if the shore is breathing in and out. Better sit down and enjoy this summer afternoon because winter is going to be next week and there is still wood to stack, potatoes to dig and apples to gather. 

Sandy Oliver is a food historian who lives, cooks and writes on Islesboro. 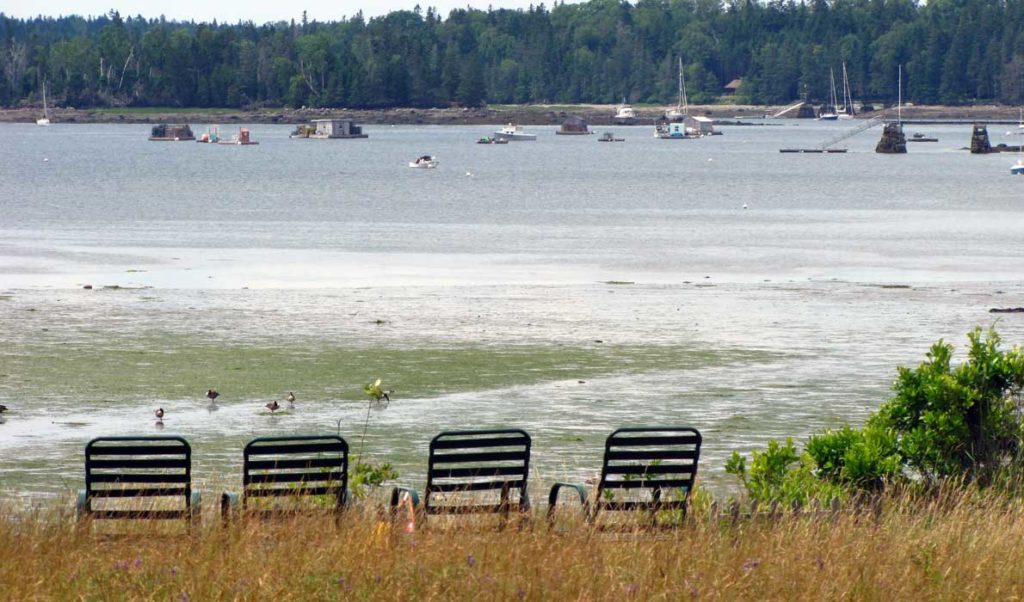