Obadiah Buell grew up on an abandoned industrial granite quarry dating back to the 1800s.

Surrounded by massive stone blocks and the clear waters of granite pools, Buell has had a passion for granite—both for its utilitarian nature and sculptural qualities—since he was a child.

In his 20s, he explored other parts of the world. But in 2005, he had the opportunity to buy part of the quarry in the Hancock County town of Sullivan where he grew up.

Since then, he’s been building a business—Stone Designs Inc. and the Granite Garden Gallery—that includes sales of his stonework, classes and demonstrations, artist residencies and a gallery.

Now, with his partner Kelly Dean, he’s aiming to develop a “living quarry museum” that promotes the reclamation and regeneration of the site, open to visitors eager to learn about the historic quarry industry and Buell’s own stonework.

A drive up Whales Back Road—with whimsical granite sculptures sited here and there, some angular, others curvy—leads to an industrious operation mainly housed in a cluster of cabins made of pipe frame and heavy-duty tarpaulin, with small cedar-shake and plywood shacks tucked here and there. An old Airstream camper serves as the office.

Buell emerges from the cluster with a big smile. A warm personality, he’s on a mission that’s about welcoming visitors to enjoy the gallery, hike the trails he’s established to highlight the old quarry and tailing piles, and view his operation.

“There was some real earth-moving that happened here at one time,” he said. “And now we see the way nature is growing over what’s really an old industrial site.”

Dave made fireworks with his business Star Flight Pyrotechnics. The parents and their three children lived something of a “beatnik” life—homeschooling, traveling by van, living summers in Sullivan and winters in Florida. When he got older, Buell helped his father make fireworks in Maine and Florida.

“But the quarry was always here,” he said. “It was always an influence.”

Dave also sold raw granite and did some sculpting.

“He loved making stone steps, and he did some whimsical stuff,” Buell said. “He was a poet and musician. My mother made stone sculptures, too, although not as many. She was a calligrapher and a painter.”

Buell and his mother started the gallery, exhibiting local artists’ work, including their own. He was 20 when she passed away. Buell spent six years working at a farm school in western Massachusetts, and also traveled. He studied Maori bone and jade carving in New Zealand and amber carving in Mexico. In Gambia, he discovered tribal-ancestral woodcarvings, and in Ireland, explored the sites of ancient megalithic structures. 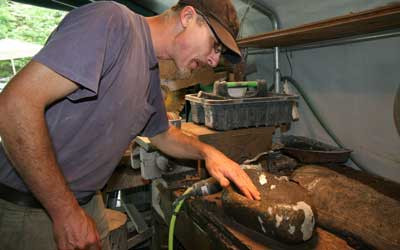 His studies reinforced his self-taught stoneworking skills. So when the opportunity to buy 11 acres of the old homestead arose, he went for it. The enterprise has steadily evolved. On a recent day, he had over 200 orders to fill. Products ship across the nation. And stock flies off the gallery shelves, ranging from finely wrought vases, to birdbaths and leaf-and-vine garden carvings, to massive monuments.

There are lamp bases made from smoothly polished river rocks, candle-holders, pendants and buttons. Oval stones mounted on thin steel bars produce an eerie sound when clicked together. A dancing lady—oval head, swoopy arms and dress—is a whimsical vision.

“Not necessarily,” said Buell. “I’m trying to keep big machinery out of it.” Buell uses angle grinders, Dremel tools, drill press, tablesaw and the like. “I keep it lightweight. Many of the tools transfer over from woodworking.” (And he’s seeking skilled employees.)

Buell and Dean call the work “upcycling.” He uses stone left at quarries here and elsewhere, plus remnants such as countertops, and river stones. They just returned from southern Maine with a truckload of remnants from a quarry in Wells.

Inside his studio, he routed the center of a gray stone that will become a birdbath. Now he’s polishing the interior, a surprising ebony hue.

“You never really know what’s going to be in there, so it’s a real exploration in geology,” he said. “This one has some really cool stuff coming out.” He points to a subtle ring around the rim, and a network of nature’s etchings within. “We refer to that pattern as Crowsfoot”—a type of schist. “You can see some of the sparkle coming out of it.” 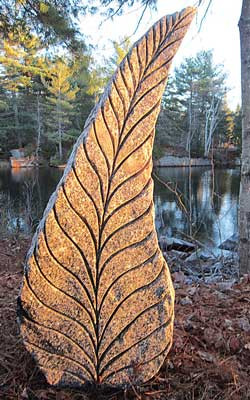 Buell used to do a bunch of shows and galleries, but these days, word-of-mouth and the website (stonedesignss.com) is attracting plenty of work. Plus, customers tend to be loyal. Some clients go back 25 years, to when Buell and his mother were running the gallery.

In fact, here comes one family, heading to their car from the gallery. They stop to say hello to Buell and Dean.

“We’re doing an interview,” Buell tells them. “Would you like to say something about us?”

The father laughs. “What’s the last wedding where we didn’t give something from here?”  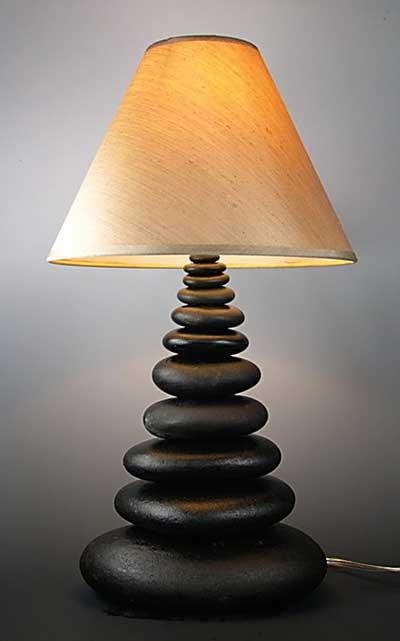 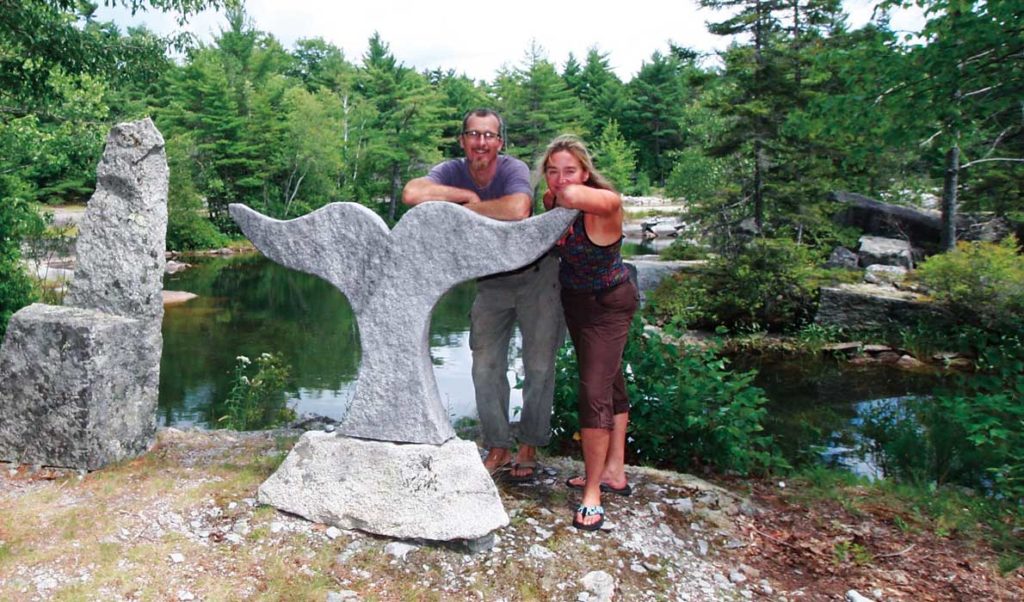