Municipalities have power to control their own destinies. That was one theme to emerge from the Maine Broadband Coalition’s May 31 conference at Thomas College in Waterville.

The conference drew representatives from communities around the state hoping to improve internet speed to match 21st century uses of the web.

One of the most dramatic examples of a community taking control of its internet fate was explained by Julie Jordan, director of the nonprofit Downeast Economic Development, which has worked with Calais and Baileyville in eastern Washington County.

Municipal governments in both Calais and Baileyville endorsed the plan, and the new utility committed to providing fiber optic lines to every home and business in the two communities. The utility will own the fiber, which allows for much faster speeds than copper or cable.

The plan includes bringing fiber to 97 percent of the premises in each community; the remaining 3 outlying percent will be completed when the revenue streams being to support those additional costs, Jordan said.

The plan also commits to providing what’s known as open access to the fiber, meaning that any internet provider can lease it from the utility to serve customers. Revenue from those leases will help pay off the debt of the construction.

Jordan said her group explored other ways to pay off the considerable costs of the project, including the approximately $1 million in fees to attach the lines to the more than 2,000 existing poles.

Among the options considered were grants, but none were awarded. Revenue bonds were possible through USDA, but the process of applying would be long. The towns could issue general obligation bonds, and boards from both Calais and Baileyville voted to do so, but Jordan approached a local bank instead of the municipal bond bank and found a willing lender.

A line of credit at 1.99 percent will be refinanced after the construction is complete, she said.

Other speakers spoke of the viability of a municipal-owned system.

Stephenie MacLagen, a community development officer with the Island Institute (publisher of The Working Waterfront), described the steps the town of Cranberry Isles followed, building its own broadband network.

Voters approved borrowing up $1.3 million to building the network, then the town learned it had won a USDA grant for that amount.

Support for the project was built by framing it around the community identity, MacLagen said.

Thomas Kittredge, economic development director for Belfast, is working to improve internet options in the city.

“We certainly view it as a utility level service like sewer, water, and electricity,” he said. The city may consider a municipal-owned network, he said.

Several speakers stressed the importance of broadband for community vitality.

“Having high-speed connectivity is not going to guarantee you economic success,” said Mike Wilson of the Northern Forest Center, which works in northern Maine, New Hampshire, Vermont, and New York, “but not having it will guarantee you will not succeed.”

He also said those working to bring broadband to their community should not focus on the technology, but rather answer the question, “Why do we want to be connected?”

Mark Axiom of Axiom Technologies, the firm hired by the Cranberry Isles to build the broadband, said the effort required to persuade residents to support a project is substantial.

“This has to be a major priority,” he said. If it seems like yet another economic development project, “You’re not going to get anywhere.”

Independent Sen. Angus King spoke briefly at the conference, and noted that improving access to broadband topped a list of issues he spoke about earlier in the day, announcing his reelection bid.

“No one’s going to buy a house in Milo, Maine if the realtor tells you, ‘Oh, by the way, you’ll never have broadband internet,’” he said.

King likened the broadband effort to rural electrification of the 1930s.

“It’s got to be a broad-based coalition of private, public, federal, state, local,” though he admitted “the federal response has got to be stronger.”

Using bonding to pay for new networks is a logical strategy, Kind said, just as it is used for building roads and other infrastructure.

How fast is fast?

The standard for broadband at the federal level is 25 megabits per second (mbps) download and 3 mbps upload. The standard at the state level is 10 mbps up and down.

The average speed of broadband in the U.S. in 2014 was 30/10. The Island Institute hopes to see 120 of Maine’s island and coastal communities have access to broadband, providing speeds equal to or greater than that national average of 30/10 mbps. 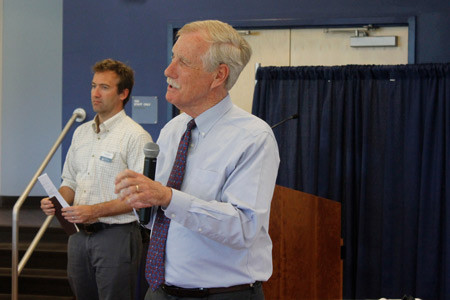 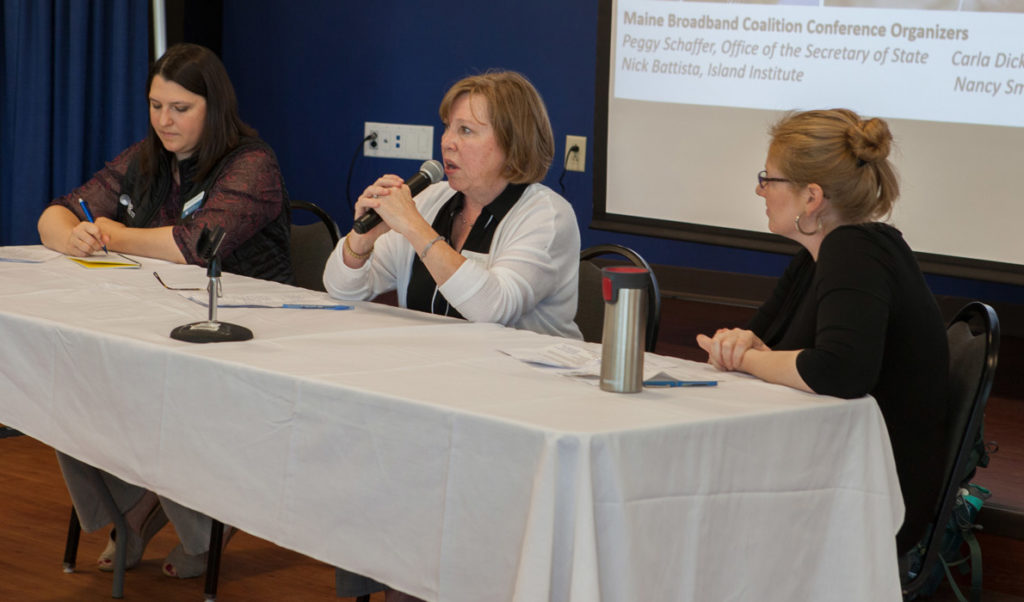