When lobster scientist Diane Cowan heard that friends planned to airlift a box of goodies to her on Friendship Long Island, where she’s been stranded since Jan. 30 due to extreme ice conditions, she broke into laughter.

“I thought it was hilarious,” said Cowan in a cellphone interview from the island off the Knox County town of Friendship. “I never conceived of such a thing.”

Contrary to what some people have thought since news of the air-drop spread across the globe, the 54-year old scientist isn’t anxiously awaiting rescue from the ice-locked island. Instead, she’s there by choice.

“This is really where my life is,” said Cowan. “I’m right where I’m supposed to be.”

For the past 16 years, Cowan has lived on the island year-round, conducting lobster research. Cowan is the executive director and senior scientist of The Lobster Conservancy, which she founded in 1996.

“I’m a field scientist. I’m supposed to be out in nature,” said Cowan. “I’m doing a census of juvenile lobster. I go to their nursery habitat and count them. I spy on lobsters to see what they’re doing. I have everything I need here to do my work. I have my data and papers. I have the phone and the Internet.”

Cowan and her canine companion, Sula, live in a small house on the island heated by a woodstove and solar panels. She hauls their water from a dug well.

Though she’s exactly where she wants to be, Cowan admitted that her life there has definitely been more challenging than usual this winter because of the record amount of snow and the severe cold spells.

“If I knew that we were going to get this much snow, I would have dug a larger opening for my well,” she said. “I have to wear snow shoes everywhere.”

Cowan usually travels to the Fishermen’s Heritage Lobster Cooperative dock in her 21-foot motorized skiff, about every 2 weeks, to get fresh groceries. That hasn’t been possible since the harbor froze over in January.

“I usually go once every two weeks to get a gallon of milk, eggs and some lettuce,” she said.

Several weeks ago, Friendship artist Pam Cabanas contacted Cowan to say that she and some friends would be flying over local harbors to check out the ice. That’s when Cabanas told Cowan she was planning to get together a care package and to see if they could drop it from the plane.

“I had just spoken with Cowan and she told me that she was down to her last cup of coffee,” said Cabanas.

When she arrived at the Knox County Regional Airport in Owls Head on Feb. 24, Cabanas said there was so much snow that she couldn’t even see the rod signs. 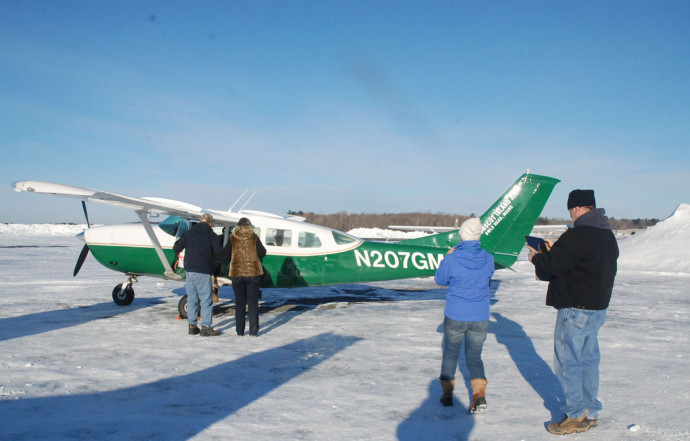 Readying for take off.

“It was minus-12 degrees and there were massive piles of snow,” she said. “I had to call for someone to escort me into the airport.”

Once inside the airport, Cabanas said she had to divide the package into two, because the first was too large to fit through the airplane window. The packages contained coffee, creamer, sausage, oranges, a Milky Way bar and a can of dog food for Sula.

Pilot Tomas Sowles of Penobscot Island Air, Cabanas, and four other friends flew over a number of islands, including Long Island, surveying the ice.

“It was incredible,” said Cabanas.

Cowan watched with anticipation as she saw the aircraft approaching.  It was her first contact with the outside world, other than by phone and Internet, in about a month. She was excited to see two packages come flying through the air. The first bounced off the roof of a building before it hit the ground and the other dropped in the snow.

Cowan is quick to explain that she wasn’t desperate for food but said the packages certainly lifted her spirits.

“I usually store up about two months worth of food for winter, but next year I’ll set aside enough food for at least three months,” she said.

Cowan hopes the warm March sun will help the ice to thaw, but she isn’t counting on it.

“This week I had high hopes,” she said in early March. “It’s nice out, but then it’s supposed to get cold.”

Cowan has noticed the seagulls, eider ducks and other water birds have disappeared from the island this winter.

“They’ve gone somewhere else where there is no ice,” she said. 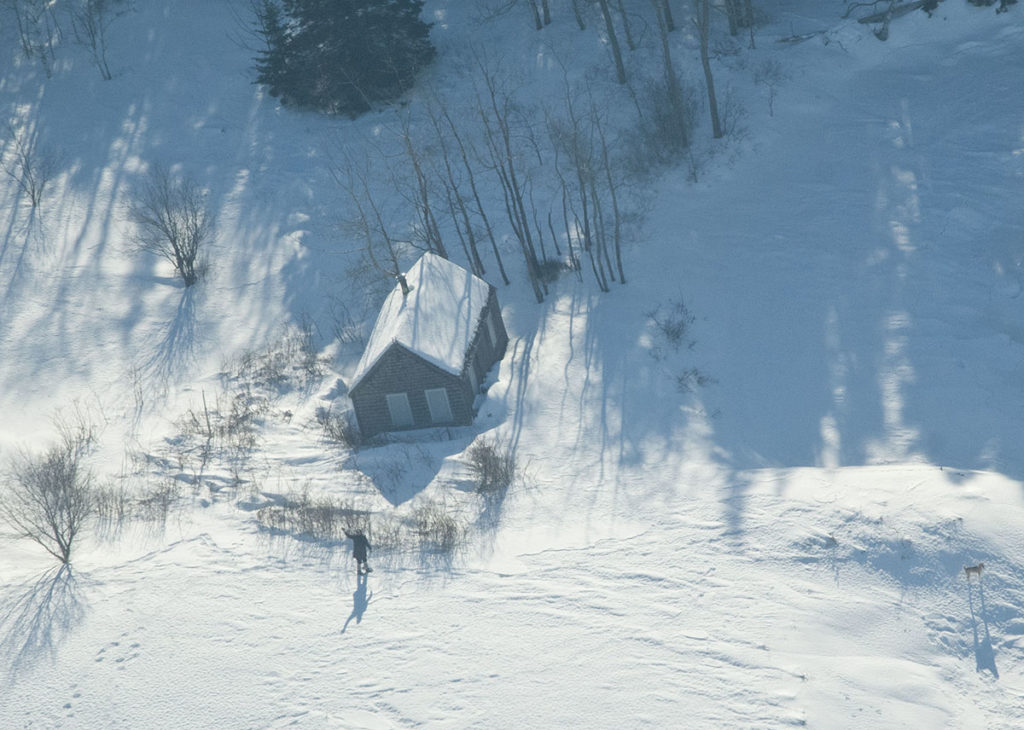