The challenges of living on an island are many, but for an island artist, there is one more: getting your work recognized off-island. But a shop and gallery on the mainland has made it its mission to help island artists—and Maine’s mainland artists, too—earn a living from their art.

Archipelago, the retail arm of the Island Institute, the nonprofit that publishes The Working Waterfront, was born 15 years ago with the aim of providing a mainland venue for island artists. In the years since, that mission has expanded to include all Maine artists and to offer programming to those artists that will help them grow and manage their businesses, said Archipelago’s manager, Lisa Mossel Vietze.

“Our aspirational goal is to play a pivotal role in Rockland’s emergence as a center of arts and culture as well as become a prominent element of Maine’s creative economy,” she said. “We see it—the shop and gallery and Archipelago’s programs—as a great way to support economic development and diversification in the state along the coast.”

“The more artists we have that can make a living wage at what they do the better off we all are going to be,” she said.  “These kinds of stores are great for just the average person and the 20 million tourists who come through Maine. They have an opportunity to take a piece of authentic Maine back with them by purchasing art and jewelry and signed craft from these wonderful centers.”

Without Archipelago, or shops like it, those tourists would have limited access to the work of island artists, and those artists would likewise not have the wider audience found on the mainland.

Archipelago has done a lot for island artists, said Martha Morris-Gibson, who lives and makes traditional, Shaker-style baskets on Peaks Island. She has had her work at Archipelago since the venue opened.

“A small city like Rockland is very popular. A lot of different people see our work,” she said. “They have a different clientele than we do out here on the island.”

Since Archipelago opened in 2000, it has helped more than 800 Maine artists earn an estimated $2 million collectively, Mossel Vietze said.

Artists get 60 percent of sales if the work is in the gallery or on consignment in the retail shop and Archipelago gets 40 percent, which goes back into programming, she said. Wholesale purchases are 50/50.

But earning income by selling work at Archipelago is just one benefit for artists.

Beyond a wider exposure to potential sales, an association with Archipelago can lead to other shops and galleries picking up your work, as it did for one basket making friend of hers, Morris-Gibson noted.

And there’s also the gratification of a cooperative business relationship, said potter Richard Robertson and polymer clay jewelry artist Jayne Dwyer, who both have worked with Archipelago from its inception.

“It’ll take you a number of years to find the people that you really want to do business with to the extent that you would rather not lose them and you realize they feel the same way about you,” said Robertson, owner of Rockport Pottery. That’s the sort of relationship he has with Archipelago, he said.

“This sounds corny, but really, it’s helped me grow as a person,” said Dwyer, owner of Paper Moon Jewelry in Newcastle, of her business relationship with Archipelago. “I appreciate the honest and upfront way they deal with me as a business person. We’ve worked together to make it a better situation for both of us.”

Archipelago is celebrating the artists it works with and its 15 years in operation with a big party during Maine Craft Weekend, which runs Oct. 2-4. A specific date has not been set yet, and other anniversary events are in the works. Keep checking http://www.thearchipelago.net for updates and gallery exhibits. 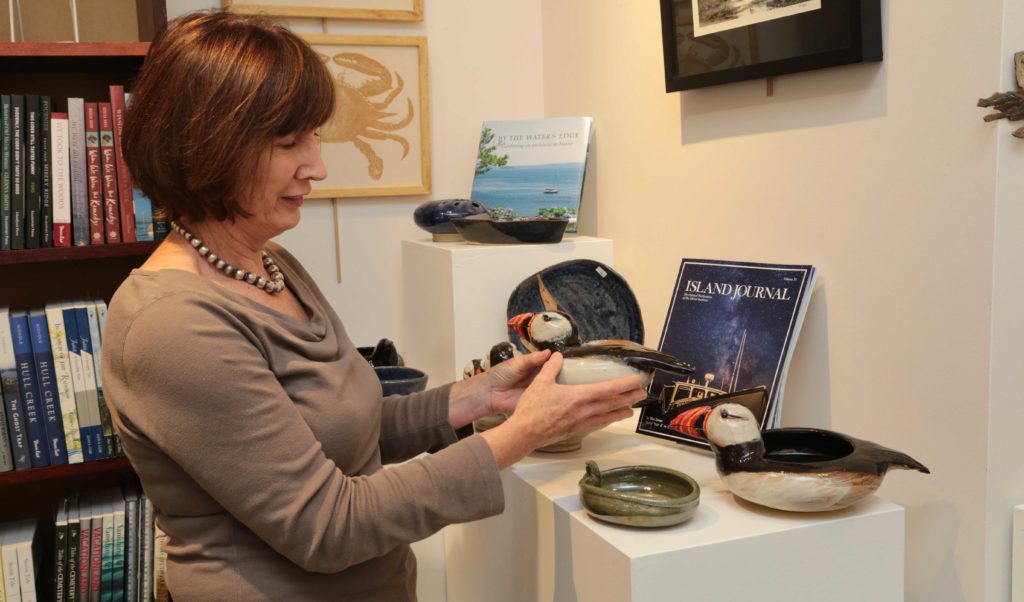