A pending project to revitalize Stonington’s Hagen Wharf is expected to boost a waterfront attraction central to the town’s transient boater and tourist economy.

Located downtown, Hagen Wharf comprises a granite pier with a ramp down to several floats, with some public parking. It’s home to the community’s Stonecutter Statue, which memorializes the region’s history as a prime source of the nation’s granite.

Transient boaters and windjammer tourists often come in over the dock, heading into town for shopping, dining and the nearby ice cream shop. It’s a popular place to park and enjoy the view of the area’s thriving fishing fleet of about 450 lobster boats, which in 2014 pulled in $60 million worth of crustaceans, the state’s highest-earning lobster port by far, employing about 38 percent of the local labor force. Opposite Hagen Wharf is the town’s commercial fish pier, where half a dozen or so seafood dealers show up in trucks to buy crates full of lobster.

“We’re heavily dependent on the lobster industry,” Town Manager Kathleen Billings says. “It supports a lot of business, whether it’s bait, fuel, fishing supplies, whatever. And we depend on Route 15 for getting everything off. My house is on 15, and I can’t tell you how many tractor-trailers haul lobster off all night long, and haul bait on. Everybody here is very supportive of the fishing industry.”

That support is seen in the fish pier’s relatively good condition.

“That’s in good shape. We keep up on that,” says Billings. “We need a lot of space in this area for the working waterfront. If anything, we need an expansion on that. But that’s a project for another time.”

Hagen, by contrast, is in poor repair and needs immediate upgrade. The structure goes back at least to the early 1900s, when it was a way station for quarry stone. Up through the mid-1900s, it was gradually filled and expanded for parking and building development.

Today, major problems include damaged retaining walls, poor drainage, granite supports that appear to have shifted, and surfaces that have been worn down and undercut by storm and wave action—a problem expected to worsen with climate change. Other problems include inadequate parking and unusable parking due to holes in the pavement, a deteriorated sewer line, and corroded electrical conduits.

Currently, the town is in the planning and design phase with Andrew McCullough Engineering in Ellsworth. The town and other interests hope to incorporate a walkway and small green spaces around the wharf, and to reconfigure it to add more parking, if possible without costing too much.

The project is expected to cost $1 million. At their town meeting in March, voters approved an article to borrow up to $500,000. The town received a Community Development Block Grant of $300,000 from the state. The town also has reserves funds that will go toward the project.

Construction could start in spring, with a break in summer, then start up again in the fall.

Accomplishing the project will involve a fair amount of strategy, says Billings. The plan is to avoid work during the summer, when tourists are in town. That leaves spring and fall, and winter when the weather is good. But there’s still the tide to work around.

“The only time water doesn’t come up to the dock is when it’s low tide, and the tide shifts around,” says Billings. “It will be nice once it’s done. It will certainly be a lot more solid. It’s been tough with some of these more intense storms. A couple of years ago, a couple of storms washed up on the pavement, raised it up, and created more sinkholes. We’ve closed a corner off with Jersey barriers. We’ve definitely got to do something.”

Overall, dinghy floats and access ramps are subject to rising and twisting with extreme high tides and storm surges, says the report.

“We’ll have to deal with that down the road,” says Billings. “Our working waterfront is everything to us here. We’re trying to keep our authentic fishing town going.” 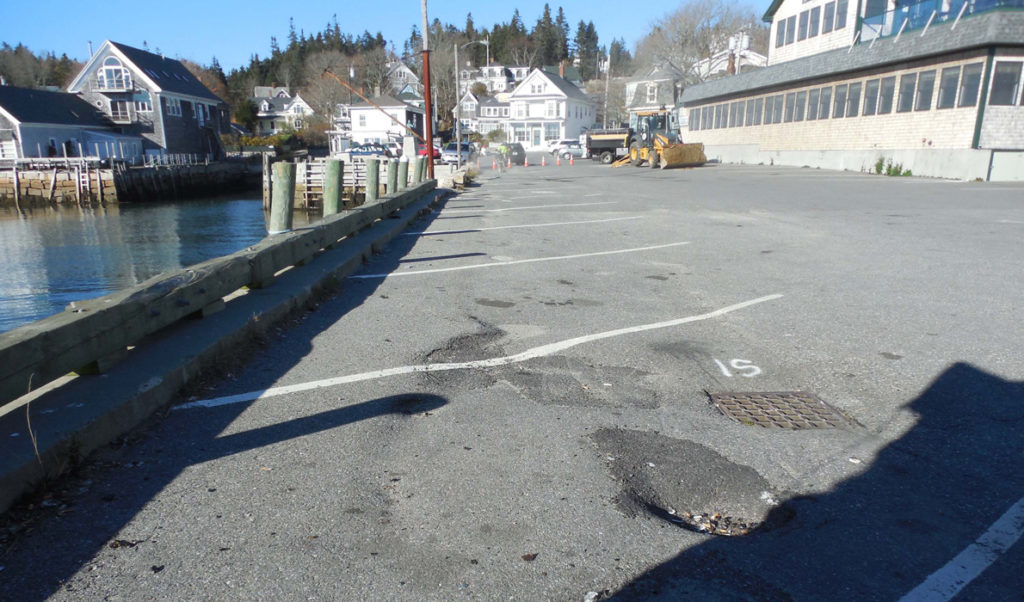 Sink holes are visible in this photo