Maine’s top lobster landing port each year is Stonington, and according to the Island Ad-Vantages newspaper, the value of landings in 2014 exceeded the previous year by $11 million, hitting a total value of $60 million.

The port saw five million more pounds of lobster landed than in 2013.

Given the big catches and high prices of the summer of 2015, it’s a safe bet the numbers will be even higher next time. NOAA—the National Oceanographic and Atmospheric Administration—reported the numbers this fall.

Stonington was 18th in the nation for the dollar value of landings of all fish among U.S. ports.

Maine Fair Trade Lobster in Gouldboro hopes to add 75 jobs as it expands its production capacity, the Ellsworth American reports.

The company is a joint venture by Garbo Lobster and East Coast Seafood.

Total employment would grow from 150 to as many as 225. The growth would also mean adding more employee housing.

Blue Hill’s Weekly Packet reports that the village of Brooklin will get sidewalks in the small commercial area near the school.

The school principal said the intersection of Naskeag Point Road and the Reach and Bay roads “is essentially the center of town and is problematic due to the wide swath of paved area and frequent traffic,” according to the paper.

Brooklin is home to Wooden Boat magazine and boatbuilding school, which is located south of the intersection.

The Mount Desert Islander featured a profile of Swan’s Island’s Lesley and Leah Ranquist, “sisters in their early 20s, [who] were first introduced to fishing when they were mere kindergarteners. Now they are among the 4 percent of women currently holding commercial fishing licenses in the state of Maine,” the paper notes.

“Twenty-three-year-old Leah captains her own boat, a 32-foot North Shore, while Lesley, 16 months older, shares her slightly larger 36-foot Osmond Beal with her father, Les Ranquist,” according to the story.

“Turmoil” is the word the Quoddy Tides newspaper of Eastport uses to describe the state of the Passamaquoddy tribal government.

Efforts are underway to recall the tribe’s vice chief and a tribal councilor, the paper reports, and there are allegations of “bullying and intimidation by supporters of the chief.”

The three-story brick building is in the heart of the city, and served as its high school and later junior high. In the mid-1990s, the New York-based National Theatre Workshop of the Handicapped purchased the building from the city and invested in renovating it, adding performance spaces and dorm-like facilities. The theater group stopped using the building several years ago.

From the Stonington Island Ad-Vantages comes an unusual response to a crime in a letter to the editor: “In general, breaking into a boat is viewed much as a home invasion… Breaking into a boat in Stonington, however, is an order of magnitude more serious. And more dangerous.”
The writer explains that his boat was burglarized, and as a 67-year resident of Deer Isle, “I know that while perhaps opportunistic, this event was likely neither random nor anonymous.” He concludes with an appeal for information about the culprit, offering to donate to a charity of the tipster’s choice.

“I would dearly like to have the opportunity to have a conversation with the culprit(s) before he makes a real serious mistake and breaks into your boat. I’m sure I can be very convincing in pointing out the error of his (or their) ways.” 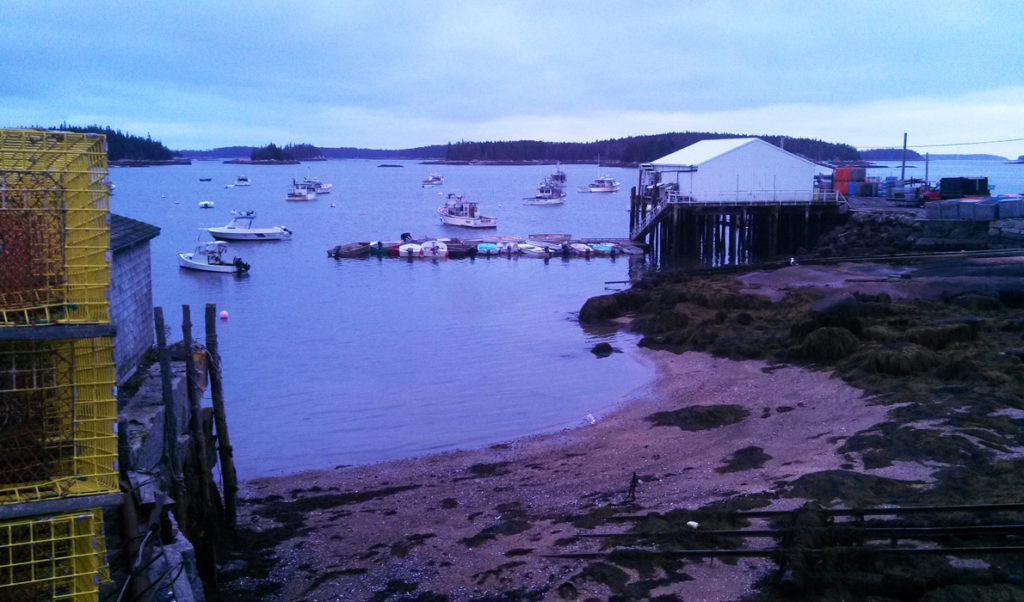 The November light at dusk brings out unusual colors on this Stonington shore.