It had two prominent holes that looked like eyes, making the seat look like an owl head. Warner called it the Owl Stool and commissioned a 2013 analysis by U.S. Ergonomics, which showed that it supports optimal postural alignment. The concept has been phenomenally successful.

Offered in four-legged and rolling pedestal versions of different heights, close to 5,000 of the stools have been sold around the world. Warner has spun off the stool as a separate division for the shop, which has become a nexus for a cottage industry of over a dozen outside vendors, including Amish companies in Ohio that turn legs for him.

Now Warner is scaling up the business with the development of an injection-molded composite seat, with the choice of steel frame or pedestal, for volume production at a lower cost. Calling it the ErgoPro Owl, Warner envisions a primary market of institutional users such as schools and libraries.

When the pandemic struck and people started working at home, Warner added a one-time residential offer at a 10 percent discount.

“Because of these unusual times and because I want to honor community, we’ll offer the ErgoPro to everybody for a limited amount of time, to support the new work-from-home lifestyle,” he said.

The first production run will likely debut this July.

“We’re on the threshold of a pretty exciting launch,” he said.

Warner started his career inspired by Scandinavian and Eastern influences and has made many types of furniture using sustainably harvested American hardwoods and guided by a personal mission to honor economy, ecology, and community.

“When I started Owl Furniture, I realized I was supporting my mission, which is to create and inspire in a loving way,” he said.

His development of the composite model also honors that mission by making the design more accessible and affordable, he said.

“The only way to do that was to find a way to produce it so it’s 100 percent consistent,” Warner explained. “That meant going to the injection molding process.”

Development of the model began last year, thanks to a $15,000 grant from Maine Technology Institute. Sustainability was paramount.

“It needed to be made from a composite that was 100 percent recycled materials,” he said.

He went to G&G Products LLC in Kennebunk. The company designs and produces specialty molds and thermoplastic injection molded products for niche markets, according to its website. G&G developed an aluminum mold for the owl seat and helped Warner find a Kansas firm called Green Dot Bioplastics, which mixed a composite from  reclaimed polypropylene, wood waste, and fiberglass.

Thinking in terms of a stacking seat, Warner contacted Columbia Tech, an engineering and contract manufacturing firm in Westborough, Mass., to design and produce a four-legged frame that would go under the seat. The next task involved creating an understructure that marries the stacking frame with the molded seat; the understructure also had to work for a pedestal base rolling stool version that Warner envisions for the office market.

Warner commissioned Salem Metal Inc., a metal fabricator in Middleton, Mass., to produce the plates. Next, G&G was on tap to do a second stage of injection molding after an initial trial. The seats will be produced with several color options, including a natural wood hue.

The pedestal base version will debut first, with an initial production run of 100 seats likely ready by July for the work-from-home market. Because of the pandemic, production for institutional use is on hold for now, he said.

“If I’m creating something and I’m inspiring others and I’m doing good in the world, then I’m impassioned,” he said. “It’s more than just growing a business.” 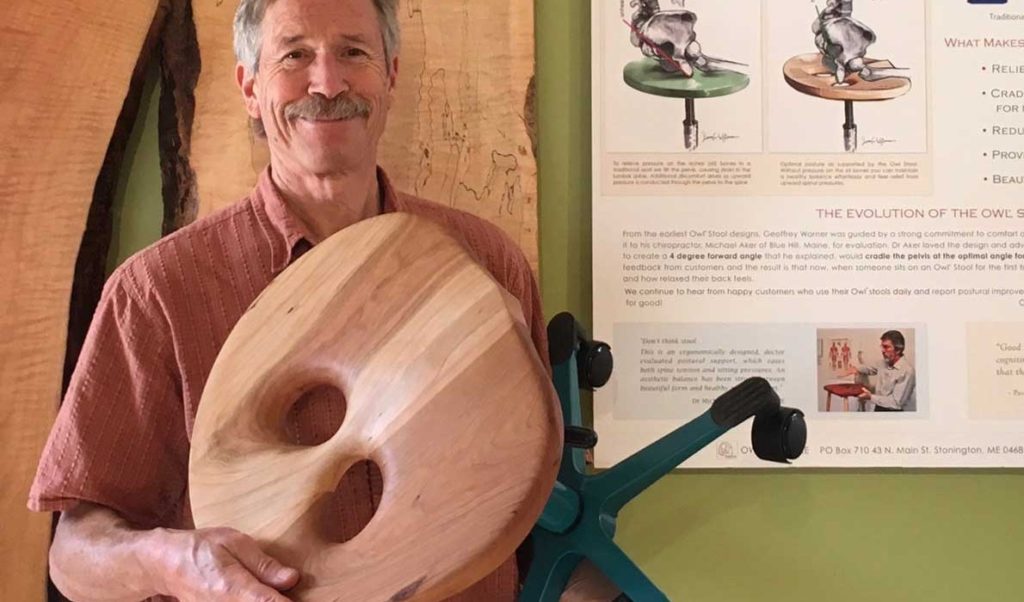