BAR HARBOR — Artist and business owner Sherry Rasmussen remembers, in the 1970s, taking her puppy for a romp at the sand bar off Bar Harbor.

A 20-something traveling by VW van, she was new in town, proudly sporting a pair of L.L. Bean boat shoes. On this nice day, she decided to walk barefoot in the sand. Next thing she knew, her new shoes were floating away.

“I wasn’t used to the tides yet,” she remembered. “So I swam for my shoes. Then I realized my keys to the new home I just bought were underwater.”

Rasmussen mentioned her sad saga to a neighbor across the street, Lou Hersey. At the next low tide, in the middle of the night, Hersey went to the bar with a flashlight and found her keys.

“That’s an example of what a good neighbor he was,” she said.

Rasmussen mentions the anecdote to illustrate the neighborly spirit characteristic of the lower end of West Street, on Bar Harbor’s waterfront. That spirit persists today, even as the once-jumbled mix of homes and businesses evolved with the town’s tourist-oriented economy, she believes.

A significant change came in 2012 with the construction of the four-story, two-block, 85-room West Street Hotel. A room without a view in mid-July goes for $289 a night. Built by Maine-native, now international hotel developer Tom Walsh, it is one in his Bar Harbor portfolio that includes the renovation of the Harborside Hotel & Marina and Stewman’s Lobster Pound, both on West Street, and renovation of the 86-year-old Bar Harbor Club, a social venue. The new construction replaced smaller, old buildings. Many say the changes are for the better.

Rasmussen and her husband, Ivan—also a 1970s, VW van arrival and artist—are now the street’s long-termers.

“People will say, ‘Oh, I loved those little buildings. They were so quaint,'” says Sherry. “But the buildings were in bad shape. Some didn’t have running water.” 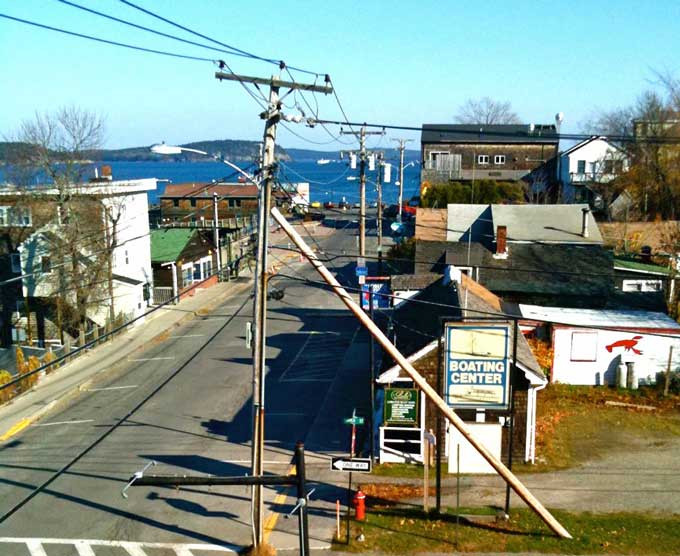 But Sturgis Turnbull is a resident and business owner who misses the old ambience. Starting in the 1980s, Turnbull ran a tourboat, Aunt Elsie, from the Golden Anchor Inn, the business bulldozed to make way for the Harborside. The enclave thrived with tour boats. The Doghouse sold hotdogs and sandwiches; sometimes Turnbull brought in lobsters, which The Doghouse boiled for his passengers.

“I liked it a lot better than it is now,” he said. “Now we have a huge hotel, which is sort of a citified thing. West Street was kind of bedraggled, but it had more character than it does now. It was ‘Downeast Maine.'”

Half of West Street, less than a mile long, comprises mansions going back two centuries and today listed on the National Register of Historic Places. The lower end, with a lower-income history and once called “Peanut Row,” was likely developed to provide worker housing for summer businesses, according to the Bar Harbor Historical Society.

“The neighborhood was considered the closest thing in Bar Harbor to an urban slum,” according to its newsletter. Early-1900s fires destroyed a number of buildings. An industrial landscape—a coal company and town dump—prevailed in the 1920s.

Transformation began after 1947, when fire destroyed much of Bar Harbor. According to the historical society, development of the Golden Anchor, a joint venture by local businessmen, was key to improvement. As the town grew as a tourist destination, many say, change was inevitable.

Bob Bond, a longtime contractor and part-owner of a restaurant on West Street, said the hotel extended tourism-oriented commercialization of the town’s main drags—Main and Cottage streets—onto West Street.

“It’s a little glitzier, a little snazzier than Bar Harbor is accustomed to having,” he admitted, but added that new construction here is attractive, and developments elsewhere in town have extended commercialization as well. The benefits include a larger tax base and increased foot traffic that boosts the town’s many small businesses, Bond believes.

Ivan Rasmussen recalls West Street in the ’70s was pretty rough. But then, he says, so was much of Bar Harbor—more biker-bar and less tourist. Property was more affordable; that’s how Sherry bought the couple’s West Street building, which goes back at least to Prohibition, when Lou Hersey and his brother operated a trucking business there.

“The big changes came in the ’80s,” Ivan says. “There was a lot of speculation, and real estate prices were going up. People were buying buildings and sticking what they could in them to make the mortgage.”

Bar Harbor native and entrepreneur Bobbie Lynn Hutchins fondly recalls, in the ‘70s, going to Mitchell’s, a restaurant that is now the West Street Cafe, to get “the best fried clams anywhere.” The neighborhood had a certain familiarity.

“There is a certain sadness in seeing that stretch of buildings gone,” said Hutchins. “It was one of the last charming, rustic examples of the Bar Harbor of my youth. But most of those structures were in pretty rough shape and it was inevitable that someone would eventually replace them.”

Chris Coston, who bought Mitchell’s in 1980 and reopened it as the West Street Café, recalls the street’s quiet.

“In August, you could walk by the Quarterdeck or Geddy’s”—on Main Street—”and the streets were packed. You could walk to West Street and there wasn’t anybody. The Bar Harbor Club was closed for years and became dilapidated. There were raccoons in there. So times have changed,” he added. “West Street is busy now. Every town needs growth.”