The “Quiet Side” of Mount Desert Island engenders devotion by the people who live there.

That’s the case of four Southwest Harbor businessmen who are seeking to enhance the community’s well-being and provide economic stimulus through the creation of the Village Green Arts Association, aimed at creating arts, music and education programming and revitalizing an underutilized commercial area behind Main Street.

Phil Steel is an architect and artist, and the long-time owner, with his wife Joan, of the Salty Dog Gallery. Kevin Buck is a contractor who owns, with his wife Marjory, the former Island Watch bed-and-breakfast. Jim Gray is a real estate agent and musician. Jim Mitchell is the owner of the newly opened restaurant/music venue Coda.

The plan also creates a network of existing venues that would come under the association’s umbrella. Together, the nonprofit and for-profit venues will develop a unified arts district and marketing message that will bring in talent ranging from local to world-class, thus enhancing the area’s attractions for visitors and locals alike. Improvements to existing hardscaping and open-air spaces, in and around the underutilized area, would enhance the plan’s pedestrian-friendly nature.

The plan has been quietly underway for two years.

“This winter and spring, we held a series of events to make Down East and beyond aware of our purpose,” said Steel. “We are contracting with musicians, artists, and authors over the summer to continue this awareness program. We have a few minor hurdles to overcome, but have donors who want to help us financially.”

The line-up of performances, gallery receptions, and performance has been taking place at the Salty Dog, Coda, the newly renamed Creative Center at Island Watch, a nonprofit eatery called the Common Good, and the local American Legion hall. As of early May, there were six events, some of them sold out. So far, about 20 events are scheduled through the summer. As a result of word-of-mouth and website and social media outreach, the association has already been receiving inquiries from musicians from eastern Canada and along the East Coast, who want to include Southwest Harbor on their tours. The association has also been reaching out to businesses and other partners for their input on the plan.

“There’s a huge demand for this,” said Buck. “It should be a big economic stimulus for the town. And hopefully it will provide year-round employment for the town.”

Steel, the idea man behind the plan, has already had a vibrant mini-arts center going for a number of years at his gallery. Year-round, the Steels have been hosting art receptions and encouraging local artists with workshops and shows. They brought a grand piano into the gallery several years ago, and now host regularly scheduled concerts by a growing slate of musicians. Steel’s commitment to community can also be seen in his multi-media collaborations, with writers and performers, that depict the hard work of fishermen both in Maine and Florida.

Gray and his son perform regularly in the area. Mitchell got his restaurant going as a way to provide a year-round venue for more live music in town. And Buck said he envisions the Creative Center at Island Watch, located on a ridge above town with a view of the harbor, both as a venue and a feeder facility, offering lodging to visiting artists, classrooms, private studios and a digital recording studio. The facility will allow artists, educators, and students to create, teach, study and perform, all the while enjoying Acadia National Park.

As the “Quiet Side” of MDI, Southwest Harbor and neighboring Tremont (wryly called the “Back Side” by those who live there) enjoy all the aesthetic and recreational benefits of abutting Acadia, while also being away from the tourist crowds and traffic that beset Bar Harbor every summer. Over the years, Southwest Harbor’s downtown has become an enclave, on a smaller scale than Bar Harbor’s, of restaurants, galleries, lodgings, specialty retail, and festivals, all while retaining a pedestrian, community feel.

The men said the plan will retain the town’s quiet character while providing economic stimulus and planning for better use of the underutilized area behind the Main Street buildings.

“The whole block is not being used to its potential,” said Buck. “We want to make the block behind there much more attractive, make it a place that people can enjoy, and not just blast through on their way to somewhere else.”

The association (villagegreenarts.org) has launched a campaign to raise $2 million for the purchase of a building and development.

Ultimately, they said, it’s all about community.

“This side of the island is really special,” said Buck. “It has a totally different feel than Bar Harbor does. I think we’ll pull in different crowd. It has a different sense of community than a lot of places do. And we’re just working with that.” 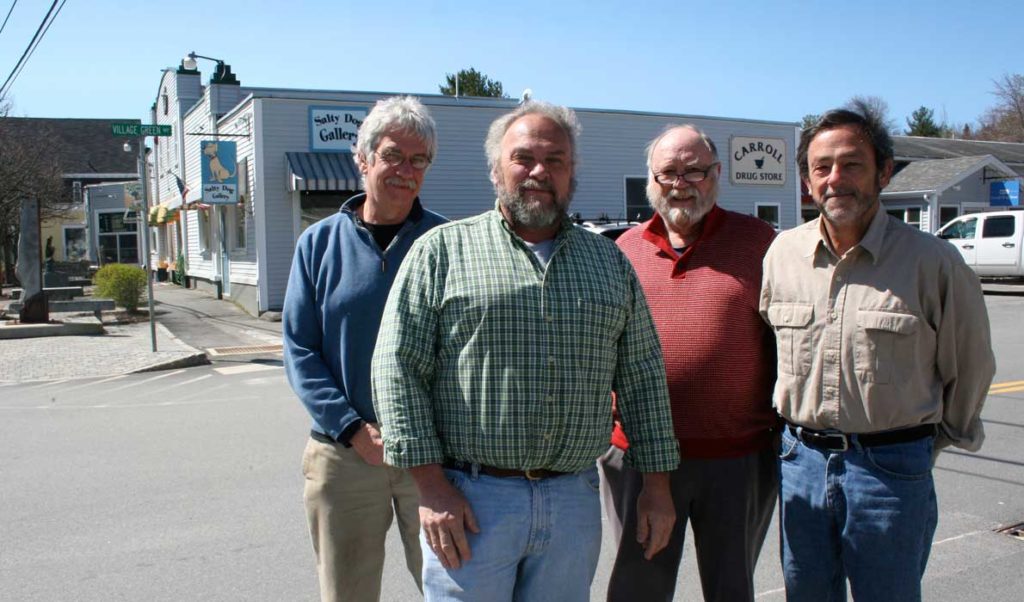