Proposals for South Portland’s Portland Street Pier, a long time overnight station for local fishermen, range from the modest—adding parking spaces and giving the place a facelift—to the ambitious, with a rebuilt and enlarged pier that could lead to an active fish farming program.

A rough estimate of possibilities ranges from $50,000 to $2 million.

The pier in Ferry Village has been owned by the city since the 1800s and was intended for shipbuilding. It is located off Front Street and has a few existing businesses—the Sunset Marina and the Saltwater Grille restaurant—in addition to the slips for fishermen. Portland Pipe Line Corp. has two large fuel tanks in the area.

Currently, 11 of 15 available slips are leased to lobster and tuna fishermen from April until November, bringing in $20,000 to $25,000 each year. The adjacent wood frame building is primarily used for storage.

Assistant City Manager Joshua Reny said the engineering firm GEI Consultants of Portland conducted a structural assessment of the pier and building and concluded the pier and structure are stable, although in need of cosmetic improvements.

Fishermen and members of the public who have a stake in the project are being given the opportunity to express their wishes and dreams for the location.

The study is being conducted with a $30,000 grant from the Maine Coastal Program.

Helping with the planning are scientists with the Gulf of Maine Research Institute (GMRI), who have looked into the possibilities of aquaculture and other fishing in Portland Harbor and the Greater Casco Bay area.

Chris Vonderweidt, GMRI aquaculture program manager, said the objective is to support and preserve the area’s working waterfront as well as potential aquaculture operations, which are a booming industry in the area.

The feedback from interested parties will help the engineers create three potential designs that will focus on whether to rehabilitate or expand the pier and add a wave screen to protect the pier from northeasterly storms.

“We have had listening sessions, reaching out to a lot of owners of different businesses on the waterfront and asking questions about what needs exist,” Reny said.

The city council had a draft needs assessment in hand by early April from the institute as well as the structural assessment conducted by GEI.

Reny said those conducting the assessments were asked to come up with three design alternatives, from the humble to the more expansive.

In the meantime, Reny said there were plans for another meeting in late April or early May with fishermen and others who are interested in what happens with the pier. Those attending will be asked to express their opinion of the three design proposals.

“We’re working toward a presentation to the city council in June,” he said. Reny said the property is not extensive. There are six parking spaces for those using the pier.

“One of the things that will come out in these proposals is how to deal with the parking,” he said, adding that one option might be to extend the size of the pier and allow parking on the pier close to shore.

The fishermen who attended the December 2017 meeting noted that the pier is on the southern side of the harbor and, as such, is exposed to northeasterly winds. Although a breakwater exists, utilizing the pier year-round would be problematic, they said.

City Councilor Claude Morgan, who represents the city on the Portland Harbor Waterfront Alliance, is hoping for a more ambitious plan for the pier, which is visible across the water from the Old Port section of Portland. He said his vision is supported by pier owners on Portland Harbor.

Some fishermen said there is no need for additional boat slips, that the pier is primarily used to dock boats at night while fishermen obtain fuel, bait and ice across the river. They mentioned a need for added security—there is drug activity in the area and some fishermen have had gear stolen from their boats.

Tuna and lobster fisherman Mike Breton said a modest proposal would be more viable. Mussel farmer and former lobsterman Gary Moretti said the group should address what infrastructure is missing and what the future might hold when his “38-foot Youngstown commercial vessel is somebody’s picnic boat.”

Reny said a more ambitious plan would require acquiring more land, which he said is an unknown possibility since the abutting property is in private ownership. 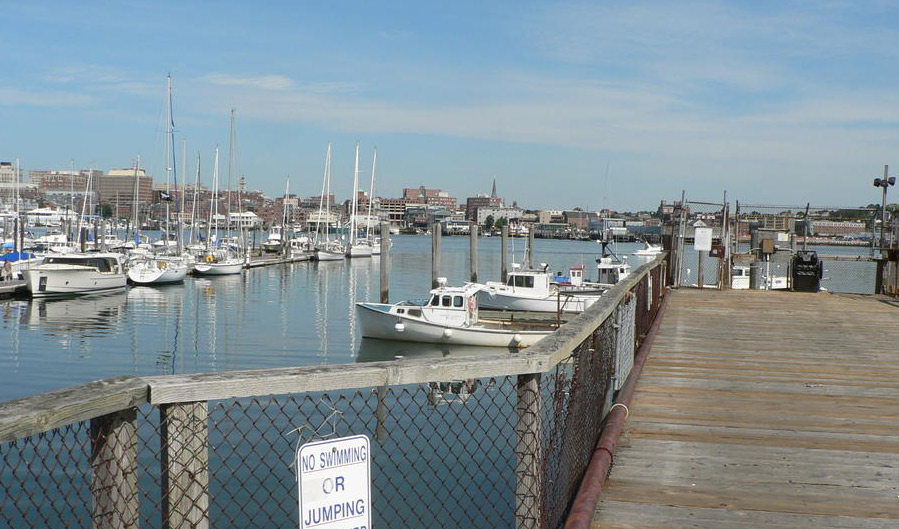