Ian Watkins is an Island Fellow, a participant in a two-year service program operated by AmeriCorps and the Island Institute, doing community development work on islands and remote coastal communities. Watkins works on Deer Isle and the Downeast coast with high school students.

Living on an island, it can be very easy to fall into your routine and daily habits, seemingly unaware of what’s going on outside your immediate island environment.

Compared to other places I’ve lived, it seems to be a custom I’ve most heavily adopted on Deer Isle.

Having the Internet, the world is still theoretically at my fingertips, but observation can be taxing, and being an Island Fellow has refocused my attention to my more daily interactions and routines. Everything else can sometimes seem to be a world away.

One of my routines is volunteering a few hours a week at the island-mentoring center, which is right around the corner from my house. My shifts are during the center’s open hours, meaning some days there are visitors and others not. On days with visitors, a typical activity might include cooking some food, playing cards or just people visiting and having dinner.

For example, during my first shift, I invited a number of students from the high school and we made a big pot of gumbo. During slower shifts, tasks include cleaning, shoveling the front walk, or any number of general upkeep duties to keep the place looking shipshape. With those volunteer duties finished, I might read a book or have some time to play my guitar or fiddle. It was this latter activity that caught the attention of a photographer from the Boston Globe who just happened to be walking though the crossroads village of Sunset, where the mentoring center is located.

When the knock on the door came, I was sitting at the front table that greets guests who enter the center and playing my fiddle. When I opened the door to the frigid evening, a stranger with a much-too-thin coat greeted me. I quickly took note of his car parked across the street—one that I didn’t recognize. Clearly, he wasn’t a local.

We exchanged greetings and I noticed that aside from his unseasonable coat, he was also carrying a camera.

“I saw you playing the fiddle from outside,” he said. I told him that he could take a few shots of me playing if he’d like, and before shutting the door to go inside he asked, “Oh, what do you do?” I did my best to answer, saying all the important key words to a reporter who would have no idea what “Island Fellow” means. “A world away,” I thought to myself as I went back inside to keep playing long enough for a few pictures.

Being cold, it wasn’t long before he gave me an affirmative thumbs up from outside the window and briskly jogged back to his car. I continued to play my fiddle a few more minutes before shutting off the lights, locking the door to the mentor center for the night and promptly returning to my standard routine, forgetting all about the encounter. Several weeks had past before one day my recognizable posture and profile appeared playing a fiddle in a photo essay on Deer Isle and Isle au Haut published by the Boston Globe; a small portion of my daily routine captured and presented a world away.

The photo essay may be viewed here: http://bit.ly/1zFwHHz 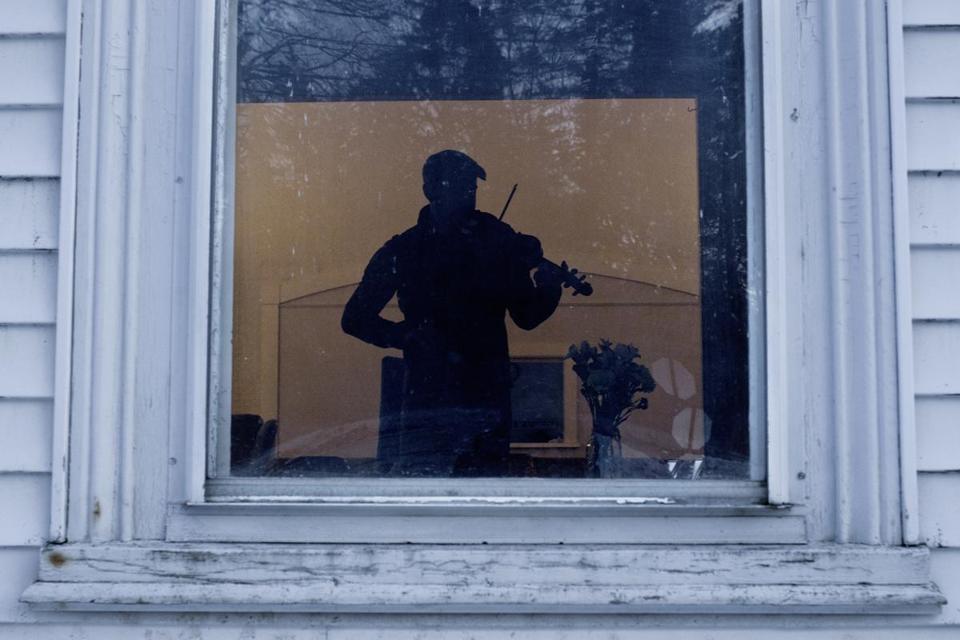