As I write this, I’m sitting on some rocks at the Basin, the tidal pond on Vinalhaven Island. It’s low tide. Rexie my dog is sniffing around the seaweed, looking at me as if to say, “What are we doing?”

I’m getting ready to leave on the next ferry to meet the group of 2017-18 Island Fellows. We will travel to Vinalhaven for a week of orientation. I’ll show them around the island, where my fellowship was based last year, and those of us who have stayed for a second year will tell the new folks about our first year.

I started my position as Fellow in December, so I missed orientation the first time around. I’m looking forward to getting to know the folks who will be in the other communities, to learn about them and their projects. Because I started late, I came with the agreement that I would stay for two years (which will really end up being 1-3/4 years).

The first six months or so were a transition.

Though I grew up in coastal Maine, have lived on an island, and spent most of my adulthood in rural Washington County (an island in its own way), Vinalhaven was still a new place, with new people. I was used to walking around town in Machias, knowing people and having them know me; having something to chat about on those encounters in the grocery store, the gas station. People on Vinalhaven were very welcoming and generous, but it would take time.

This summer, I was busy facilitating summer camps. My host organizations, Partners in Island Education and the Vinalhaven School, were partnering on three enrichment camps—art, theater, and music. I was responsible for registering kids, supporting the instructors, and generally being there to find a Band-Aid or quell some first-grader drama.

One day, a young girl lost her first tooth. We were walking down the path behind the school to check on fairy houses that we’d built earlier in the year during the after-school program. The girl stopped in the middle of the path, looked at me, tooth in hand with some blood on her chin.

“I just lost my tooth,” she said. The other kids swarmed and started chiming in.

“I lost mine already, and the tooth fairy came!”

It clearly was an exciting occasion that I’d forgotten about, and underestimated. I looked at the other counselor. The group was getting way off track, but there was nothing to do but let the excitement reign.

The girl put her bloody tooth in my hand. “What do I do now?” she asked. I told her to take a drink of water and swish it around to get the blood out. I ran back to the building to put the tooth in a plastic bag and keep it safe. For the rest of the day, she kept running her tongue over the missing tooth and kind of smiling.

During the last week of camp, another six-year-old was having a hard time. I asked if she wanted to write in my journal. Sometimes that helps, I said. A little apprehensive about her writing skills, she wrote a couple of sentences. The gist was, ‘”’m a little sad, today is hard, I love Mom.” She flipped to the previous page in my journal and asked what it was about.

“Do you ever write about what you want to happen when you’re older?” she asked.

My work became much clearer this summer. I got to know the kids better and help to provide opportunities for them. They’ve provided me with an opportunity, too, to take joy in little moments, the small accomplishments.

The island is starting to feel more comfortable as well. Those conversations in the grocery store, on the sidewalk, they’re starting to happen. I can think and write about what I want to happen next when I’m no longer a Fellow, but right now, sitting on these rocks is pretty great.

I can’t imagine not staying for a second year.

Hillary Savage works with the Vinalhaven School and Partners in Island Education on after-school, adult learning and parent-support programs. She is a graduate of the University of Maine, Machias with a degree in fine arts and creative writing 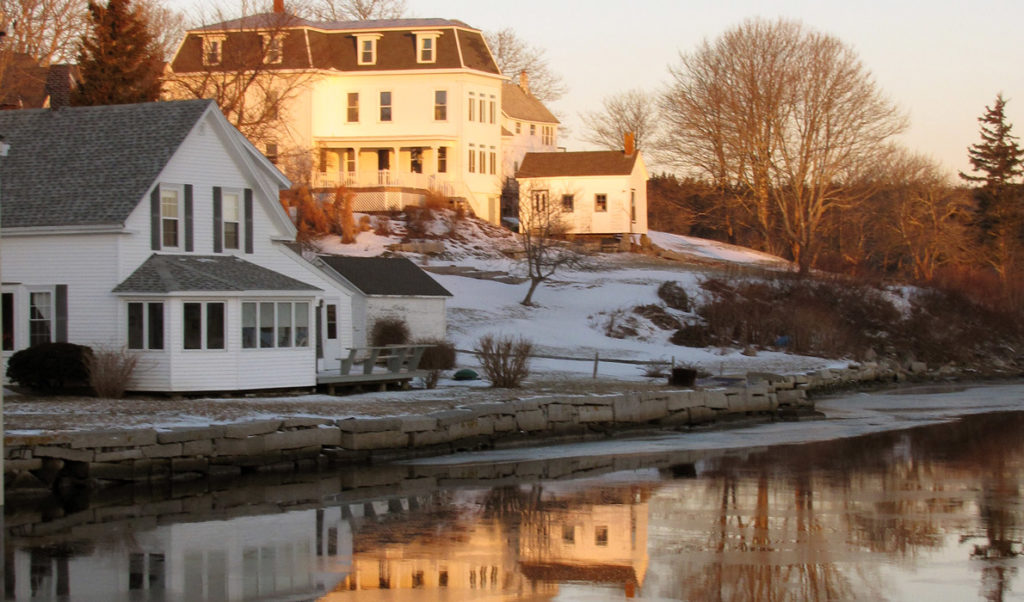 The Basin on Vinalhaven in winter.