On board the USNS Washington Chambers, a merchant marine ship designed to carry cargo, four of us stood on the flying bridge, waiting with our eyes to the sky. The Pacific sun beat down on us, but we didn’t care. We were waiting for a fly-by from an F-18 Hornet fighter jet.

The cargo mate looked ahead and pointed. We all looked in our binoculars. A black spot in the sky, low on the horizon, appeared in our lenses, growing slowly at first. Then we spotted the glint of the canopy, and the jet suddenly came at us faster and faster.

Then it flew past the ship at barely 20 yards, completely silent.

For a split second that seemed to hang in the air, my mind forgot that fighter jets are designed to fly at super-sonic speed. That means it will fly faster than the sound it makes as it goes. And when the sound barrier breaks, it makes a terrifyingly loud explosion of noise.

The plane shot past us, the split-second passed, and then the blast of sound crashed into our ears with incredible power, jarring our very teeth. We turned to watch as the pilot cut across our stern, the lingering roar of the sound barrier still trying to keep up with him. Then he put his elevators hard down and shot straight up into the sky, disappearing from view into the cumulus clouds.

This was the grand finale to a long weekend of playing with very fun U.S. Navy technology. In order to qualify as naval aviators, trainee pilots have to shoot at “live” targets—i.e., a flying target that is moving and trying to escape the aircraft. Today’s navy uses remote-controlled drones as its targets to accomplish that mission.

When we arrived in port somewhere in the Pacific, we offloaded our usual air detachment and its helicopters, and exchanged them for four orange objects that looked very much like missiles. Our other missiles come in strong protective cases, however, so it was clear these were not the same.

The bos’n explained that we would be the launch point for drone exercises with our friendly neighborhood aircraft carrier over the weekend. Our ship, usually designated to carry ammunition, would instead shoot off these remote controlled aircraft for the navy pilots to shoot at. This was exciting to everyone on board, especially the engineers among the crew.

“It’s got a tiny gas turbine in it!” exclaimed Chief Engineer Rhodes, nearly bouncing with the excitement of a boy seeing a fire truck for the first time. Gas turbines are usually enormous and designed to drive 747 planes and F-18 fighter jets. Instead, these eight-foot-long drones would be driven by a tiny version of that technology.

The best part, however, was the launch from the flight deck of the Washington Chambers. The gas turbine engine was not enough to get the drone airborne in the 50-foot space. Instead, rocket boosters would fire and push the drone into the air, then be jettisoned into the sea.

The captain, understanding the excitement among his crew, graciously kept us up to date on the launch time. As it approached, the upper decks of the Chambers became lined with people who wanted to see this event.

As the first drone readied for launch, the little turbine spun up, creating a piercing sound that engulfed the entire ship. Then the navy crew unhooked the lashings from the machine and bolted for cover. The deck was still for a moment, except for the screaming of the turbines, and then, with a blasting roar of green fire, the rockets lit off and threw the drone into the air. It traveled fast out of sight, too small to make out in the sky.

This event was repeated three more times as the weekend progressed, and each time saw all boots on deck to watch. After all, it’s not every college student who gets to take video of the U.S. military playing with its more fun toys.

Benjamin Stevens of Islesford (Little Cranberry Island) is a student at Maine Maritime Academy in Castine. He is working this summer aboard the USNS Washington Chambers. 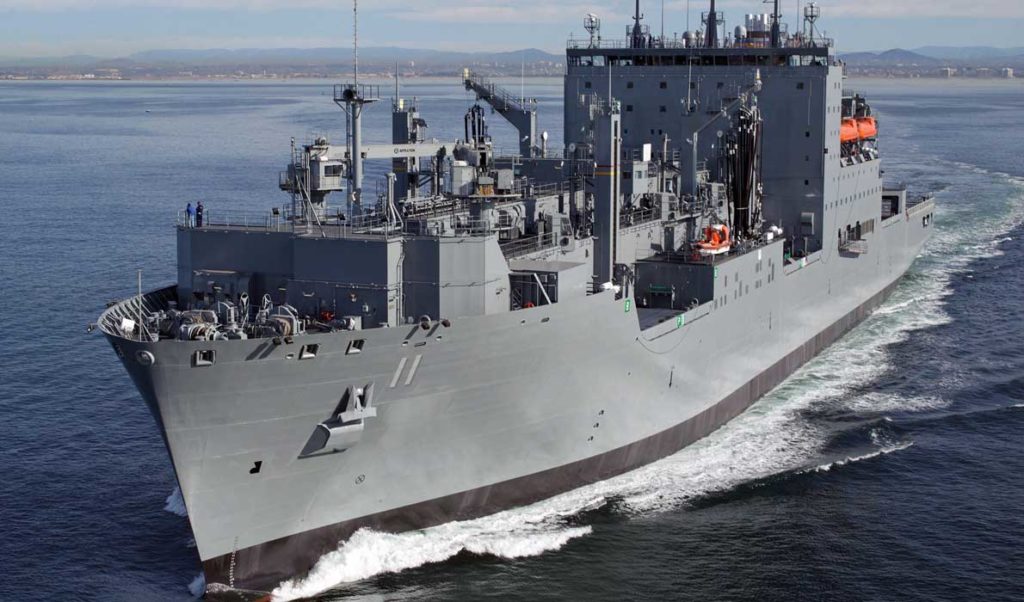