One April day some 25 years ago, fine mesh fyke nets suddenly appeared in the estuary that leads to the Somesville Mill Pond. The market for elvers—glass eels favored by Japanese diners—had exploded, with astronomical per-pound prices driving the new fishery. As they had with urchins, harvesters took as much as they liked, putting a dent in an important link in the food chain.

In her book Seaweed Chronicles: A World at the Water’s Edge (Algonquin Books of Chapel Hill, 2018), Blue Hill-based writer Susan Hand Shetterly takes up another, more recent Maine coast gold rush: seaweed harvesting. While it has always been a resource, seaweed is experiencing a boom. “Kelp is the new kale!” declares a T-shirt, while a host of new health and beauty products promotes its benefits.

Pressure on the resource is full on.

Shetterly begins her study from a rather unusual place: Winslow Homer’s famous painting The Fog Warning, 1885. While acknowledging the drama of the scene—the fisherman in his dory hauling on oars to get to the mother ship before the fog cuts him off—she focuses on the halibut at his feet. At the time the canvas was painted, Shetterly explains, the halibut catch had started to nosedive. The collapse of inshore fishing led fishermen to hire themselves out to Grand Banks ships. The painting is a warning, “not of fog,” she writes, “but of how quickly a good thing can disappear.”

Shetterly recounts the subsequent plundering of the Gulf of Maine and the “feeding down the food chain,” from largest to smallest species. She also highlights the ongoing shifts in ocean currents and temperature, what some scientists refer to as “a regime change.” Using an expression usually applied to banks, she notes that the ocean is not “too big to fail.”

This seaweed story unfolds through a series of encounters with men and women “who work and live at the shore.” It’s a very hands-on account; in several cases, the author helps out with the harvesting, enduring chilly journeys over Maine waters to capture her eye-witness accounts.

Shetterly approaches the subject from many angles—and places. One chapter describes Donna Kausen’s flock of Romney sheep overwintering on Flat Island in Pleasant Bay off Addison. The sheep are able to survive the harsh weather in part by eating kelp thrown up on the shore by storms.

“It’s a thin line between flourish and perish out here,” Shetterly observes.

A good bit of text is devoted to the biology of ocean food systems, highlighting how removing a link from the aforementioned chain can provoke challenges to the survival of numerous species. The chapter “Ghost Fish” addresses the fate of alewives and cod, which have reached a stage in the Gulf of Maine called “commercially extinct.”

Shetterly often brings the story back to the personal. She describes her ancestors planting “lazy beds”—gardens that used seaweed as a foundation for growing potatoes—on the Irish coast, her children studying tide pools when they were little, and her work with neighbors in Surry to revive the alewive run in Patten Stream. Reflecting on the latter project she writes, “A functioning ecosystem is a living mosaic as strong as we can make it.”

Well-known marine and wildlife biologists are called on for insight, among them, Steve Katona, former College of the Atlantic president and now director of the Ocean Health Index for Conservation International; Robin Alden and Ted Ames of the Maine Center for Coastal Fisheries; Dr. Brian Beal, professor of marine ecology at the University of Maine at Machias; Nance Sferra, Maine stewardship and management director for the Nature Conservancy; and Brad Allen, bird group leader for the Maine Department of Inland Fisheries and Wildlife. It’s an all-star line-up.

One of Shetterly’s interviewees, Paul Venno, whose family has “farmed and fished in Cape Rosier since before the Revolutionary War,” makes a point early on that carries though the book: it’s the “big operations” that are doing the harm, not the small harvesters, several of whom Shetterly profiles in the book. Indeed, the principal villain is Acadian Seaplants Limited, a vast and secretive enterprise based in Dartmouth, Nova Scotia. “If there’s a Goliath in the seaweed business,” says Shetterly, “this is it.”

By book’s end you know a great deal about seaweed—its anatomy and diversity, how it’s harvested—and cooked—and its role in cultures and diets around the world. The prose is an engaging blend of biology and storytelling, bringing to mind the writings of Susan Hubbell, late of Milbridge, John McPhee, and Rachel Carson. Like these authors, Shetterly is able to bring natural history to life through eloquent prose. Describing her friend Sarah Redmond harvesting dulse off the coast of Sorrento in Frenchman Bay, she notes how the color of a seaweed rope rising out of the sea “lights up the surface like a line of votive candles.”

Like Carson and company, Shetterly also sounds the alarm.

“Between climate change, extinctions, and international trade,” she warns, “we erase or imperil thousands of years of evolutional adaptation and set off new bouts of survival of the fittest.” If the seaweed situation seems grim, Shetterly also sees hope in regulation and stewardship. “When we put wild systems first,” she avers, “we are passing on the gift of life to many species, including our own.”

Carl Little contributed an essay to Nature Observed: The Landscapes of Joseph Fio 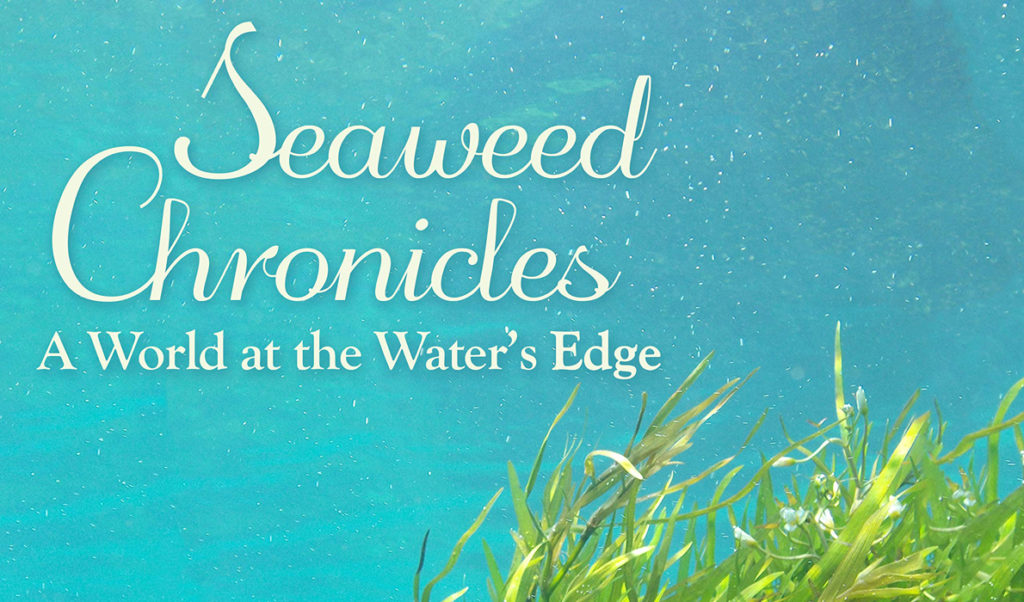