After living on Deer Isle for a year, I have a lot of sunset photos, and they are spectacular. The sunrises are amazing as well, but I don’t have as many pictures of those. You can probably guess why.

I knew from leading sea kayaking trips that this was a particularly beautiful part of coastal Maine, but no matter how many times I see the sun set from Merchant’s Row, I always stop to marvel at it. These sunsets really have it all—over the water, the Camden hills in the distance, abundant wildlife sightings, and those islands! They are scattered across the bay, and when the fading light of day dashes across their sloped, granite slabs, they shine like pink gemstones. I think I live in one of the most picturesque places on the planet.

Before the spring daylight saving adjustment, I often would be headed home in the late afternoon, conveniently right around sunset. I generally had spent most of the day working inside and wanted to make sure I could soak up the last drops of vitamin D from the sky. So on my drive home I would choose a place to enjoy the fresh air and watch the sun sink behind Camden Hills as the darkness began to engulf the island.

During the first few months of my fellowship it had been one of my goals to explore all of the nature preserves and public parks on the island. I discovered that most included places to take in the water but there were still many nooks and crannies that I hadn’t thought to go. I began traveling down the roads on the western side I hadn’t been down just to see if I could catch the sunset from a new angle.

I became a sort of sun chaser, like a tornado chaser but a whole lot less dangerous. Every day as the sun slipped below the trees I would race down the dirt roads trying to find a spot in time to take a picture. I would be so proud that when I finally got home, I would usually post it on Facebook, even though it probably looked just like the one I took the day before. But guess what? I am not the only one who likes a good sunset picture.

Recently, I had a conversation with a friend who is a bonafide photographer who lives on the islan about why the sunsets are so good, and we both agreed it is the variation—they are always so different, and so colorful. She told me a story about taking an art class when she was in school and they were painting “realistic” sunset pictures. She painted a purple sky for the background with hot pink and yellow clouds. The teacher told her the painting was not what a sunset looked like and that the sky could not be those colors. If that teacher had visited Deer Isle she would know that the sky is capable of producing more shades than are in a 64-count box of Crayola crayons. Even purple, with cotton candy and lemonade clouds.

In my second year of living and working here, I will continue to chase the sunsets, looking for the perfect spot, or a new angle, or an undiscovered observation point. I will continue to fill my phone’s memory with photos that look identical to an outsider but will transport me to the time and place of the photo. I will continue to explore my island home and marvel at the scenery that I am becoming an integral part of. Perhaps, for my second year, I’ll start chasing those sunrises, too.

Dana Mark works with the Deer Isle-Stonington Elementary School in partnership with the Island Institute’s SuCCESS program to bring aquaculture education and mentoring to students. She also works with the historical society training volunteers to catalogue the extensive collection of oral histories. She is a graduate of Unity College. 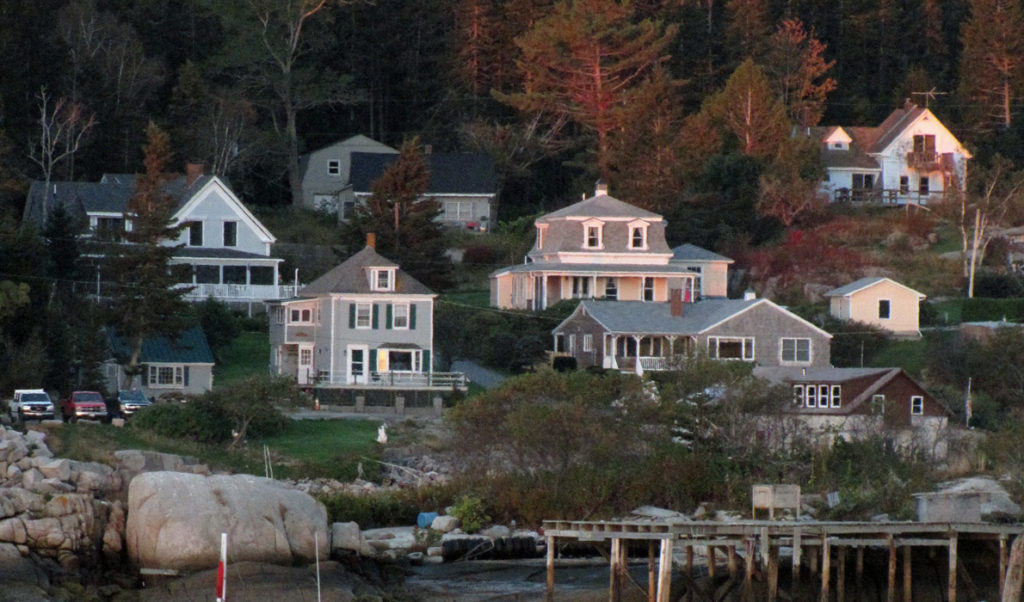