A second massive cruise ship—the 11-deck Norwegian Sun—may soon tie up within the Bay of Fundy at a temporary berth being offered by the Eastport Port Authority.

On June 14, the 785-foot cruise ship Oceana Riviera arrived from Miami without passengers, staffed by 131 crew members who remain quarantined onboard due to concerns about COVID-19 transmission. While no known crew member onboard the 15-deck behemoth has tested positive for the virus, there have been concerns by local, state, and federal officials given the unique role cruise ships have played in spreading the ongoing, global COVID-19 pandemic.

Among state agencies involved have been the office of Maine’s governor and the Maine Center for Disease Control. At the federal level, authorization for temporarily docking the Oceana Riviera in Eastport required buy-in from U.S. Customs, the U.S. Centers for Disease Control, and the U.S. Coast Guard. The Eastport city council recently voted 4-1 to allow the docking of the Riviera.

Ongoing negotiations with Norwegian Cruises Lines, which owns both vessels, could see the Norwegian Sun tie up at Eastport’s cargo terminal as soon as July 6, according to Chris Gardner, the executive director of the Eastport Port Authority.

Gardner said there won’t be a third cruise line vessel docking in Eastport. “With the arrival of the Norwegian Sun, we are at our limit” in terms of dock space, he said.

Like dozens of other cruise ships affected by the pandemic-inspired federal “No Sail” order in effect since mid-March, both ships, like dozens of others, had been anchoring off the coast of Miami, Florida. For months, the ship’s owner—Norwegian Cruise Line Holdings—has been eager to move the ships far from what’s known as “hurricane alley,” given the 2020 hurricane season that began in coastal Florida June 1.

“We seem to be the only port in New England that is willing to help the cruise ship industry,” Gardner said.

The Eastport Port Authority has stipulated that the long-term parking arrangements for the Riviera will cost the cruise ship owners $2 a foot per day, with an initial 60-day stay, with additional 30-day extensions as required. Payment in advance.

Gardner said all revenues will be used to pay down debt on the $18 million breakwater built to replace an aging dock that collapsed in 2017 due to structural issues. What the port authority would charge to berth the Norwegian Sun remains under negotiation.

While the breakwater dock has easy access to sewage disposal, the cargo terminal does not, requiring waste be hauled ashore for disposal. That’s been done before, Gardner said, but may involve additional cost.

“We’ve had U.S. Navy ships with 400 aboard tied up at the cargo terminal, and it wasn’t a problem. With the Norwegian Sun, we’re talking 145 people.”

The 11-deck Norwegian Sun is larger than the Oceana Riviera, at 848 feet. It’s rated to accommodate 1,936 passengers, compared to the Riviera’s 1,250 passengers. Its crew is usually 906, although only 145 crew members remain aboard the Norwegian Sun. “There has never been COVID-19 reported on this ship, even when it was cruising with passengers,” Gardner said.

The port authority will meet with the Eastport City Council on Friday, June 26, to outline its strategy for meeting the needs of those aboard a second vessel.

“Some local people have become very good friends with those quarantined on the Riviera,” Gardner said. “They (the onboard crew) are as happy to be here as we are to have them. Some crew feel like they won the lottery given that, because of COVID-19 concerns, as they can’t go home” to the various countries that are their homes. 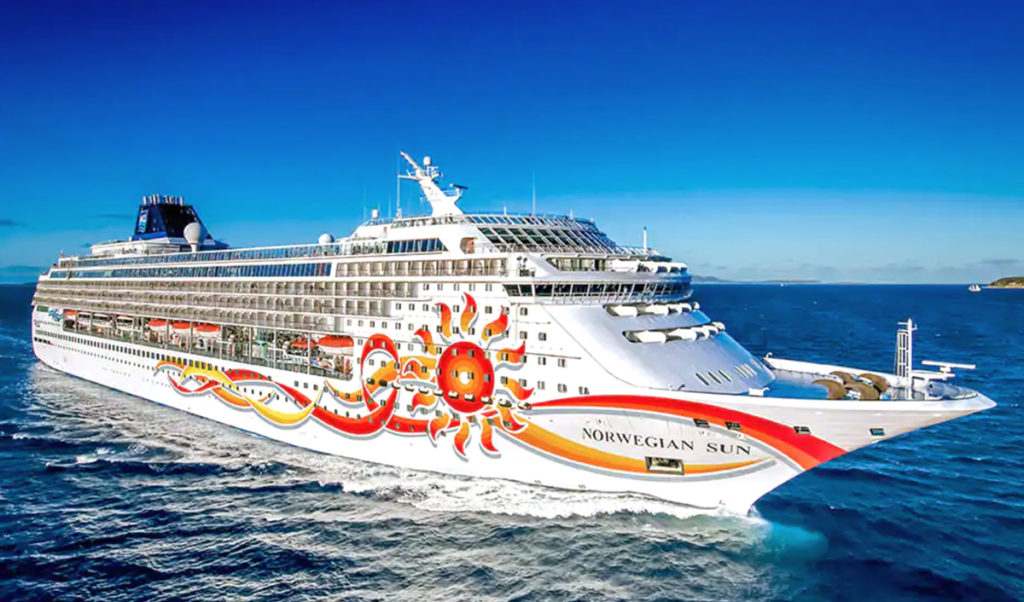