On a Saturday morning in late summer, the Red Studio at Chebeague Island’s Island Commons is crowded. A customer requests dimensions of the oriental rug displayed outside. Grandmother and grandson sort through boxes of used kids’ books and games. Teenagers examine vintage jewelry, and there are oohs and aahs over a brightly upholstered chair, soon carted off to a new home.

Just a typical day at the Red Studio, the island’s lively resale shop now in its third season. All proceeds help to offset more than $100,000 annual operating deficits at the Commons, a seven-bed assisted living facility, serving the community since 1999.

On Islesboro, the Furniture Market bustles with customers on summer Wednesdays. In 2013, the resale shop opened as a fundraising arm of Boardman Cottage, the island’s eight-bed assisted living home, now 15 years old.

“We’re one of the most popular places on the island,” said Bonnie Hughes, president of Boardman Cottage’s board. 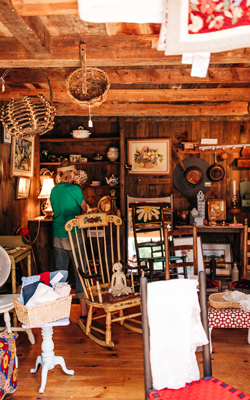 Fundraising is a year-round necessity for Maine’s four island eldercare facilities—the Commons, Boardman Cottage, Ivan Calderwood Homestead on Vinalhaven, and Southern Harbor House on North Haven. These small nonprofits were established to enable islanders to remain near families and friends in their own communities when they are no longer able to live independently. Most residents of the facilities qualify financially for MaineCare (Medicaid), which covers only about 60 percent of operating costs.

To keep their doors open, the homes—and their network of volunteers—must continually raise money. Bake sales, auctions and parties serve their purpose. But as every islander knows, once a big piece of furniture makes the trip from the mainland, it usually remains, passed from one island owner to another.  That fact of life gave birth to Islesboro’s Furniture Market.

“Everybody’s happy to buy something that’s already here and to keep it here,” said Carol Pierson, a board member who runs the Islesboro shop as a volunteer. “I think we’ve sold the same sofa at least twice.”

Inventory at both shops comes from donations, construction salvage, estates, remodeling projects, and the local transfer station. Hughes admits the whims of buyers often amaze her.

“I sometimes have a hard time keeping a straight face,” she says. “I think, ‘What on earth are you going to do with that?’”

Always eager to try new fundraising ideas, the Island Commons copied Islesboro’s example. Volunteers emptied a small outbuilding on the Commons property and launched their own retail shop, managed by board member Sandra McLean. Sam, as she’s known to everyone on Chebeague, is a veteran of auctions, yard sales, and the lively world of online merchandising. She loves the idea of “repurposing.”

“I get a lot of joy from this,” says McLean, hustling to open the Red Studio. “We’re recycling—and helping people.” Part of the fun, she adds, is interacting with the customers. “We’re a social event as well as a charity. It’s fun.”

McLean is constantly on the hunt for donations, many of which make a temporary stop in her own garage for refurbishing. Occasionally, a customer arrives at the Red Studio to discover a former belonging, now magically transformed. The long-ago owner of a black bathing suit recently walked in, saw it hanging on the wall, artfully framed on a striped background. “That was mine!” she declared gleefully. Out came the checkbook.

The donation of vintage clothing, collected for many years by an islander, launched the Red Studio’s latest merchandising sideline: Online sales on sites like Etsy and eBay. In the winter, when the Red Studio is closed, McLean sells clothing and small items online, explaining to customers the mission of the Island Commons and the good deeds it does for Chebeague’s elders. That often brings a thank-you from the buyer and a donation.

Sales took off last winter, with international buyers especially active. A box of bandanas was shipped to Tokyo, a set of suspenders to Germany, and a crystal bowl to Spain. A world map now adorns a wall at the Red Studio with pins marking the new homes for island treasures.

Locals are loyal customers, too.

“People seem to love the idea that this came out of somebody’s house on the island and is now going in their home,” said Pierson. “People will often justify buying something by saying, ‘I really don’t need this, but it helps Boardman Cottage.’”

While the resale shops do help the bottom line, they perform another important service: a reminder of the vital work performed at Island Commons and Boardman Cottage everyday.

“We’re building good will,” said McLean. “This whole effort brings joy to a lot of people.”

Susan Q. Stranahan, a journalist, is president of the board of Chebeague’s Island Commons. 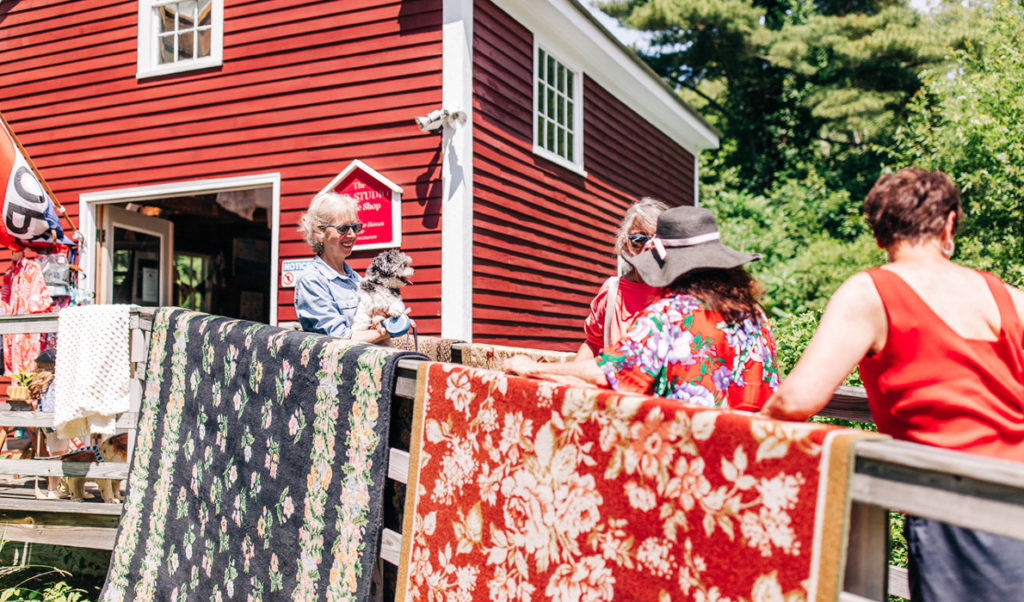