Move over, NIMBY. Make some room for NIMFY.

Shorthand for “Not in My Back Yard,” NIMBY is a predictable Maine rhetorical retort to real and imagined plans for everything from near-shore oyster, scallop, and mussel aquaculture projects to proposals such as a Maine North Woods National Monument designation and an east-west highway.

Thanks to a recent unanimous decision by Maine’s Supreme Judicial Court, there’s now NIMFY, shorthand for “Not in My Front Yard.”

In a long-awaited high court ruling on a lawsuit brought by Calais-born brothers Carl and Ken Ross, who own shoreline property in Washington County, the high court ruled that they and other owners of Maine’s jagged 3,400-mile coastline are protected from unauthorized commercial seaweed harvesting within the intertidal zone of their shorefront property, the rocky and muddy area between a shoreline’s high-tide and low-tide footprint.

Marine conservationists tout intertidal zones that are thick with rockweed as an important source of nutrients, shelter, and spawning grounds for juvenile lobster, mussels, snails, and whelks as well as juvenile pollock and rock gunnel. The high court’s ruling said rockweed is “important to Maine’s coastline ecology because it moderates temperatures and provides a habitat for marine organisms.”

At issue in both the 2015 Washington County Superior Court case and the state supreme court’s appeal ruling in March was a definitive, legal determination of one long-lingering and long-debated question: Is rockweed growing in intertidal zones the private property of adjacent shoreline owners, or is the seaweed growing there a public resource?

The defendant in the case was Acadian Seaplants, Ltd. For decades, the firm based in Dartmouth, Nova Scotia, has been harvesting rockweed—a common name for several species of brown seaweed—with or without the consent of shoreline property owners in Washington County. Most recently, harvesting has spilled south into Hancock County, where three-ton and four-ton skiffs outfitted with specifically designed cutting rakes collect and haul this oddball commodity to shore. When dried, rockweed is used in fertilizer, animal feed, and an array of commercial products, from toothpaste to ice cream.

The Maine Department of Marine Resources estimates that 22.4 million pounds of seaweed worth about $921,818 was harvested in 2018, which works out to a value of four cents per pound. While DMR issued 143 licenses last year for seaweed harvesting, it did so with the caveat that the legality of taking seaweed from intertidal zones “has yet to be determined by the courts.”

Now it has. In its ruling, Maine’s supreme court declared that the rockweed growing within an intertidal zone is the private property of the upland shoreline owners, protected as would be plum tomatoes growing within an onshore garden plot.

“We agree that rockweed in the intertidal zone belongs to the upland property owner and therefore is not public property, and is not held in trust by the state for public use, and cannot be harvested by members of the public as a matter of right. Accordingly, we affirm the (Washington County Superior Court) judgment,” the judges wrote.

Some of the legal issues involved date back to the 1640s, when the Massachusetts Bay Colony adopted an ordinance restricting public intertidal access to “fishing, fowling and navigation.” Acadian Seaplants contended in court proceedings that rockweed harvesting could be viewed as fishing or navigational activities.

Maine’s high court disagreed: “We conclude that, contrary to Acadian’s contention, harvesting living rockweed secured to the intertidal bed cannot be seen as either ‘fishing’ or ‘navigation,’ even when those terms are interpreted in a sympathetically broad and generous way. The fundamental dissimilarities between the harvesting of fish and of rockweed as a marine plant demonstrate that Acadian is not in the business of ‘fishing.’

“Although there is a navigational component to harvesting rockweed, it is secondary to what Acadian seeks to do. Rather, the harvesters operate skiffs in intertidal waters for the principal purpose of engaging in a different, non-navigation activity, namely, cutting and taking significant portions of rockweed plants. The harvesting of rockweed, even by boat, involves the use of the intertidal land itself because living rockweed is attached to the intertidal substrate even if it does not draw nutrients from the land. Therefore, Acadian uses the intertidal waters not for ‘navigation’ in its own right, but merely to gain access to the attached rockweed.”

An appeal of the Maine high court’s decision to the U.S. Supreme Court is possible, but apparently not likely. Acadian Seaplants filed a motion for reconsideration, but that motion was denied.

“I’ve heard talk of a petition to the U.S. Supreme Court, but there’s no legitimate basis for the Supreme Court to hear an appeal,” said Gordon Smith of the Verrill Dana law firm in Portland, the Ross’ brothers’ attorney.

Meanwhile, the Maine ruling remains an ongoing subject of debate within the Maine Legislature. And beyond. Two emeritus academics—Steven Moore of Great Diamond Island and Celeste Roberge of South Portland—reacted to the ruling, writing a widely published op-ed piece that claims that rockweed is not a plant, but a species of algae. “Rockweed is more fish than plant, more clam than tomato,” they said.

Succinctly, the Maine high court ruling said this: “Rockweed is a plant.” And why not? It was a fact stipulated by both sides of the lawsuit from day one. In their commentary, Moore and Roberge also predicted that, as a result of the ruling, coastal landowners “should expect a very significant property tax hike.”

“That’s totally ridiculous,” said Kerry Leichtman, an assessor involved in determining coastline property tax assessments in Camden and Rockport. “It’s a new issue, so I don’t want to say it’s impossible, but assessment is linked to market value, on a case-by-case basis,” he said. “If suddenly there were people making speculative investments based on the value of seaweed, that could drive up property values,” he said.  Given a current, nominal value rockweed, Leichtman said: “I don’t see that happening.”

Ken Ross’ response to the ruling reiterates marine biology claims of the long list of conservation advocates who submitted briefs in support of protecting intertidal zones from rockweed harvesting.

“We welcome this ruling and thank everyone who supported our case,” Ross said. “We expect that most intertidal landowners will want to protect their rockweed. That is a wise investment for the future of the Maine coast. Fisheries, wildlife, and the quality of life all depend on a healthy environment, but removing large amounts of habitat at the base of the food web will degrade the environment. That is an especially poor bargain when it is made for a handful of Maine jobs to produce fertilizer.

“Wild rockweed is a lot more valuable if you leave it alone than if you cut and sell it for a few cents a pound. If there’s going to be a future for fishing jobs in Maine, we’d better take care of fish habitat. Fisheries, wildlife, and the quality of life all depend on a healthy environment, but removing large amounts of habitat at the base of the food web will degrade the environment.” 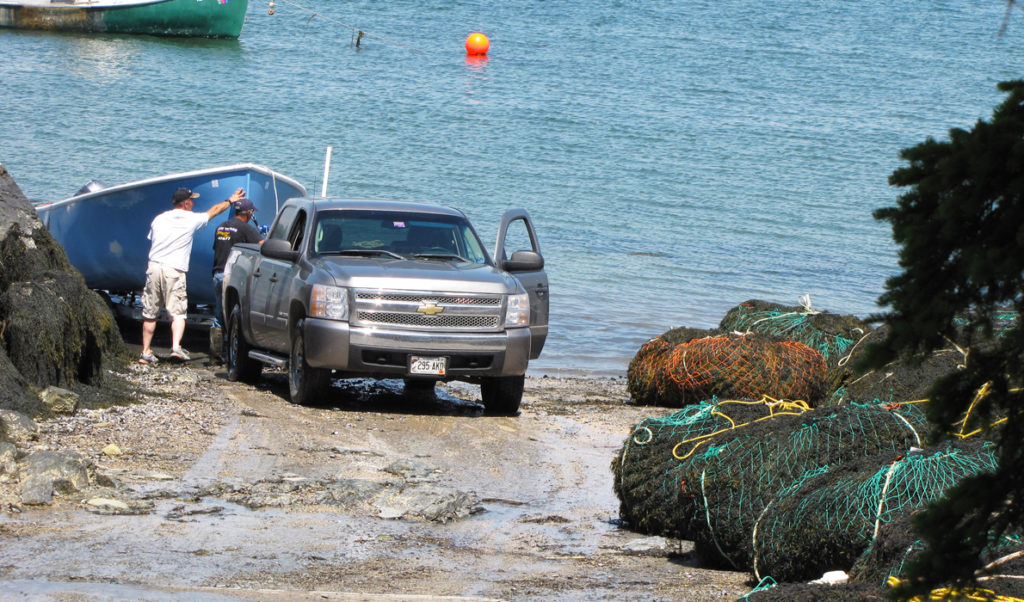