I like the feeling of island living when the holidays are over and the new year has just begun. My husband Bruce has all of his lobster traps out of the water and his boat, the Barbara Ann, has been hauled out at a nearby mainland boatyard since the end of November.

I am remembering the highs and lows of my own year just past, and planning for all manner of fresh starts in 2016. Many of these plans involve getting rid of the stuff that clutters our closets and shelves to simplify our lives and be more effective with storage.

We are the most relaxed at this time of year, but for me the road to our winter equanimity is fraught with potholes of adaptation. The man who used to name Christmas as a deadline for getting his traps out of the water now embraces semi-retirement one month earlier. Just as he is adjusting to the idea of having time to sleep-in or plan meals with friends, I am working at a fever pitch to be ready for a craft fair commitment and to mail off the last of my Christmas jewelry orders. My head is in a disarray of details.

We are never more out of synch than during the first few weeks after Bruce has finished his fishing year. Innocent comments like, “We should find a way to get rid of the clutter on the kitchen table and weed out the cookbooks on the bookshelf,” trigger in me the reactions of a harpie. He is ready to tackle those projects that need to be done because he has had time to unwind and think about them. He seems to adjust naturally to the fact that his breakfast time, lunch time and late evening now coincide with the time I used to have to myself when he was out hauling traps and going to bed early. I search for a different quiet time to help me settle my brain.

I am the prickly one, the introvert who seems to also have a good dose of ADD. (One of my sons once commented that it made him feel crazy to watch me try to get things done.) I need time and space to start a project, move to start another one in the next ten minutes and begin a third during the next half hour. If I am left uninterrupted, I circle my way through these tasks several times, usually shooting off to do something else, eventually completing more than I had planned.

My strong reaction to Bruce’s comment about clutter in the kitchen was inflamed by the fact that he had already begun his own de-cluttering by throwing out a large stack of magazines from the bathroom. “I was saving some of those!” I wailed. (Yes, I admit to wailing. I was still stressed out.)

“What was in there that you needed? I bet you don’t even know. You haven’t looked at some of those magazines in years!” he responded.

I countered with, “I don’t remember specifically, but, I know there were things I counted on knowing were there and when I needed them I would know just where to find them! Don’t throw out my stuff!”

Lest you think Bruce is married to a shrew, let me say that the kitchen clutter confabulation ended when I said, “You’re right, you’re right, I hate the clutter too and I hate being wrong, and I don’t even know what you threw out so I’ll let it go.”

We started to laugh, my tears dried up, and we comforted ourselves with the fact that we might have clutter but at least we’re not hoarders.

Bruce also enjoyed pointing out that I said he was right, twice. He spends a lot more time at the kitchen table than I do. It serves as his “office.” He faces that bookshelf every day. The jumbled stacks of papers tucked in between the also-unread-for-years cookbooks are anything but calming to look at.

As I proceeded with the task of clearing the bookshelf, I started with the corner cupboard where all of the baking supplies were in disarray and unconventional bags of flour had passed their use-by date. Bruce was out in his shop, building new traps, and in my quiet afternoon alone I made my way over to the bookshelf and kitchen table several times.

Mission accomplished with the bonus of a clean cupboard, and done before the end of the year.

By now, I’ve adjusted, once again, to Bruce’s semi-retirement. We begin the new year with a kitchen table that is easy to clear when guests come for dinner. I find new pockets of time to myself while Bruce is working in the shop and we spend our evenings together catching up on movies from NetFlix.

We’re off to a fresh start, back in synch, with time to travel and visit family, time to work at our own pace and time to read. At the top of my book list this month: The Life-Changing Magic of Tidying Up: The Japanese art of Decluttering and Organizing by Marie Kondo. 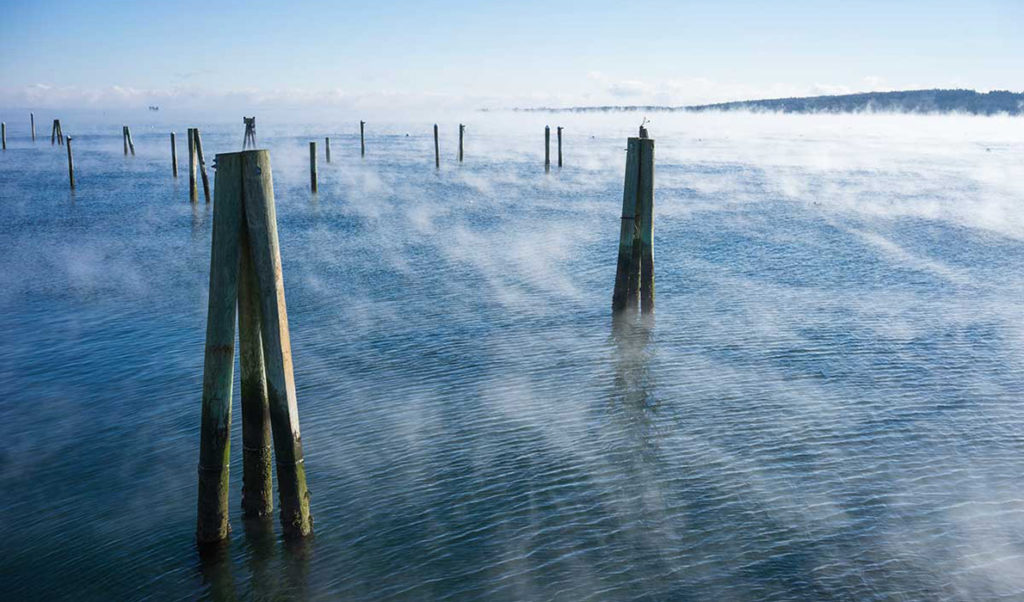