One of the more telling components of the Penobscot Marine Museum’s summer exhibit is a collection of headlines from the fisheries trade magazine, National Fisherman, pasted to a wall above a timeline that begins in 1954 and ends in 2014. Visitors reading the headlines will come away with at least two observations: that threats to the fishing industry are not new, and that change is the norm.

From 1958: “Large Power Dams Hinder Salmon Migration.” In another part of the exhibit, we see a map of dams on the Penobscot River, including those that have been removed to help restore salmon.

From 1964: “Report Points Up Ills of Maine Fisheries.” From 1978: “Gap Between Scientists, Fishermen Remains Unbridged.” And from 2003: “Agency considering closure of northern cod fishery.”

The summer exhibit, “Net Result: Our Evolving Fisheries,” dovetails well with one of the Searsport museum’s permanent features, “Gone Fishing,” a double entendre about the activity and its potential demise.

There are plenty of reminders about the course New England’s fisheries has taken. A panel on the museum lawn features a map showing the location of 160 weirs along the Maine coast in 1870; there were 35 of these fish traps in Searsport and neighboring Stockton Springs alone. Not a single weir remains. 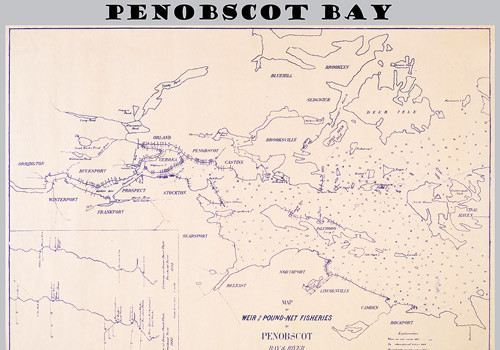 A map shows the locations of weirs along the Maine coast in 1870.

“Now you have to go to New Brunswick to see one,” says Cipperly Good, the museum’s curator and collections manager, while giving a tour of the exhibit. “The whole theme is the evolution of our fisheries, in terms of propulsion, technology, and how you find the fish.”

Propulsion is explained with such artifacts as a General Motors diesel engine that had been in a World War II-era tank and then put into a lobster boat. Such power changed fishing, Good notes.

“When you have to row out there and pull them out by hand, then the range is smaller, and the catch is smaller.”

The evolution of boat construction is represented in a couple of wooden boats on display, while steel and aluminum are explained through an interactive exhibit in which visitors can hammer rivets. The newer composite materials are demonstrated by sheets of the soft, pliable material on loan from Belfast’s Front Street Shipyard.

In another room, some of the hardware that would have been found on a fishing boat in the 1940s, 1970s, and today is displayed, revealing how much of the guess work is gone from the industry.

“We have all the technology that is effective in finding the fish,” Good said. “It used to be intuitive. Now, you stare at the sonar screen.”

A touch-screen featuring a map of U.S. harbors allows visitors to select a harbor to see what fish are landed there. Photographs from National Fisherman illustrate the show, which Good points out is one of the benefits of the museum having been given the magazine’s photographic archives in 2012. The exhibit also uses art from the museum’s collection to highlight its themes.

The “Net Result” show features hands-on activities for children, such as making paper prints representing fish, which are then stuck in the otter-trawl net on display, and a sardine-backing competition.

The net is one of several visceral displays with which children and adults can interact, such as a replica that allows the visitor to haul a lobster trap by hand. Blueprints for building a net are on display, on loan from Swan’s Island’s Candis Joyce, the daughter of a fishing boat captain from Rockland.

Small aquariums in which fish are kept and vegetation grown from their waste hint at aquaculture, which is emerging as the new fishery.

The museum is open seven days a week; Monday-Saturday hours are 10 a.m. to 5 p.m. and Sunday hours are noon to 5 p.m. See PenobscotMarineMuseum.org for more information.

The museum will host Maine Marine Fare, a fish, food and history event, Sept. 9-10. The keynote speaker will be noted author Paul Greenberg, known for American Catch: The Fight For Our Local Seafood. A panel discussion will include Islesboro food historian (and The Working Waterfront columnist) Sandy Oliver and Maine Sea Grant’s Natalie Springuel; on Sunday, Sept. 10, Sam Hayward of Fore Street restaurant in Portland will present a food demonstration and tasting. 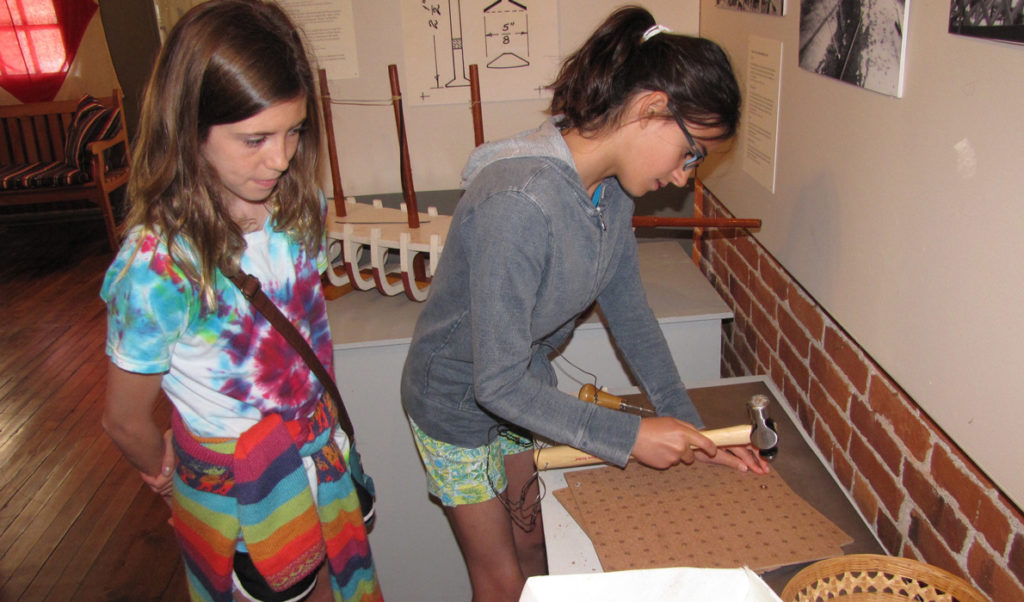