On one of the last days of June, I met up with my friend and neighbor, Cindy Thomas, at the Sand Beach on Islesford. We get together all year long for a brief monthly dip from this beach, but on this particular day we were gathering for a more seasonal ritual; spending some time at the beach.

“I can’t today, but definitely tomorrow.”

“When is high tide? How are the bugs?”

“I have some work to do but I’ll be down later around 3.”

Words transmitted among several of us as we fly by on bikes, or in golf carts, or just make a brief call to check in. For us, it just wouldn’t be an island summer without spending some time at the beach.

There is something so good about sitting on the Islesford Sand Beach in July and August. One can take a dip if it gets too hot, watch the constant comings and goings at the town dock and in the harbor, enjoy seeing combinations of children who are reacquainting their friendships after ten months apart, and just take a few moments to slow down and catch up with each other.

I asked Cindy if she remembered her first time coming to Islesford.

“Of course. I was 15 years old and we were renting Malcolm Sawtelle’s house.” Cindy had grown up outside of Philadelphia and was used to spending summers at her grandmother’s place on the Canadian side of the St. Lawrence River.

“I’d never seen anything like Northeast Harbor before. Such a small town, with all wooden buildings. I was used to bricks and cement. Everything was socked-in with fog. We had the house for a month, but we couldn’t see the view for the first 3 weeks.”

Her family was shocked to wake up that last week to a glorious sunny day with stunning views of Sutton and Mount Desert islands. “We had thought we were on an island miles and miles out to sea. What a surprise!”
Cindy said from the first moment she loved it here, even in the fog. It was so very different from anywhere she had been before. It’s a feeling most people share after their first magical experience of summer in the Cranberry Isles.

My family’s tradition of coming to Islesford dates back to the early 1900s. I grew up hearing stories from my father about his own childhood on the island in summer, arriving in Seal Harbor aboard the steamship, J T Morse.

One of the stand-out memories from my own Islesford childhood was the excitement of being here in late June, when a bi-plane made its annual sweep over the islands to spray DDT. I have mosquito-free memories of sitting on the front porch after spectacular sunsets, watching lights of boats on the water and car headlights as they climbed the winding road to the top of Cadillac Mountain in the near distance. The sound of the bell buoy at night, through an open window, will still remind me of my childhood summers until the adult in me starts to wonder who is out late.

The sweet smell of heliotrope and sun-warmed spruce needles evoke my first understandings of love for a place. I would dream of walking down the rooted grassy path to our house, the ocean and mountains visible through the trees, taking in the smells I had missed. I learned what it meant to yearn for something at a very young age.

I wished I could stay longer every summer, imagining a day I might live on the island year-round. Cindy and I and several others found a way to make our childhood dreams come true, unaware there was a loss that came with that. We forfeited that moment of ten months of longing fulfilled. It took a few years to notice what we had lost, so novel and wonderful it was to be here in the “off season” for good. Now when we step off the boat onto the island, we are less apt to be thinking about magic and more apt to be planning for dinner and wondering how the fishing was today for our husbands, how it could affect their moods.

Not to worry. We found our replacement. The summer beach afternoon promotes longing in winter and restores our souls in summer. Whenever I step from the path among wild roses onto the Sand Beach, I can feel everything in me relax and rejoice. It really is quite magical. 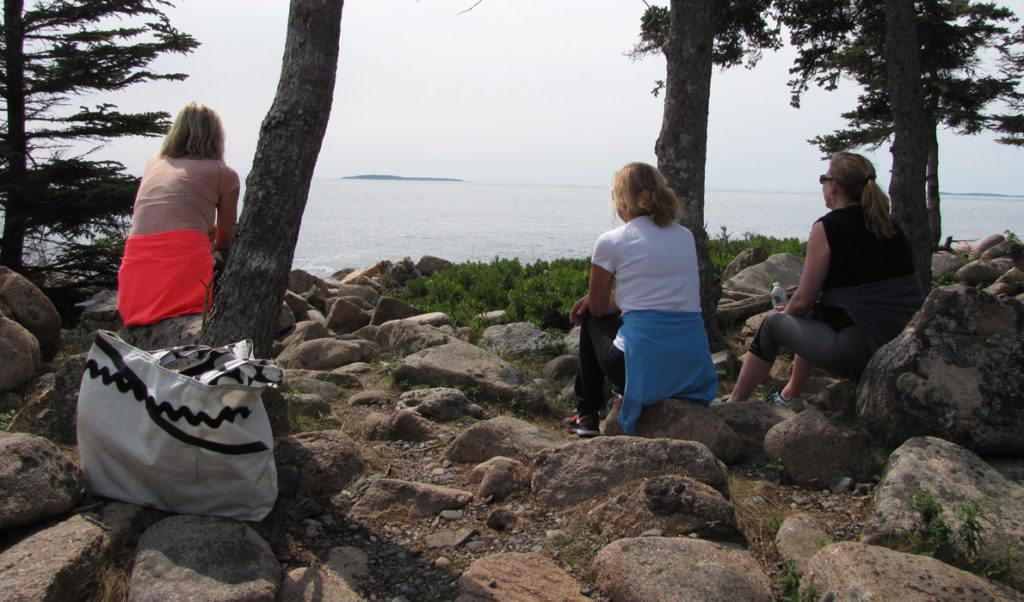