With Maine in the middle of a drought by early August, municipalities vulnerable to water shortages were keeping an eye on their water supplies.

For coastal and island towns, concerns were two-fold. Lagging supply could mean trucking in water from elsewhere, an expensive proposition. And pumping groundwater that is too low risked saltwater intrusion into the freshwater supply.

In August 2015, Castine issued a conservation order prohibiting water usage such as pool-filling and lawn-watering, and requiring restricted water use generally, due to high demand and low rainfall. The order also affected private well owners, who draw from the same aquifer.

“We sit on a huge freshwater bubble in the aquifer, and we’re surrounded by salt water,” said Castine Town Manager James Goodson. “Last summer, we had the drought plus we had the perfect storm—the summer people still here, and Maine Maritime starting back up.”

But, said Stonington Water Company manager Annaleis Hafford, “The amount we have is fairly limited and varies depending on rainfall. Years like this one, when there’s a drought, our supply starts to decline at the time of year when there are more people around.”

Keeping on eye on supply is the name of the game in Maine, said Roger Crouse, head of the Maine Center for Disease Control & Prevention’s Drinking Water Program (medwp.com).

In early August, severe to moderate drought was reported in much of Southern to Midcoast Maine. (Visit the U.S. Drought Monitor at droughtmonitor.unl.edu).

So far, no public water systems in Maine had reported shortages, said Crouse. But, “We have a few utilities in the coastal area that are watching lower levels.”

What makes an area vulnerable?

“It’s about their source of supply,” said Crouse. “Water systems in coastal areas, especially groundwater, have more risks, because there’s little soil over the bedrock, so there’s little storage capacity.” The situation is aggravated by proximity to salt water; overpumping invites saltwater intrusion. “They need a continual supply of rainwater to maintain adequate levels in the wells.”

“If a drought goes on two years, it takes longer for inland supplies to recharge. But in the short-term, coastal supplies feel the impact more quickly,” he said.

Municipalities tackle water supply in different ways, weighing the cost of treating surface water against drilling for groundwater, or searching for multiple options.

“For example,” said Crouse, “the Kennebunk, Kennebunkport and Wells Water District has historically been on a surface water source, Branch Brook. But in dry conditions, the Branch Brook supply is limited. So they’ve often purchased water from the Biddeford and Saco Water Company. Over the last 10 years or so, they’ve looked for groundwater sources to supplement their surface water.”

With the help of loans from the Drinking Water State Revolving Fund administered by the Maine CDC, the district financed development of several groundwater sources.

“They’ve diversified, and half of their water now comes from groundwater, half from surface, so they’re not as susceptible to drought conditions.”

In Stonington, potable water currently is provided from six wells—two are typically used during the winter; with an additional four available for the summer. Off-season usage is 20,000 to 25,000 gallons per day. Summer activity doubles to triples that amount. The water tank level, when full, is 48 feet. Several years ago, the water tank dropped below 20 feet due to a drought, resulting in mandatory conservation. This year, by early August, levels were 40 feet and dropping.  At 30 feet, mandatory conservation would kick in and the town would prepare for bringing in off-site water.

“We’re in fact doing very well,” said Hafford. “But it’s a historical issue.” So the town is in the process of activating a previously drilled well casing that had never been activated.  This was expected to supply about 15,000 gallons per day.  Upgrades to the existing pumphouse, and treatment and filter systems, are also in the works. The town will also replace its old water main on Main Street with funds from a CDBG grant, to further mitigate water losses.

In Castine, shortages in 2015 meant trucking in water. So the town developed a new water source. Goodson credits retired utility superintendent George Motycka with the concept of a horizontal well that captures runoff and water from ponds in a local preserve, then filters and treats it. The new Battle Avenue Filtration Plant is expected to nearly double previous capacity, to about 125,000 gallons per day, exceeding “perfect storm” peak summer consumption of 110,000-120,000 gallons per day.

“All the coastal islands are mostly rock, with a bit of soil, so there’s not a lot of storage capacity,” Crouse said. “They have to be judicious in how much water they pump. And they’re surrounded by salt water. If they contaminate their aquifer by pumping too hard, it will take years to flush it out.” 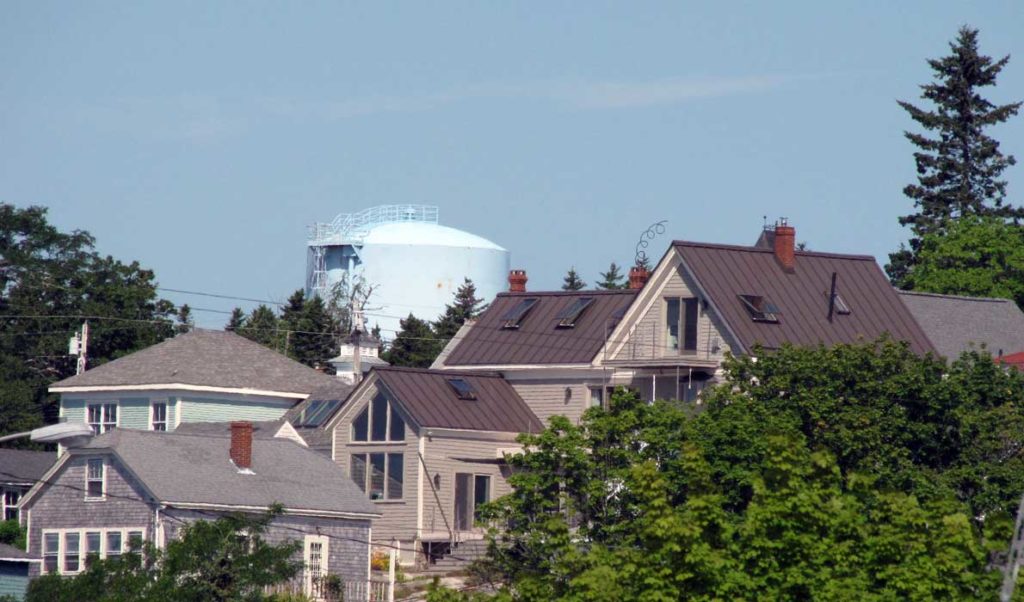