Twenty years have passed since Atlantic salmon became certified as an endangered species, according to federal law. Ed Baum was a salmon biologist with the state at the time—and is now retired—and he remembers the moment well.

He remembers other moments, too, like the power of a 28-pound male Machias River salmon undulating in his hands, and the fly-fishing anglers who provided data on salmon, and the pomp and circumstance of delivering the first-caught salmon to the President of the United States.

He can also recall the chaos of the process that culminated with Atlantic salmon’s placement on the Endangered Species List.

Two decades later, salmon are still here, as is every industry that feared economic impact from an endangered status.

“Washington County did not dry up and fall into the sea as the state proposed it would with the listing,” said Baum, speaking at the biennial Atlantic Salmon and Their Ecosystems Forum, held in January at the University of Maine.

“The sky did not fall,” agreed Dwayne Shaw, executive director of the Downeast Salmon Federation. In fact, Shaw said, he believes “the clouds parted and the sun began to shine again.”

Maine’s salmon rivers are in the best condition in more than a century, and salmon populations were up in 2019 over recent years, though still near historic lows.

Shaw’s group counted 61 salmon redds (nests) in the Machias River in 2019, the most in decades, which Shaw credited to his organization’s hatchery methods that more closely resemble conditions salmon experience in the wild.

Supplementing wild populations with hatchery-raised fish has prevented abrupt extinction, but not the slow degradation of Maine salmon populations, said Joseph Zydlewski, a fish biologist with the U.S. Geological Survey and UMaine.

Federal hatcheries (at Craig Brook and Green Lake) emphasize conservation, not production, and are dedicated to maintaining genetic diversity. Through tagging and monitoring fish, and sophisticated “mate matcher” computer programs, biologists attempt to optimize diversity when spawning and raising fish.

“We’ve gone from stocking more fish in more places to stocking better fish in better places,” said Ernie Atkinson of the Maine Department of Marine Resources. This includes stocking more fish as eggs, based on data that show the more time young salmon spend in the natural environment, the stronger and healthier they become.

Salmon are doing better in freshwater but worse in salt water. Their life strategy, evolved over eons, of spending their early years in predator-free rivers and then growing to adults in the food-rich ocean, has become more and more risky. Atlantic salmon from all North American and European rivers spend their adult lives in the North Atlantic, in the Labrador Sea and off the coast of Greenland, and nearly all populations are in decline.

“A bad year at sea is going to wash out any tangible results we might see in freshwater,” said John Kocik of NOAA’s Northeast Fisheries Science Center.

The part of the ocean that salmon rely on is one of the fastest warming regions in the world. As waters have warmed, salmon have shifted north, and now inhabit rivers that used to be home only to Arctic char. But there’s only so far north they can go. 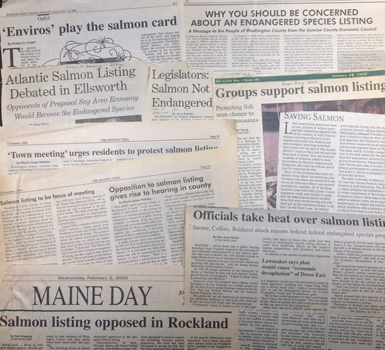 According to Kathy Mills of the Gulf of Maine Research Institute, as winter ends earlier in the ocean, salmon are returning to rivers sooner (on average about 2.5 days), which means, maybe, they are not going through a last burst of marine growth before making the journey, and so are less prepared.

Making their return to Maine rivers as easy as possible is a major focus for many agencies and organizations. With so little control over what happens in the ocean, salmon scientists seem to be doubling down, fervently, on restoring river habitat.

“We know what they need in freshwater, we know how to manage them,” said Sheehan.

A rough estimate by Erik Martin of The Nature Conservancy confirmed that the majority of Maine rivers still have barriers that block fish migration.

“There’s been a dramatic loss of connectivity,” he said.

The Penobscot Nation and conservation partners removed two major dams on the Penobscot River, but remaining dams on the main river at Milford, Enfield, and Medway, and on the Piscataquis, continue to delay adult salmon attempting to get upstream to spawn, said Joseph Zydlewski.

“Nowhere in the world will you find a self-sustaining salmon run above three dams,” said Andy Goode of the Atlantic Salmon Federation.

Through Project SHARE, and working with private landowners, Koenig has worked for decades to make Downeast rivers more suitable. In the Narraguagus River, for example, 99 percent of the upper watershed is now free-flowing, and 55 salmon redds were documented in 2019, another record high number.

At the forum, the USDA Natural Resources Conservation Service announced a $30 million project with the Passamaquoddy Tribe and state fish and wildlife agencies to improve connectivity in Bay of Fundy watersheds including the St. Croix, Pennamaquan, and Dennys rivers.

Despite all the good news, an undercurrent of climate anxiety flowed through the meeting, along with a recognition that status quo management will not bring salmon back from the brink of extinction.

Hence the project announced last year to restore 5,000 native salmon, raised to adults in ocean net pens, to the East Branch Penobscot River. And the tentative discussion of “genetic rescue,” combining populations for hybrid vigor. And questions about how to broaden the community to include more landowners taking restoration action, and more advocates.

The Native Fish Coalition distributed postcards at the forum asking the question, “Why are Atlantic salmon not listed as endangered by the State of Maine?” No one present seemed to have an answer.

“The Endangered Species Act determined that when species need us, we shall go to their aid,” wrote Carl Safina in a recent article. “It says that we, the people, don’t let species go extinct, that this is who we are.” According to Safina, we should stop claiming that people need nature to survive, when the truth is the opposite. What was clear at the January forum is that endangered Atlantic salmon need people, more than ever, for their future survival.

Catherine Schmitt is the author of The President’s Salmon. 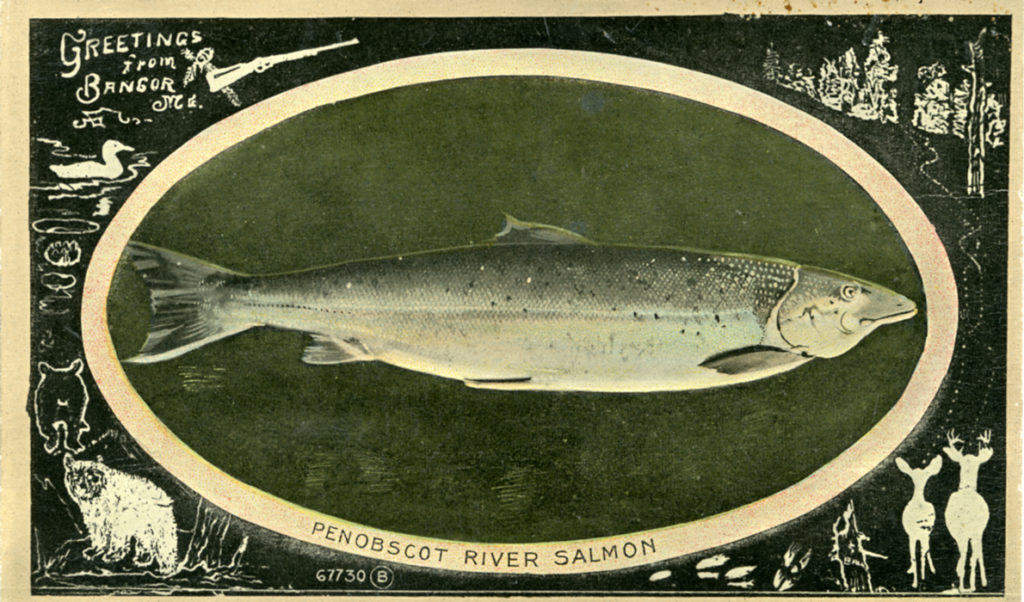