The President’s Salmon: Restoring the King of Fish and Its Home Waters

The title of Catherine Schmitt’s latest book, The President’s Salmon, had me wondering where she was going to take readers.

Schmitt cleverly structures the history of Atlantic salmon in the Penobscot River by weaving in the annual ritual of the first-caught salmon being given to presidents, from William Howard Taft in 1912 to President George H.W. Bush in 1992, by a Maine angler.

This is an ambitious and well-researched book on the struggles of Salmo salar to survive decades of a roller coaster ride on one river. It is the story of a tug-of-war of paper mills, hydropower companies and state agencies against fishermen, environmental advocates and scientists.

“Every year, salmon migrate thousands of miles from the Labrador Sea and the coast of Greenland, around Newfoundland and Cape Breton, along the coast of Nova Scotia and through the Gulf of Maine, into the Penobscot estuary, and inland for hundreds of miles,” Schmitt writes. “It is a feat worthy of contemplation.”

In the early 1900s, when the entire Penobscot River was being eyed for building more dams for industry, “the Geological Survey did not mention salmon, fish, or any other thing living in the river, and ignored the presence of the Indians,” Schmitt writes.

As a result of the logging industry, industrialization’s dam-building frenzy, and Maine’s paper and pulp industry, the species was close to extinction. The salmon’s breeding waters also were invaded by hundreds of hydropower dams during a phase Schmitt calls “hydromania” in the early 1980s.

The river’s condition was a catastrophe in the 1950s, Schmitt says, with one stretch “covered with floating wood chips [and] mats of stinking sludge…Like so many rivers across America [then] the Penobscot had been turned into…a conduit to carry the worst of what was thrown away.”

The paper industry fought tooth and nail to keep doing what it was doing with “no obvious effect,” they said, on salmon. But from 1955 to 1966, the author notes biologists had no knowledge of salmon in the Penobscot at all.

For decades, Schmitt says, Maine’s lawmakers and agency officials were heavily swayed by the paper mill industry and other manufacturers, with a shared mantra of economic growth.

By the turn of the 20th century, Schmitt says, Atlantic salmon was eliminated from all but 4 percent of its historical habitat. Hatcheries finally helped repopulate salmon on the river in the mid-1970s to the 1980s, mitigating the damage inflicted by industry and hydropower.

Schmitt, an environmental scientist and writer, and communications director for Maine Sea Grant, has an ability and agility to move easily from natural history and science to environmental politics—both Maine’s and federal—and even myth, retelling Penobscot Indian legends.

Along with describing decades of first-salmon gifts and each president’s policies affecting fish habitat, Schmitt offers often-droll observations of their food preferences and how White House chefs handled the received fish.

In a favorite chapter of mine, “Penobscot,” Schmitt narrates the route water takes and all it encounters—as if the reader is traveling, fish-like—through flat bogs and ferns, soft green slate, deep pools, gravelly bottoms (and, regretfully, dams also), picking up algae and mayflies along the way.

After reading this book, it seems nothing short of miracle that salmon, despite the hurdles of pollution and predators, spawn, grow and return to the sea only to head back up the same river.

Schmitt’s book is as thorough as a dissertation in its research and is also a well-crafted, dramatic historical and natural history narrative, with political deals and capitalist survival-of-the-fittest woven in—all involving one species on one unique river.

Linda Hedman Beyus is a Connecticut-based writer and editor. 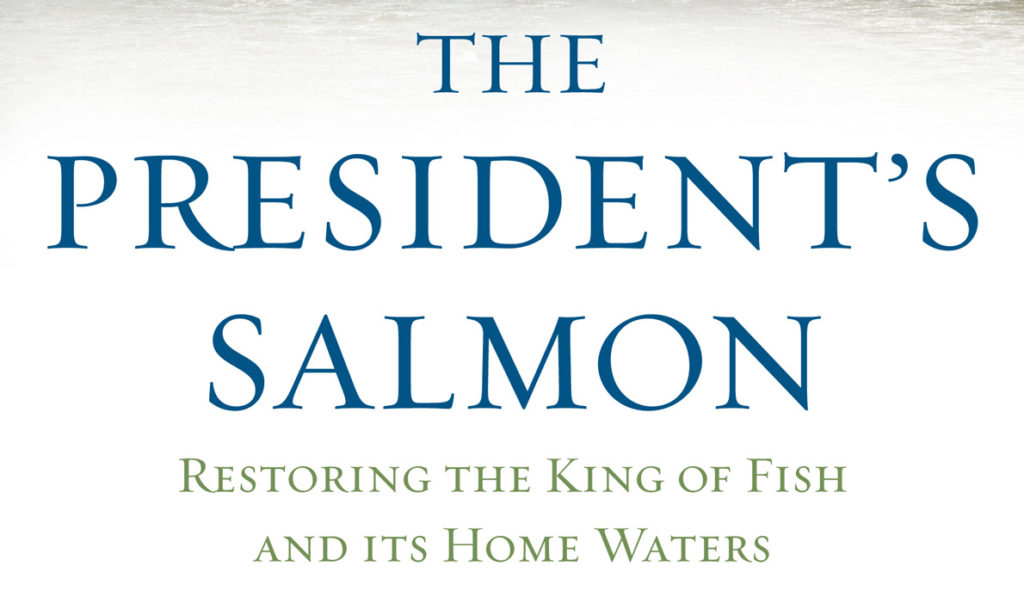