There are no safe bets in real estate speculation. But what may be close to a safe bet is investing in the 8-acre area on and adjacent to Rockland’s Tillson Avenue.

City officials are confident that some key, undeveloped or under-developed parcels in that area—which forms a peninsula just east of Rockland’s bustling Main Street—may change hands in the coming months. And when they do, new enterprises could be launched, which may trigger a flurry of other investment.

Of course, that optimism might be tempered by the fact that the city has been working for nearly 20 years to spur new development on and around Tillson Avenue. But 2016 may be the year.

“I’m hopeful that this will be the year that something happens,” said Audra Caler-Bell, the city’s community development director. “I think there’s been a lot of acknowledgment of the potential there.”

In recent years, more attention and effort have been aimed at the Tillson peninsula area, including the completion five years ago of a report drafted by the citizen economic development advisory committee.

That report led to zoning changes which included design standards for new buildings and upgrades, and which were aimed at encouraging mixed uses, such as retail, commercial, light industrial and even residential in this former industrial area.

Other goals were maintaining public access to the water and maintaining the city’s longtime working waterfront uses.

With Main Street thriving, the city wants to link that busy area to the Tillson Avenue area. “The idea is to really draw downtown activity to the waterfront,” Caler-Bell said.

Another big step forward came in 2012 when Rockland landed a $400,000 Environmental Protection Agency grant that paid for assessing soils for environmental hazards. Given the area’s industrial past, finding out what cleanup, if any, is needed at each site removes obstacles to development.

More recently, the city solicited ideas for redevelopment, publishing that request in May. This approach differs from the more common “request for proposals,” Caler-Bell explained, because the city doesn’t own any of the parcels of land and so can’t act to implement any development.

No developer or group submitted a formal presentation, she said, but the effort succeeded in generating interest.

“There was lots of interest from developers calling up and asking questions,” she said. Caler-Bell also circulated the city’s updated goals for the area through her professional networks. “I sent it out far and wide,” she said.

The city of Bath used a similar approach, she said, and it led to a new hotel on its waterfront.

Several buildings and lots are in play, including a 2.5 acre parcel with a building that last housed a plumbing supply house; a sprawling, one-story brick building that dates to the 19th century; a vacant lot near the water; and an older wooden building that would have water views.

“We’ve got a blank canvas,” Caler-Bell said of the properties. The peninsula includes a U.S. Coast Guard Station, but properties that are on the harbor are included in another zone.

Several of the properties are owned by groups that include Finlay Matheson, a Miami-based real estate investor. Matheson has been an enthusiastic participant in discussions about the redevelopment efforts, Caler-Bell said.

Frank O’Hara, president of Journey’s End Marina, which owns several properties on the peninsula, also is watching the redevelopment push with interest, she said.

One property in the zone already seeing significant investment is the site of the new Center for Maine Contemporary Art (CMCA) gallery. The nonprofit began building its new facility on Winter Street, just steps off Main Street, early in 2015, and the work is expected to be complete later this year.

And across the street from CMCA is a property owned by Dowling-Walsh, which operates a Main Street gallery. Dowling-Walsh plans a five-story structure to be connected to its Main Street building for art storage and sale.

Another piece of the pie is the city-owned fish pier, for which repair work has been planned, Caler-Bell said. “It’s getting old,” she said, but as one of the busiest fish landing piers in the state, she hopes it will win grant funding from state and federal sources. 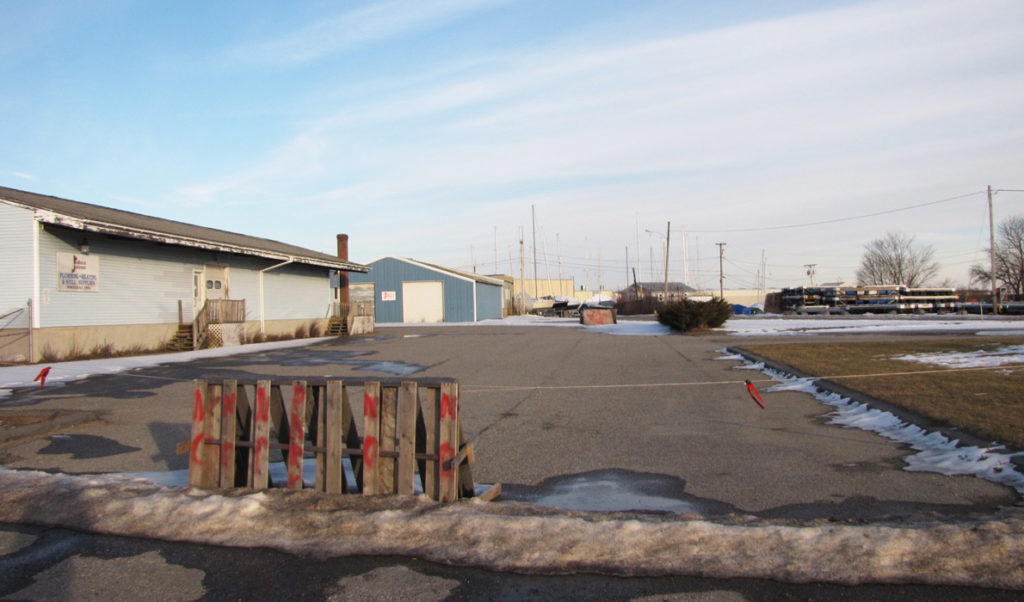 The site of a former plumbing supply house is vacant after the building sustained a fire. City officials are hoping to lure new investment in the area.