Walk into Planet Toys on Main Street in Rockland and it’s what you don’t see and hear that makes an impression.

The stock is aimed mostly at pre-teen kids, yet there is nothing blinking or buzzing. Most of the toys do not require batteries.

There are familiar games like Clue and Monopoly, a big selection of Legos, stuffed animals and animal figurines, kites and art supplies. The store seems consciously to be an alternative to chain retailers like Toys “R” Us.

Richard Aroneau, along with his wife Kit Remsen Aroneau, launched Planet in Camden in 1991 and then opened the store in Rockland in 2004. The Rockland store is closing this fall, but not because its stock is out of vogue with children.

No, it’s just another step in what has been an unconventional retail adventure for Aroneau, 65, and his family. But at the same time, he has learned a thing or two about what helps—or hurts—downtown businesses.

“A small town is a very complex, delicate thing,” he says, and a wrong move on the part of municipal leaders can “deaden the vitality.”

Rockland has not made those wrong moves. Instead, he says, city leaders have built the downtown economy on culture: the Farnsworth Art Museum, galleries and The Strand theater. That culture was expanded to include food; several restaurants whose reputations draw people from an hour’s drive away are now part of Rockland’s identity.

“That brings tremendous activity,” he says. “This is a business-friendly community. It’s one of the best Main streets in the state.”

So why close the Rockland store and maintain the Camden one?

“A business this size needs an owner/manager on site,” Aroneau explains. And he is only a part owner of the 4,000 square feet building.

“We were still marginally profitable,” he says, but more than anything, he wants to focus on an earlier passion, building a planned community in West Rockport.

“I did architectural restoration in Brooklyn, before Brooklyn was the hipster capital of the world,” he recalled, “when you could buy a Greek Revival for $30,000.”

His wife ran a store in Camden in the 1970s when she was still in high school. She closed it in 1982 when she moved to New York and met and married Aroneau.

When the couple came to Maine, he still had something else in mind. His mother-in-law had given her children land in West Rockport, and he and brother-in-law Richard Remsen were interested in developing a planned village on it.

“We’d been reading about the new urbanization,” he remembers, “a more pedestrian-friendly, human-centric way of living.”

But the deep recession of 1991 derailed their plans. Instead, Aroneau and his wife acted when a long-time tenant vacated a Camden storefront.

Rather than follow the model of catering to tourists or locals, they thought, “Why not a business that tries to reach both markets?”

All these years later, Aroneau chuckles at the boldness of calling the store Planet.

“We called it ‘Planet’ because we wanted to sell whatever we liked,” he said. The first store carried furniture, clothing and fine art, among other things. “We wanted it to reflect our tastes.”

A term that emerged for what they achieved is “entertainment retailing.”

When another long-time Camden store closed in 1995, Planet took over the space, and in the original location, launched Planet World Marketplace.

“Everything we sold was fun—and not very practical,” Aroneau recalled, including toys, men’s clothes, “gadgets” and lots of books.

Then they opened Aria, which featured “dressier, high-quality, designer clothes.”

Being able to operate three stores reflected the times, Aroneau said. Credit-card lender MBNA was at its peak employment in the area, the national economy was booming, there were no big box stores in the region and the Internet was more idea than reality.

“We had birthday parties in the store every weekend,” he said, and children approaching their special day would list favorites on a Planet birthday registry.

Along with the competition of shopping malls and the Internet, Camden itself changed. The YMCA and high school moved out of the downtown and MBNA began scaling back jobs there. The Knox Mill complex, where MBNA had its offices, is no longer a business hub.

“There are just fewer reasons for being downtown,” he says.

His advice for retailers revolves around passion and showmanship.

“People still value and cherish the everyday and serendipitous great conversation with someone” they encounter on the sidewalk or in a store, he says. “There’s that conviviality of Main Street.”

Walking on Main Street encourages a kind of browsing that’s different from browsing on the Internet, he says.

Aroneau believes Rockland will continue to “get it right,” and that the next step it will take is to reconnect Main Street with the working waterfront. 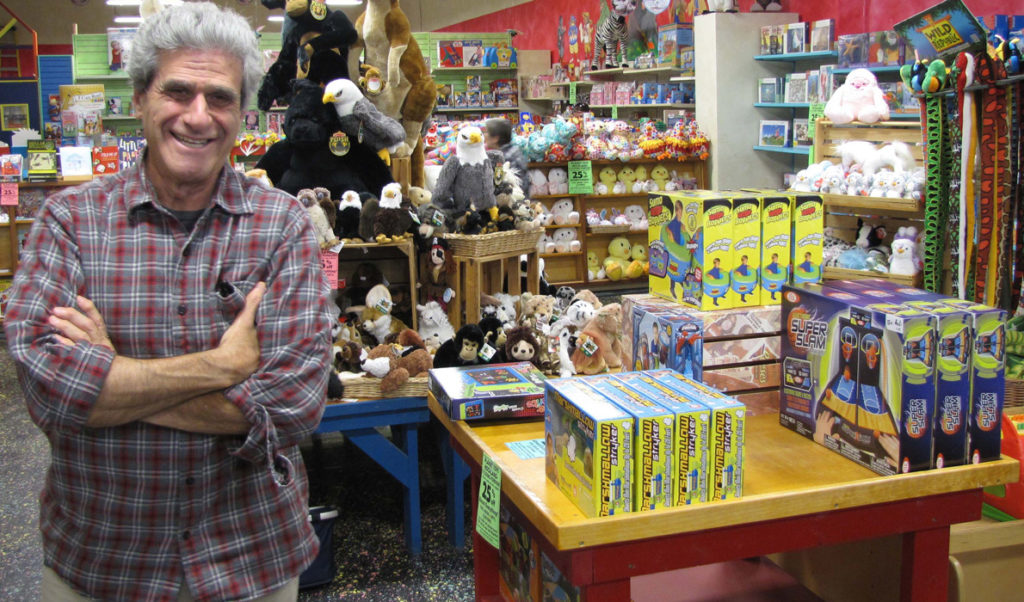